The brutal shooting of a cardiologist in a conservative central Anatolian city has pitted the health sector not only against the government but also the General Directorate of Religious Affairs. 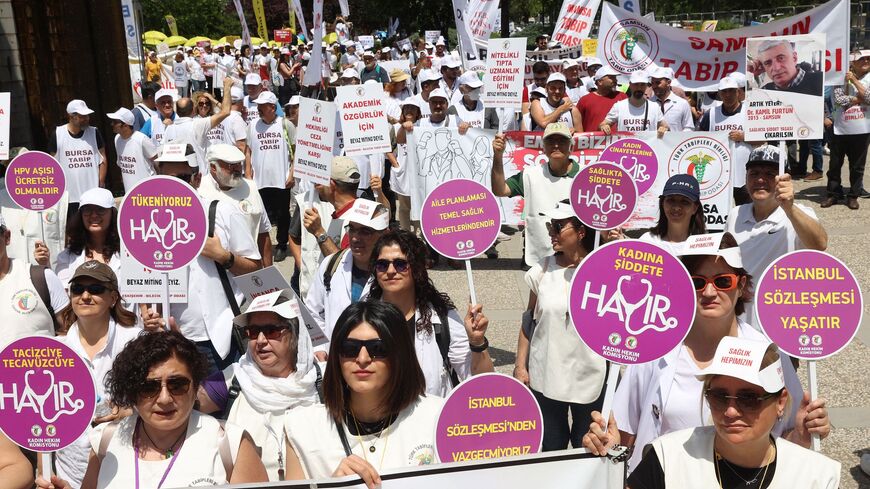 Health care workers protest, calling on the government to improve working conditions in Ankara, on May 29, 2022. - ADEM ALTAN/AFP via Getty Images

The crisis over the murder of a cardiologist in the conservative Turkish city of Konya continues to brew in Turkey, pitting the country’s beleaguered health sector not only against the government but also against the clergy.

Dr. Ekrem Karakaya, 47, was shot dead on July 6 by the son of a patient who held the doctor responsible for the death of his mother who underwent a heart operation a month ago. Hacı Mehmet Akcay also killed himself after firing at the doctor.

Within four days, more news of attacks on health personnel swept the headlines. These included a mob attacking a university hospital in the southern town of Adana and a patient threatening to kill his doctor “just like the guy in Konya” in a city in the northern province of Sakarya.

The recent wave of attacks came amid an upward spiral of violence against health professionals, which doctors' associations blame on the overwrought health system and the government policy of placing health personnel at gunpoint rather than mending the system. According to a report by the Health and Social Workers Union, Saglik Sen, at least 316 health care workers were victims of violence in 2021, mostly by patients and patients’ relatives. More than 100,000 doctors were verbally or physically assaulted in the last 10 years.

Karakaya’s murder spurred doctors’ protests and two-day health strikes across the country — the fifth this year over low pay, long hours and spiraling violence. The health sector’s grievances were further accelerated as the government, despite promises, failed to adjust their salaries as inflation soared in Turkey. Adding insult to injury, President Recep Tayyip Erdogan responded in early March to reports on the growing number of doctors fleeing Turkey due to difficult conditions, saying they were “free to go” and portraying them as either greedy or unpatriotic.

Government officials, particularly Health Minister Fahrettin Koca, expressed deep sorrow over Karakaya’s death but criticized the ensuing protests and the strike. Nationalist Movement Party chair Devlet Bahceli, Erdogan’s key political ally, claimed that the strike was unlawful. The far-right leader attacked the Turkish Medical Association (TTB), saying that it has “turned into a tool of separatism” and depicted the strike as an “evil-minded” attempt to “sabotage the health system.” Bahceli has been urging for years the closure of the left-leaning TTB, which represents more than 80% of Turkey’s doctors, claiming that it is linked to the outlawed Kurdistan Workers Party (PKK).

On the streets of Istanbul, police used tear-gas to disperse health officials who wanted to walk to the local health offices to protest the murder and what they called the overall government’s policy toward the health sector. “We are warning the police [which has attacked our march]. You are committing a crime. Don't stand before our mourning, our anger; remove the barricades,” tweeted the TTB.

On social media, trolls with links to the Nationalist Movement Party (MHP) and the government started a hashtag #CloseDownTTB, echoing Bahceli’s line that TTB supported terrorism. Like most everything in sharply polarized Turkey, the doctor's plight has created a vitriolic divide on those who support the strike and those who accuse the health sector of opportunism for stopping work at a time when COVID-19 cases have spiked and booster shots need to be administered to millions of Turks. Assurances from doctors’ groups that the emergency services would still be working and all services would be manned throughout the strike either fell on deaf ears or were pointedly ignored. The conflict was further fueled by a local imam in Konya who hinted that the doctors were getting what they deserved. “Yesterday none of the hospitals were on duty. Imagine that you went to the hospital for your son to get an injection or he will die. But the doctor tells you to go away since they are on a strike. Would you not kill him, beat him, swear at him?” Imam Ahmet Gur said in a video that went viral.

Health Minister Koca stepped in for the removal of the imam. “I have called [Ali Erbas, head of the powerful Religious Affairs Directorate known as Diyanet] twice, though he was at hajj, and Erbas said he would immediately send an inspector to Konya. I also spoke to the governor to start an investigation,” announced the unpopular health minister, who was booed when he tried to attend the murdered cardiologist’s funeral. “I will follow up on the inquiry,” he pledged.

While the Religious Affairs Directorate and the governor’s office announced that they had launched an inquiry into Gur, other clerics in Konya rallied to Gur’s support. Ali Koc, the Konya chair of Diyanet-Sen, the labor union of employees of the Religious Affairs Directorate, said that Koca should stop meddling in the affairs of Diyanet and focus instead on the “unpatriotic” doctors who undermined public health by their strike. “While we concur that the words of our colleague went beyond his intentions, we shall not abandon him,” Koc said, adding that Gur had been right in criticizing the strike.

After remaining quiet for six days, Erbas, the powerful head of the Diyanet, admitted that the remarks made by Gur were inappropriate for an imam, stating that “what needed to be done would be done.” An official from Konya who requested anonymity told Al-Monitor that Gur had been removed from duty.

But for Dr. Figen Alkor, a retired family doctor who lives in Izmir, the plight of the doctors is far from over. “If my daughter opts for studying medicine, I would discourage her,” she told Al-Monitor. “I do not want to have a pounding heart each time the phone rings. It is not enough that we have become punching bags; we are now painted to be unpatriotic or even terrorists if we ask for our rights.”