Turkey rolls out homegrown vaccine amid surge in Omicron cases

Turkish health officials claim the vaccine Turkovac is efficient against Omicron, while experts warn of a lack of data. 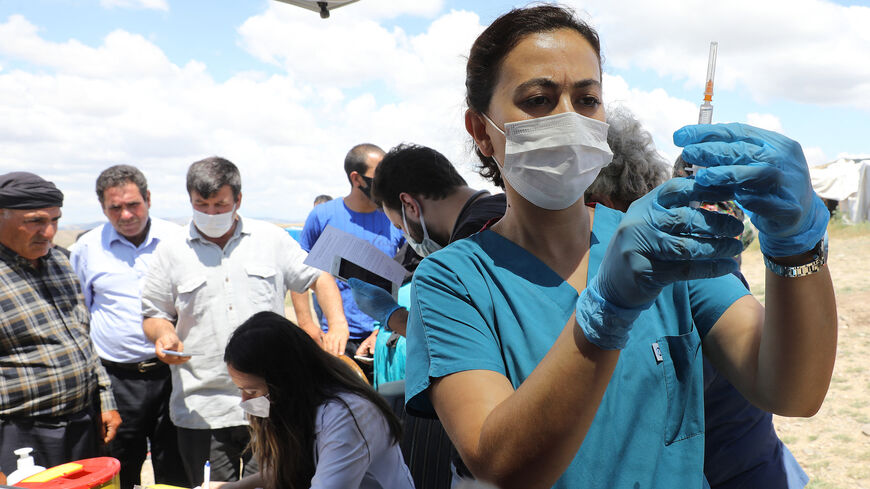 A nurse prepares a syringe with Sinovac's COVID-19 coronavirus vaccine during a vaccination campaign in the village of Oguzlar, a hundred kilometers from Ankara, on July 8, 2021. - ADEM ALTAN/AFP via Getty Images

Turkey, recording a six-month peak in its COVID-19 infections due to the spread of Omicron, rolled out its homegrown vaccine, Turkovac, with the assurances that it was “efficient” against the new variant.

“Though we have an increase in the people who have been infected largely due to the new Omicron variant, there are fewer people hospitalized and fewer deaths,” President Recep Tayyip Erdogan said after a three-hour Cabinet meeting Jan. 3, where the main issues were health and the much-awaited 30% increase in civil servants’ salaries.

Despite the Turkish Statistics Institute’s announcement earlier Monday that Turkey’s yearly inflation climbed by the fastest pace in 19 years, jumping to 36.8%, Erdogan determinedly painted a rosy photo on Turkey’s strengths. Saying that Turkey’s exports and economic growth soared despite the pandemic, the president trumpeted the new “national and local” vaccine, whose emergency use was authorized Dec. 22 despite misgivings from local medical circles.

“With Turkovac, our homegrown vaccination, now at the service of our people, we have nothing to fear from the pandemic as long as people continue with social distancing and hygiene,” Erdogan said, as his health minister and medical experts warn of a new peak in COVID-19 cases.

Earlier Monday, Turkish-speaking Twitter was flooded with the news that Ali Koc, chairman of Turkey’s popular Fenerbahce soccer team and one of the country’s biggest business moguls, tested positive for COVID-19. The daily cases of infections recorded surged past 44,000 on Monday, marking a steep increase partly driven by Omicron, the new and highly contagious variant that is partly responsible for the surge in COVID-19 cases in Turkey.

Professor Ates Kara, director of the Turkish Vaccine Institute and a member of the Health Ministry’s scientific board on COVID-19, told the state-run Anadolu news agency that the antibodies produced by Turkovac booster shots provided sufficient protection against Omicron. “Interpreting the data we have obtained on the studies so far, the antibody levels appear to provide protection against Omicron, but our studies continue,” Kara was quoted as saying at the vaccine's manufacturing facility in the southeastern province of Sanliurfa. “But it is not possible to say how long [this protection] will last."

Turkey has already administered more than 130 million doses of vaccines, using shots developed by China's Sinovac and by Pfizer/BioNTech. It is now offering Turkovac, Sinovac and BioNTech booster shots.

Many medical organizations, such as the Turkish Medical Association (TTB) and the Turkish Thorax Association, have expressed their concern on what they called an intransparent and fast authorization of the homegrown vaccine, criticizing the government for concealing data of the critical phase 3 from the review of local and international medical experts. “I hope Turkovac gets the approval of the World Health Organization (WHO) as quickly as possible,” said Tugrul Erbaydar, board member of the Public Health Experts Association. “Vaccines that receive national authorization but fail to get international authorization, such as Russia’s Sputnik, not only impact people’s health but damage the country’s credibility.”

But Ankara remained impervious to the criticism. A day before New Year’s Eve, media-savvy Health Minister Fahrettin Koca posed for cameras as he rolled up his sleeve to receive a booster shot of the vaccine that was developed in cooperation with the state-run Turkish Health Institutes and Kayseri Erciyes University.

Following the minister’s footsteps, Turkish Health Institutes chair professor Erhan Akdogan also received a shot as he told journalists that Ankara had “started the process” with the WHO for approval. “We sent the information [to the WHO] and are now getting feedback,” he said Dec. 30. “We will then send the data they request.” Currently, Turkovac is listed under “vaccine candidates” on the WHO list that tracks vaccine trials.

Erdogan has said in the past that Turkovac would be made available globally, but without detailed information about the vaccine's efficacy rate or results from clinical trials, this seems dubious. Akdogan said that the first country to receive Turkovac might be Azerbaijan. “We were already conducting joint scientific studies with foreign countries such as Azerbaijan, Pakistan and Kyrgyzstan a few months ago. … In recent weeks, we have completed our preparations for this in Azerbaijan, and we plan to transmit our Turkovac vaccines there as part of a joint scientific research platform in the near future,” he told Anadolu agency.

Turkovac, previously known as ERUCOV-VAC before Erdogan renamed it in June, was developed by a team of scientists led by professor Aykut Ozdarendeli. Forty-four volunteers participated in the first phase in November 2020, and 250 in the second phase in February 2021. With both phases showing positive data, Turkish authorities moved onto phase 3 of the development process in June, when “thousands” of volunteers who had not been infected with COVID-19 nor vaccinated before were administered Turkovac shots. In parallel, shots were administered to volunteers in 41 hospitals in 28 provinces of the country. These were selected from healthy individuals aged 18-59 years who were not infected and had received two doses of the Sinovac vaccine. As booster shots, half received Turkovac and the other half Sinovac.

“We do not know the data of phase 3; we do not know how the authorization of emergency use was given,” said TTB chair Sebnem Korur Fincanci, adding that even the exact number of people who participated in phase 3 and interim data had not been disclosed.

“We welcome and congratulate the Turkish scientists who developed this vaccine,” Fincanci told Al-Monitor. “But it is of crucial importance that people trust the vaccine, and this can only be done if scientific data is shared at local and international levels. Otherwise, the pollution of information would only create more antivaxxers and vaccine skeptics.”

Erdogan insists that the national and local jab would alleviate the concerns of antivaxxers in the country. “I know that there is a group of our citizens that hesitate — albeit in groundless thought — to get a COVID-19 vaccine,” he said after the Cabinet meeting. “With Turkovac, which has been produced by our own scientists in Turkey, I call upon those citizens to get their jabs as soon as possible.”

The antivaxxers in Turkey are a heterogeneous group that range from left-wing conspiracy theorists to arch-conservatives. They have held nationwide demonstrations in which they shouted slogans against Bill Gates or repeated the baseless claim that Microsoft used vaccines to implant trackable microchips into people.

Koca, who issues terse Twitter messages to the public on the pandemic, warned Turks about the rapid increase in COVID-19 cases and urged them to get their booster shots. “The daily virus cases throughout Turkey might reach 60,000-70,000 soon amid a growing prevalence of the Omicron variant,” he told Haberturk TV Dec. 31. This means a return to April 2021 levels, which was followed by curfews and weekend lockdowns throughout May.

For Turkey’s overwrought doctors, the number is likely to be double, particularly after the government failed to curb New Year’s Eve celebrations, which are traditionally marked with street parties in the country’s major cities of Istanbul, Ankara and Izmir.

“Omicron, which is more contagious than any other variant of COVID-19, has created this new surge in Turkey, like elsewhere in the world,” Lutfi Camli, chair of the Izmir Medical Chamber, told Al-Monitor. “This was a peak everyone saw coming, and many of the countries have reinstated measures or obliged vaccinations for certain groups.”