And: required reading to understand the last two decades in the Middle East: the 'Axis of Evil' speech 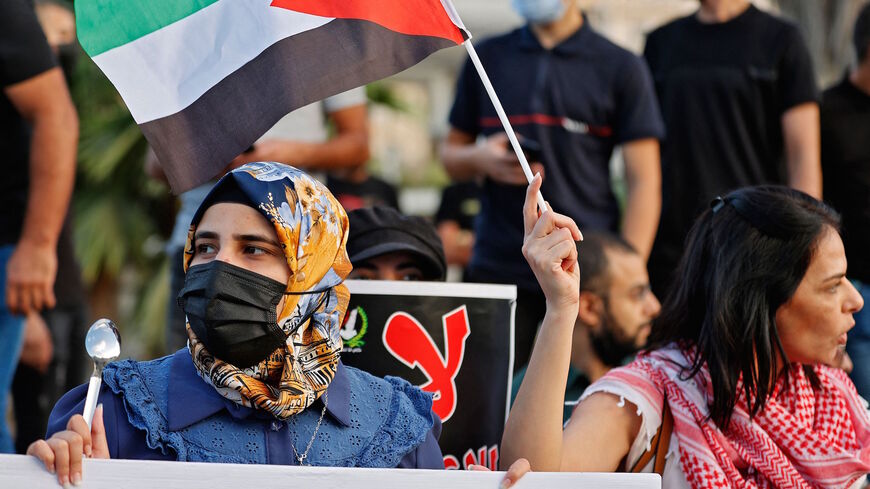 Arab Israeli protesters lift Palestinian flags and spoons, reportedly the digging tool used by six Palestinian prisoners who escaped from Israel's Gilboa prison, as they demonstrate in the mostly Arab city of Umm al-Fahm in northern Israel, on Sept. 10, 2021, to denounce punitive measures taken by the Israel Prison Service against Palestinian prisoners following the jailbreak. - JACK GUEZ/AFP via Getty Images

The escape of six Palestinian prisoners from an Israeli jail on Sept. 6 has united Palestinian public opinion, confounded Israeli security services and could spark a new round of clashes with Israeli forces.

The prisoners, all from Jenin in the West Bank, include Zakaria Zubeidi, the former chief of Palestinian security in Jenin, and five members of Islamic Jihad, all of whom were serving long sentences on terrorism-related charges.

Late Friday evening, two of the prisoners, Islamic Jihad members Mahmoud Aradeh, who is presumed to be the mastermind of the escape, and Yakub Kadari were caught in Nazareth, prompting rocket fire from Gaza.

The convicts have become folk heroes for pulling off a seemingly impossible escape from Israeli captivity, and their escape united Palestinians in protesting Israeli treatment of prisoners.

"The escape bolted public opinion in a way not seen for years," writes Daoud Kuttab. ‘Palestinian Prime Minister Mohammad Shtayyeh told journalists that every prisoner wishes to be free and that Israel should free all prisoners…The combination of Fatah [the ruling party of Palestinian President Mahmoud Abbas based in the West Bank] and Islamic Jihad [an Islamist faction based in Gaza] — a collaboration that used to be strong — has reignited ideas of combined acts of resistance."

Hamas, an Arabic acronym for the "Islamic Resistance Movement," which rules in Gaza, had called off demonstrations at the Israeli-Gaza border to give Egyptian and Qatari mediators a chance to negotiate a lessening of the Israel restrictions on trade and travel, as Mai Abu Hasaneen reports from Gaza, and as we discussed here last week.

But following the prison break, Hamas and Islamic Jihad have changed their tune, picking up the cause of the prisoners. Hamas has since called for "days of rage" as sometimes violent demonstrations and clashes with Israeli security forces occurred this week in Hebron, Jenin, Jerusalem and elsewhere in the West Bank.

Palestinians affiliated or aligned more with Fatah and the Palestinian Authority have also used the escape as catalyst to protest mistreatment of Palestinian prisoners in Israeli jails and the conduct of Israeli forces in response to the escape, as we report here.

Ben Caspit writes that although the jailbreak had until the arrests of the two escapees made a "mockery" of Israeli security services, the fragile Israeli governing coalition led by Prime Minister Naftali Bennett and Foreign Minister Yair Lapid has yet to be dinged politically by the high profile escape and manhunt.

But if the manhunt continues indefinitely for the remaining four, or if there is more political violence Bennett, according to Caspit, will be walking in a political minefield.

"Former Prime Minister Benjamin Netanyahu and his acolytes have so far been unable to pin the escape fiasco on the new government for the simple reason that it was not directly responsible for the alleged ridiculous amateurism of the prison service and the deep flaws exposed by the escape. But if the event deteriorates into violence, exposing the fragile government’s weakness, Bennett could find himself in trouble," writes Caspit.

Bennett’s "diverse coalition will not survive a single round of violence sparked by the escape. Knesset member Mansour Abbas, head of the Arab Islamist Ra’am party in Israel that is ideologically close to the Islamist Hamas in Gaza, might find it difficult to remain in government and provide his party’s continued support if bloody clashes break out between Arabs and Jews," adds Caspit.

Remembering 9/11: the Axis of Evil speech

In recalling the impact of the Al-Qaeda terrorist attacks on the United States on Sept. 11, 2001 on the Middle East, it is worth revisiting the Jan. 29, 2002, State of the Union address by President George W. Bush, now remembered as the "Axis of Evil" speech.

For US policy in the Middle East,  9/11 begat the Iraq war, which in turn gave new life to Al-Qaeda amidst the post-war collapse of Iraqi institutions and society.

Al-Qaeda’s progeny includes the Islamic State, which overran large parts of Iraq and Syria between 2014-2017, before being defeated by the US-led coalition.

The speech is the most jarring and impactful of any State of the Union in recent memory, especially when recalling the times — just four months after 9/11.  Bush used unusually direct language to convey a new focus for US national security policy — going after state sponsors of terrorism to preempt a threat to the United States.

The speech interestingly begins with a note of triumphalism about the US defeat and overthrow of the Al-Qaeda affiliated Taliban government in Afghanistan, saying that "we are winning the war on terror" and "the American flag flies again over our embassy in Kabul. Terrorists who once occupied Afghanistan now occupy cells at Guantanamo Bay."

Bush welcomes Hamad Karzai as "leader of a liberated Afghanistan" and notes that Afghan women and girls are now free from being "captives in their homes" by the Taliban.

Bush says that priorities in the new US "war on terror" will not only be to "shut down terrorist camps, disrupt terrorist plans and bring terrorists to justice," but to "prevent regimes that sponsor terror from threatening America or our friends and allies with weapons of mass destruction."

Those "regimes," Bush explained, are Iraq, Iran and North Korea — and especially Iraq.

"States like these, and their terrorist allies, constitute an axis of evil, arming to threaten the peace of the world," Bush said. "By seeking weapons of mass destruction, these regimes pose a grave and growing danger. They could provide these arms to terrorists, giving them the means to match their hatred. They could attack our allies or attempt to blackmail the United States. In any of these cases, the price of indifference would be catastrophic."

Bush puts down a marker for preemptive action to deal with threats from terrorists and their state sponsors: "We will not wait on events while dangers gather. I will not stand by as peril draws closer and closer. The United States of America will not permit the world's most dangerous regimes to threaten us with the world's most destructive weapons."

"Our war on terror is well begun, but it is only begun," he said. "This campaign may not be finished on our watch, yet it must be and it will be waged on our watch."