The escape of six Palestinians from a maximum security Israeli prison jolted observers. 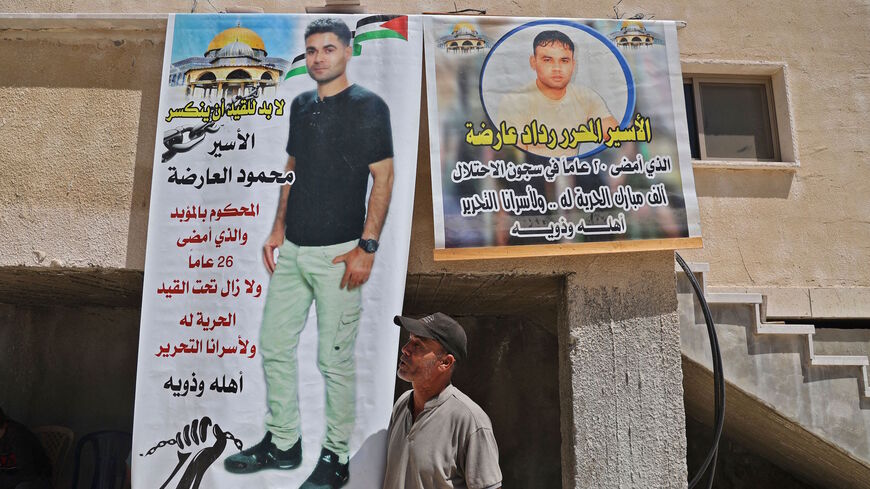 A relative of Mahmud al-Ardeh, one of six Palestinian prisoners who escaped from Israel's Gilboa prison, stands next to a banner showing him (L) and another prisoner, Raddad al-Ardeh, by his home in the village of Arabah, south of Jenin in the occupied West Bank on Sept. 8, 2021. - JAAFAR ASHTIYEH/AFP via Getty Images

The Palestinian situation was dire in many ways. The new Israeli coalition government made it clear it was not going to have any diplomatic talks with the Palestinians. In fact, the high-level meeting that the Israeli government agreed to between Israeli Defense Minister Benny Gantz and Palestinian President Mahmoud Abbas in Ramallah was in fact held in the nearby Civil Administration military compound, a few miles from Abbas’ home and from headquarters of the Palestinian presidency, known as the Muqata.

The short 11-day duel between Israel and Hamas had produced no concrete results, as Israel has insisted on regaining its prisoners and the bodies of soldiers held by Hamas. With little development bridging the gap between both sides, the situation for the blockaded Gazans looked dire, too. Palestinians were also angry with their own leadership, whom they blame for not engaging with the people and for canceling national elections that were long overdue anyway. Even the little freedom of expression and assembly that Palestinians had often boasted about was being curtailed as the security-minded Abbas leadership was not having any of the public protests against their actions, one of which had caused the death of a Palestinian critic while in the hands of their own security officers.

In a totally unexpected and what appears to have been innovative act, six Palestinians who were expected to spend most of their lives in prison found a way to break out of the maximum security Gilboa prison in the north of Israel and inside the Green line — a violation of international law that requires occupiers to keep prisoners in jails in the occupied territories. The escaped prisoners — five members of Islamic Jihad and one leader of the Fatah Al-Aqsa Martyrs brigades — are all from the northern Palestinian town of Jenin.

It is unclear how they escaped, whether they actually dug the entire tunnel that led to a street outside the prison, or if they used water and utility ducts to sneak out. The breakout occurred after midnight and apparently a guard who was supposed to watch them was asleep. Israeli media said they must have walked about 3 kilometers (2 miles) to the Arab village of Naura where they bought supplies and found a family that allowed them to shower. Zakaria Zubeidi, one of the escapees who was a Fatah leader, smiled while relaxing in front of a security camera shortly after the escape with a towel around him, in an apparent act of defiance knowing that the Israelis would collect images from all cameras.

The Israelis have deployed a large number of soldiers even though it comes at a time of Jewish holidays. For Israel, the best scenario is that the prisoners are captured and imprisoned again. The next best scenario is that they escape to a nearby Arab country. However, the two feared scenarios are that the escapees might carry out an armed act of resistance or that they will be involved in an armed battle with Israelis. Palestinian activists from Fatah and other parties in Jenin have been on high alert in case the prisoners make it to their city and they have vowed to defend them. From the Gaza Strip, Islamic Jihad threatened Israel that they will not let anything happen to the prisoners — such an escalation could easily reignite a new round of Gaza-Israel military attacks of rockets and shellings.

The escape bolted public opinion in a way not seen for years. Palestinian Prime Minister Mohammad Shtayyeh told journalists that every prisoner wishes to be free and that Israel should free all prisoners. When Al Jazeera reporter Guevara Budeiri was asked about security coordination, she said that there was no coordination at all with the Israelis. The combination of Fatah and Islamic Jihad — a collaboration that used to be strong — has reignited ideas of combined acts of resistance.

After initially holding off on arresting relatives of the escapees in the hope that they can listen in on conversations with the prisoners, Israel arrested parents and brothers of the detainees. A number of family members whose relatives are in jail told Al-Monitor that the imprisoned relatives are likely to be held for information gathering, pressure on the escapees and might be used possibly as human shields if a battle with armed prisoners takes place.

The situation in Israeli prisons has been volatile since the jailbreak, with guards appearing to take revenge on those under their control, and in return the prisoners have protested. In one prison in the Negev Desert prisoners burnt the contents of their own cells in an act of protest to the Israeli guards’ harsh treatment.

Attempts at buying time and punting the political ball down the hill by providing humanitarian services will not work. On the contrary, by delaying the political process the United States and Israel are denying Palestinians hope, leading to unpredictable consequences.