The Takeaway: Bennett has opening to sway Biden administration on Iran nuclear deal 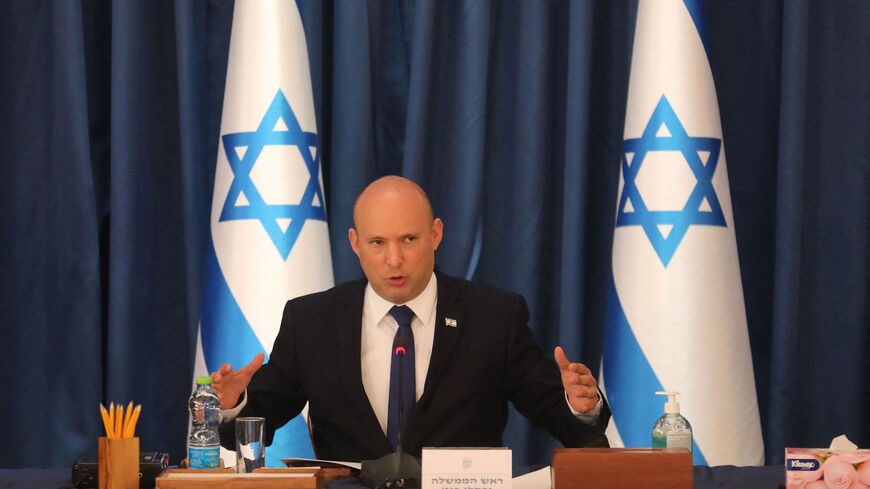 Israeli Prime Minister Naftali Bennett is meeting US President Joe Biden on Thursday, and it’s no surprise that Iran and Hezbollah will be at the top of their agenda. Bennett, writes Ben Caspit, will try to get Biden’s support for Israel’s "strategic plan" to contain Iran, block its nuclear weapons aspirations and rein in what Jerusalem sees as a regional campaign of subversion, including via Hezbollah in Israel’s northern neighbor, Lebanon.

What’s new? Bennett’s visit comes as all talks on the Joint Comprehensive Plan of Action (JCPOA), or Iran nuclear deal, have hit a dead end. This may be an opportunity for Bennett. As recently as last month, the buzz was that the United States, the EU and Iran were close to signing off on a resurrection of the JCPOA, which President Donald Trump abandoned. But Iran couldn’t, or wouldn’t, close the deal under President Hassan Rouhani, and the nuclear file now sits with his more hard-line successor, Ebrahim Raisi, whom Bennett has called the "Hangman of Tehran," referring to Raisi’s role in mass executions of dissidents in the 1980s.

Hezbollah as tie-breaker. Iran has a de facto presence on Israel’s border, with Lebanon’s Hezbollah acting as a kind of subcontractor for Iran. In recent years, an uneasy truce with the "Party of God" has begun to fray, as evidence accumulates that Hezbollah has acquired, and is expanding, its arsenal of precision missiles. Some Israeli security sources refer to this capability as a "tie-breaker," according to Caspit. The missile production facilities are located in Lebanon as well as Syria.

Our take. Bennett may be knocking on an increasingly open White House door with regard to Iran. Informed Israeli sources tell us there may be more receptivity to the case that the JCPOA is less relevant to US strategy, at least in the near term. The United States must now consider its own contingencies while Iran operates its nuclear program outside of the constraints of the JCPOA. Raisi does not seem in a rush to broker a deal either. That could change, but the passage of time strengthens Israel’s case by making it seem Iran is playing for time. With regard to Hezbollah, the United States hasn’t objected to Israel's bombing of Hezbollah sites in Syria. Lebanon carries more risk, however, given its political and economic fragility. Israel, as part of its security discussions with the United States, will nonetheless continue to seek support — via sanctions, conditionality or other means — for its efforts to curb Hezbollah’s missile facilities.

Many of Iran’s allies regarded Hossein Amir-Abdollahian, Iran’s new foreign minister, as the most prominent diplomat of the "resistance axis" of those countries challenging Israel and the United States in the region, writes Ali Hashem. His personal relationship with Hezbollah Secretary-General Hassan Nasrallah "saw the two men meeting on some occasions until dawn, per Amir-Abdollahian’s account. The diplomat and Qasem Soleimani, the late top commander in Iran's Islamic Revolutionary Guard Corps, also had a close personal relationship. His latest book on Syria, "Sobhe Sham" ("The Morning of Syria"), was written upon the request of the late Quds Force commander, who was killed by a US drone strike in Iraq in January 2020.

The Taliban's rapid takeover of Afghanistan was welcomed by the Sunni extremist group Hayat Tahrir al-Sham (HTS), designated by the United States and the UN Security Council as a terrorist organization. HTS controls much of northwest Syria’s Idlib province. As Sultan al-Kanj and Amberin Zaman report, the celebratory mood could be felt across the region as local preachers lauded the Taliban’s success and HTS handed out sweets in the streets of Idlib.

Taqi al-Din Omar, a spokesperson for HTS, told Al-Monitor the situation in Afghanistan echoes Syrians’ calls for freedom. “Any liberation movement in the world gives us hope that there are still free people out there who intend to live in freedom of dignity.”

3. … While trying to shore up their own terrain in Syria

HTS is trying to expand its influence outside Idlib, imposing measures that restrict the movement of goods and people from areas of northern Syria under the control of the Turkey-backed Free Syrian Army, writes Khaled al-Khateb. As part of that effort, the jihadis’ so-called Salvation Government recently banned the entry of certain vegetables coming from FSA-controlled areas in the Aleppo countryside.

Khateb also reports on HTS-affiliated jihadis from Uzbekistan who are carrying out attacks on Syrian government forces. The extremist group has yet to claim responsibility for any of the Uzbek attacks, raising questions about the extent to which HTS controls their movement. Plus, read up on the growing discontent against HTS over death sentences issued to two young men accused of collaborating with the US-led coalition fighting the Islamic State.

A Gazan man has turned to TikTok to document harsh living conditions in the impoverished coastal enclave. Ibrahim Barbakh, who on TikTok goes by the handle Abu al-Ghalaba (Arabic for "father of the poor"), told Zuheir Dolah he’s made hundreds of videos highlighting the suffering in the Gaza Strip and what he says is a lack of action by Palestinian authorities.

TikTok also made headlines in Egypt after the country’s top fatwa authority, the Dar al-Ifta, created its own account. Abdulla Kadry reports that the Egyptian religious body is hoping to use its new TikTok account to roll out fatwas to a bigger audience. But the Dar al-Ifta’s use of an app famous for its dance videos has raised eyebrows in a country that jails female influencers for posting “indecent” TikTok content.

Entsar Abu Jahal has the reaction inside Gaza to Israel’s recent seizure of 23 tons of chocolate bars that were headed for the Hamas-run enclave. Palestinian citizens and activists took to Twitter to mock Israel's candy confiscation after Israeli Defense Minister Benny Gantz said Gaza’s rulers were using chocolate sales to finance their military operations.

Unsurprisingly, Hamas dismissed the accusations as “lies to justify the unjust siege imposed on the enclave.” Israel, which has maintained a blockade on the Hamas-run Gaza Strip since 2007, restricts the import of “dual-use” goods that could have a military purpose. Earlier this month, Israel loosened trade and travel restrictions on Gaza.

5. What We’re Listening To: Libya’s path ahead

Stephanie Williams, the former acting United Nations envoy to Libya, discusses foreign intervention in the civil war, Gen. Khalifa Hifter’s waning influence in Libya, and whether Turkey and Russia can play a constructive role in the fragile peace process. In an interview with Andrew Parasiliti, Williams explains how the Biden administration can use its “diplomatic muscle” to ensure Libya's upcoming elections are free and fair. Listen to the podcast here.

It’s hard to miss ​​Fathi Salman Abu Gharaba’s colorful single-seater sand race car speeding across the Gaza Strip. It took the grocery store owner seven months to build, in part because Gaza’s frequent power outages prevented Abu Gharaba from working for long stretches. Tracking down spare parts was also a challenge. Israel, which maintains a strict blockade on the Palestinian territory, has prevented the entry of new cars and spare parts since its 11-day conflict with Hamas in May.

By using rudimentary tools and secondhand materials he scraped together from Gazan junkyards, Abu Gharaba managed to assemble the race car in his home workshop. “I did everything with my bare hands, even bending the steel parts for the car body,” he said. Learn more about the car Abu Gharaba named “Desert Race” in this video.

A year after the devastating explosion that tore through Beirut, the World Bank is recommending digitalization as “one of key foundational stones for the reconstruction and modernization” of the port of Beirut. Digitizing its operations will reinforce anti-corruption practices, improve regulatory oversight and increase transparency over the storage of hazardous chemicals at Lebanon’s most vital port, the bank says. Officials blame the August 2020 blast on a stockpile of improperly stored, highly explosive ammonium nitrate. Read the World Bank report here.

The Taliban still harbors elements of the al-Qaeda group, but according to the US Defense Intelligence Agency, it is downplaying that relationship to ensure a complete withdrawal of US troops. Nearly two decades after 9/11, US military officials warn that al-Qaeda could resurge in Afghanistan. As Central Command chief Gen. Kenneth McKenzie said in June, if “left unmolested, [al-Qaeda] are certainly going to rebuild, restrengthen themselves, and we have no reason to doubt they … want to attack us in our homeland.” For more, check out the latest inspector general’s report on the US mission in Afghanistan.