Prime Minister Naftali Bennett and his government are confronted with the double challenge of rehabilitating ties with the Democrat Party and mending the rift with the American Jewish community. 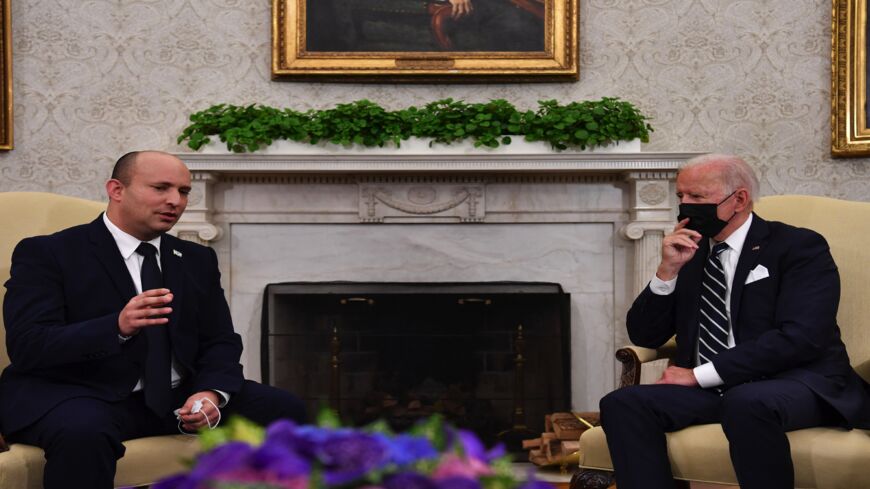 US President Joe Biden meets with Israeli Prime Minister Naftali Bennett in the Oval Office of the White House in Washington, DC, on Aug. 27, 2021. - NICHOLAS KAMM/AFP via Getty Images

Two almost simultaneous incidents this past week could have easily provided fodder for "Saturday Night Live." On Sept. 21, the House of Representatives' failure to vote on a bill replenishing Israel’s Iron Dome missile defense system unleashed harsh criticism of Israeli Prime Minister Naftali Bennett by his predecessor, Benjamin Netanyahu, and his Likud party lawmakers. Meanwhile, a clip making its viral way on social media showed Netanyahu, his head slumped and eyes closed, in an apparent mockery of President Joe Biden for allegedly nodding off during his recent White House meeting with Bennett.

Even as Netanyahu was deriding the president of the United States — the Likud subsequently issued a statement saying he had meant to mock Bennett, not Biden — his followers took to the airwaves and social media to insist that under Netanyahu, former Democratic President Barack Obama actually increased military funding for Israel, whereas now that Bennett is in charge, the United States is holding up vital military aid. This petty political wrangling could have been amusing were it not a fact of daily political life in Israel.

Just two days after pressure by progressive Democratic lawmakers prompted the removal of the Iron Dome funding from a spending package aimed at preventing a government shutdown, the House voted overwhelmingly (420-9) in favor of a standalone Democratic bill approving the aid to Israel. The outcome had been clear to begin with despite the procedural delay, but the incident nonetheless highlighted the erosion in the once-solid bipartisan congressional support of Israel. In a rare move, a group of progressive Democratic lawmakers, most of them openly critical of Israeli policies, embarrassed a Democratic administration and the party’s traditional Israel supporters, marking a trend likely to develop into a harsher split within the party.

Netanyahu is trying to make political capital out of this disagreement when in fact he is widely considered a factor in undermining the longstanding bipartisanship. His 12 years in office gradually deepened the gap between the two staunch allies Israel and the United States, made clearer now that a more liberal administration is back in office. The schism between a significant number of US Jews and Israel is also widening and threatening to turn into a permanent rift. Right now, the problem is still tactical in nature. Down the line, it will become strategic. To sum it up, if Israel continues on the current path it has chosen, it risks losing its greatest strategic asset: the alliance with the United States of America.

Israel’s new “anyone but Netanyahu” government should have augured change in this regard as it set out to turn the page and heal the damage of the Netanyahu years. Last month’s Biden-Bennett meeting was supposed to launch a comprehensive revamping of relations between Israel and the Democrats, but good intentions might not suffice. The deep ideological differences dividing these two entities have been swept under the rug for now, as Biden and his people, many of them veterans of the Obama administration stung by their experience with Netanyahu, relish Netanyahu’s defeat. But for how long?

Take, for example, the clear discomfort of some in Washington over Bennett’s repeated declarations that his government would never negotiate with the Palestinians. Why, they wondered, does he have to reiterate this position with such determination when he knows it contradicts the stand of all American presidents? After all, they added, even former President Donald Trump’s “deal of the century” foresaw the eventual establishment of a Palestinian state.

It’s not that the Americans think negotiations with the Palestinians are feasible right now, but they do believe Israel should be more understanding of the complexities involved. While hardly amounting to discord between the sides, along with the satisfaction over the determination by Bennett and his political partner and foreign minister, Yair Lapid, to turn the page on relations with the United States, some in the White House were slightly disappointed at Bennett’s failure to understand the president’s constraints. “Bennett is not the only one with public opinion and a political base; Biden has them too,” a Biden official said on condition of anonymity. “The very slim Democratic majority in the Senate and not such a large one in the House means that attempts by the progressives to embarrass the administration must be nipped at the bud.”

The (slight) delay in approving the replenishment of Israel’s Iron Dome interceptor stocks is supposed to convey this delicate and complex message to Bennett. The American president is up to his neck in weighty strategic concerns vis-a-vis China and other issues, and he cannot afford the domestic political damage of glitches on the Israel front, such as clips showing violence by West Bank settlers against Palestinians and alleged trigger happy (in the US view) Israeli soldiers shooting at Palestinians, and the repeated declarations ruling out negotiations with the Palestinians. While the Americans do not entertain high hopes of Israeli-Palestinian negotiations, they would like to see a type of “industrial peace” with the sides abstaining from provocations of the type that currently occur too often.

A bigger and far more momentous issue hovers over US-Israel relations beyond the somewhat trivial current affairs: Will the gradual but persistent distancing between the United States and Israel continue? This fissure is not linked to immediate political changes, such as Netanyahu’s replacement by Bennett, but to Israel’s sharp shift to the right. The Jewish State of 2021 is still a true and vibrant democracy, but it's far less liberal and more religious and conservative than ever. This — along with the significant demographic changes in the United States — is apparently the true cause of the ongoing rift between Israel and the Democrats and the very troubling distancing between Israel and significant chunks of US Jewry, who can no longer identify in Israel what made them view it as their second home.

Bennett cannot block this continental divide. His government will try to restore the arrangement on which the Netanyahu government reneged after approving it, which allocates a place at the Western Wall, Judaism’s holiest site, for pluralistic prayer (for example, by men and women together). It might also try to push for approval of conversions to Judaism by Reform rabbis. Such moves would rebuild the growing crack in the trust between the Jewish State and the world’s second largest Jewish community, but they are unlikely to provide a long-term fix to the problem.