Israeli Prime Minister Naftali Bennett was hoping for a festive first official meeting with US President Joe Biden, but the suicide attacks at Kabul airport changed all that. 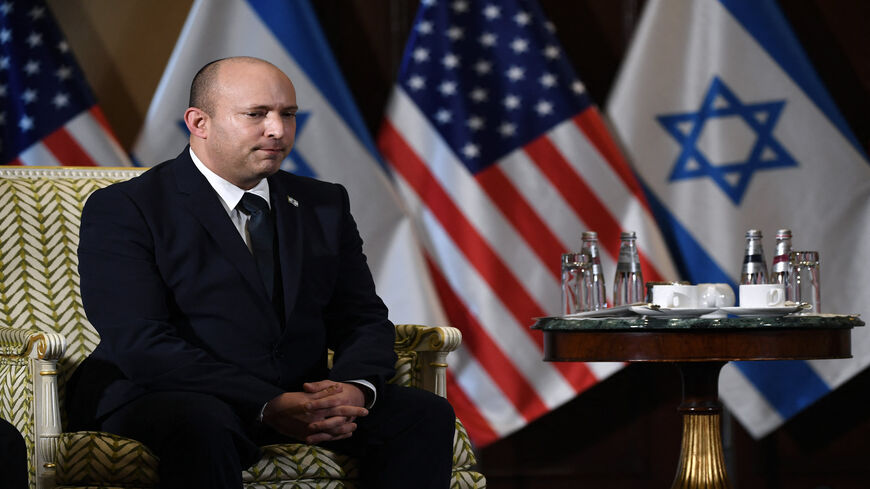 Shortly before the start of his first meeting with US President Joe Biden Aug. 26, Israeli Prime Minister Naftali Bennett posted a photo captioned “final preparations,” showing him sitting at the head of a table surrounded by advisers. The photo was shot at Washington’s Willard Hotel, where Bennett and his entourage were getting ready to set out for the White House nearby.

In Israel it was prime time, with all the major networks ready in their studios, hosting top diplomatic and security analysts, waiting for their correspondents on the ground to report on the start of the meeting. The Biden-Bennett summit, as it was being dubbed, was getting high-profile coverage, highlighting the fact that for the first time in 12 years, the name of the president’s Oval Office guest would not be Benjamin Netanyahu.

Bennett came intent on demonstrating a spirit of change, stressing the difference between himself and his predecessor as part of a calculated strategy that dictated every detail of the state visit. He flew to Washington without his wife and children, unlike Netanyahu’s ostentatious foreign trips with his wife Sara always at his side and sometimes one or both of his sons.

Upon boarding the plane in Israel, Bennett declared, “I am heading to Washington to meet with President Joe Biden, an old friend, a true friend of the State of Israel.” He then laid out his plans to meet with top Biden administration officials on Aug. 25, including the secretaries of state and defense. “There’s a new administration in Washington, a new government in Israel, and I bring from Jerusalem a new spirit of cooperation,” Bennett added.

When referring to the diplomatic challenges of his visit, the prime minister said, “We will discuss many fronts, first and foremost the Iranian front. We will talk especially about blocking Iran’s nuclear program. We will deal with several matters to fortify Israel’s military edge, and at the same time discuss economic issues, high-tech, innovation, the climate crisis that troubles us all and, of course, the fight against the coronavirus.”

Bennett has been striving for a meeting with Biden since taking office in mid-June, but Biden was busy with more pressing issues, among them the withdrawal from Afghanistan. This has now gone badly wrong and is causing him severe domestic headaches. Eventually, despite the less than perfect timing, Biden made time in his hectic schedule for his first meeting with the prime minister of Israel, signaling that he wants Bennett to succeed and would do everything to help him, a sentiment reflected in briefings of Israeli journalists by the White House.

Bennett, for his part, had good reason to be pleased. Despite his domestic troubles, among them rising tensions along the borders with the Gaza Strip and Lebanon and the growing coronavirus morbidity, he was intent on making it to the Oval Office prior to the Jewish New Year, Rosh Hashanah, which falls on Sept. 6. The photo op would serve as a victory photo of sorts, a seal of approval attesting to his membership in the elite club of leaders of the free world.

From the moment the meeting was set about a week ago, Bennett’s preparations went into high gear. In many ways this was to be his induction as prime minister, who came to power under extremely unusual circumstances, with only six seats for his Yamina party in the 120-member Knesset. At the same time, he was readying to host German Chancellor Angela Merkel upon his return from Washington on Aug. 29. It was to be a farewell visit of a very important friend of Israel, and she was scheduled to be a guest of honor at the weekly government meeting.

However, the best laid plans went out the window with the deadly suicide bombing at Kabul airport, which took the lives of dozens of Afghans and American soldiers. In fact, shortly before the attack, Merkel called Bennett, telling him she was canceling her visit because of the Afghanistan crisis.

When the attack took place, Bennett was still at his hotel waiting to leave for the White House. The Israeli reporters accompanying him were on standby at the designated press areas, but they had nothing to report. The live reporting from Washington on the Israeli networks turned into meaningless babble to fill the air time. The horrifying photos from Kabul said all that needed to be said. Biden was managing the crisis from the White House Situation Room, and his attention was wholly focused on dealing with the catastrophe and its fallout.

As the minutes ticked by, the delay of the meeting with Bennett turned into embarrassment, until word came from the White House that the summit would be delayed, stripping what little was left of the festive atmosphere in the Israeli delegation. In the late evening hours, Israel time, Bennett’s office reported on his phone conversation with Biden. A statement by the White House said Biden thanked Bennett for demonstrating understanding of the changed timetable for their meeting in light of the events in Afghanistan, and added that he was looking forward to his meeting with Bennett the following day.

This was not how Bennett had envisaged his meeting with Biden. Everything that could go wrong went wrong, and more. His political rivals back home rubbed their hands in glee and accused Bennett of making a mistake by pressuring Biden to agree to a meeting at such inopportune timing. Journalists identified with Netanyahu had been writing in the lead-up to the visit advising Bennett to avoid a White House visit at this time. Following the Kabul blasts, they went full steam into “I told you so” mode.

For example, Boaz Bismuth, editor of the Israel Hayom newspaper closely identified with opposition head Netanyahu — owned by the widow of the late gambling tycoon and strong Donald Trump supporter Sheldon Adelson — wrote an article Aug. 20 headlined, “Not the right time for a White House meeting.” Bismuth argued that the withdrawal from Afghanistan had crushed what remained of US credibility around the world. He said that a Bennett meeting with Biden would be a mistake, because it would bolster the man who handed the Middle East to Iran and the Taliban on a silver platter.

“Prime Minister Naftali Bennett's arrival at the White House this coming Thursday will be Biden's first chance to rebuild his brand,” Bismuth wrote. “The stamp of approval Bennett will provide him by sitting with him in the Oval Office will be the first signal that Biden is trying to look like a president who doesn't abandon his allies, and the administration's first step toward the difficult year the Democratic Party is expected to face — interim elections [for the House and Senate]."

Given the delay in the meeting, Bennett will have to extend his stay in Washington over the Jewish Sabbath during which religious Jews such as himself do not travel. While his meeting with Biden will nonetheless be far better and friendlier than Netanyahu’s meetings with Democratic Presidents Bill Clinton and Barack Obama, its festive climate has been marred. The new timetable, shortly before the start of the Sabbath in Israel, means that many Israelis will switch off their TV sets and will not watch Bennett’s triumph live. On his return, Bennett will have to hit the ground running to deal with a myriad of domestic problems, including the simmering tensions on the Gaza border.