At their White House meeting, Prime Minister Naftali Bennett received from President Joe Biden almost everything he was out to get, including a public declaration on a US commitment against a nuclearized Iran. 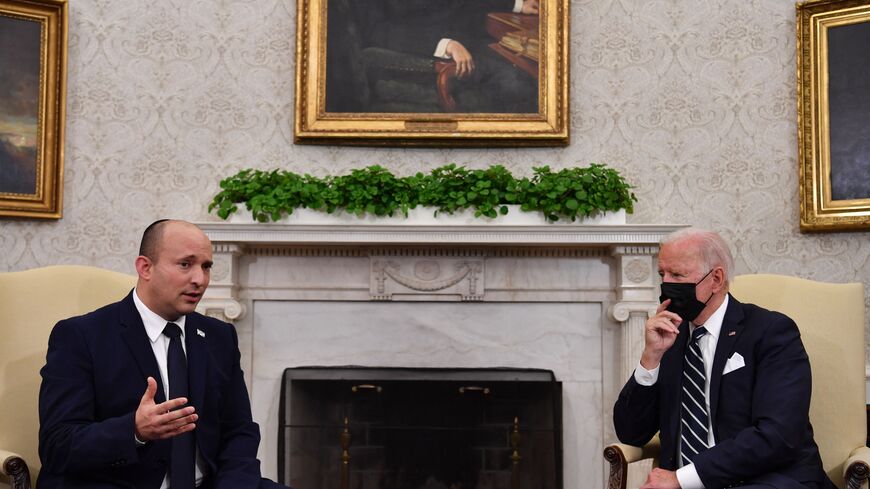 Israeli Prime Minister Naftali Bennett (L) meets with US President Joe Biden in the Oval Office of the White House in Washington, on Aug. 27, 2021. - NICHOLAS KAMM/AFP via Getty Images

It was nerve-wracking, tense, emotional and harrowing, but it finally happened. Israeli Prime Minister Naftali Bennett and US President Joe Biden met at the White House. The two men met first one-on-one for 50 minutes, officially cementing their new relationship, after which their top staff joined them for an expanded session. “We’ve become close friends,” Biden said during the Oval Office photo op with his guest, allowing Bennett’s aides to happily declare mission accomplished on one of their long list of tasks: giving off a sense that the 78-year-old president and 49-year-old prime minister had become buddies.

“This will be the start of a beautiful friendship,” one of the prime minister’s advisers told Al-Monitor, on condition of anonymity, in an upbeat note following the meeting.

Bennett got everything he wanted from Biden in terms of public pledges, first and foremost the president’s declared “commitment to ensure Iran never develops a nuclear weapon.” Bennett’s people breathed sighs of relief and exchanged smiles, and then heard Biden add that while the United States would prioritize diplomacy to block Iran’s nuclear program, “If diplomacy fails, we’re ready to turn to other options.”

When Bennett’s turn came to address reporters, he thanked Biden for his promises and reiterated them to ensure that Tehran was paying attention, too. In simple Hebrew, Biden was saying that “there is now a military option on the table.” What remains is to make sure the remark is translated correctly into Farsi.

But Bennett’s comments also illustrated the disagreement between Israel and the United States. While Biden said the United States would prevent Iran from developing nuclear weapons, Bennett stressed Israel’s commitment to block Iran before it becomes a so-called “nuclear breakout state.” One of Bennett’s aides told Al-Monitor prior to the meeting with Biden, on condition of anonymity,  that while “the US can afford for Iran to be a breakout state, Israel cannot. This is a tactical disagreement, not a strategic one.” Bennett stressed that he and the president had formulated a shared strategy on the Iran issue. At the expanded session with staff following their one-on-one, the two leaders were expected to nail down details of this strategy.

The event did not start out this way. Bennett prepared for his meeting with Biden as he would for the audition of his lifetime. One of the principles established in preparatory discussions, which Bennett repeated to himself over and over, was not to mention or even hint at the debacle in Afghanistan. He and his advisers decided not to raise the issue or allude to it in any way during the talks with the president.

This decision stemmed from Bennett’s desire to create an intimate personal relationship of trust with Biden and to illustrate that Israel is back to being a loyal, discrete and credible ally who takes American interests to heart. “Biden doesn’t need us to remind him of Afghanistan, he is dealing with it around the clock, there’s no reason to rub salt on this painful wound,” one of Bennett’s staff told Al-Monitor on condition of anonymity prior to their takeoff for Washington.

Afghanistan did not wait for Bennett to bring it up. It did so on its own, big time. The Aug. 26 suicide bombing in Kabul overshadowed the meeting for which Bennett had been preparing for two whole months and which led to its 24-hour delay. Bennett had intended to head back to Israel after his scheduled Thursday appointment with Biden to make it home in time for the Jewish Sabbath. But once the extent of the Kabul tragedy became clear, Bennett’s people told their American counterparts that they understand the new constraints and that Bennett would be at the president’s disposal for their meeting at a time most convenient for him. That means Bennett and his entourage will spend the Sabbath (Saturday, Aug. 28) in Washington so as not to violate the holy day by traveling.

This concession threw up complications for the Israeli delegation. In order to avoid a weeklong quarantine upon their return to Israel, Bennett and his staff are being isolated from their American hosts except for official meetings. That means they will be isolated at the Willard Hotel near the White House until they fly home the night of Aug. 28. But Bennett would have been willing to go into quarantine for two months if it meant achieving a successful, telegenic and effective summit yielding positive headlines and public and clandestine commitments from the president. This was the goal he set himself during the exhausting preparations for the visit.

When news emerged of the meeting’s 24-hour postponement, supporters of former Prime Minister Benjamin Netanyahu chortled in glee. While Netanyahu was vacationing on a Hawaiian island owned by billionaire businessman Larry Ellison, a witness for the prosecution in Netanyahu’s bribery and corruption trial, Netanyahu’s followers were tweeting and posting comments about Bennett’s karma being a bitch and that the heavens are fighting Bennett to spoil his journey to America.

This crass schadenfreude in the face of a horrific terror attack that killed almost 200 people was not limited to the fringe elements of Netanyahu’s “Bibist” camp. His son Yair Netanyahu also joined the fray on Twitter. These reactions illustrate how the fury of Netanyahu’s political followers at his ouster overshadow the humanity of some Israelis, especially those who feel the sun will never shine as long as Netanyahu is kept away from the seat of power he held for the past 12 years. Bennett’s mission is to prove them wrong, to show that the earth continues to revolve around its axis and that some aspects of life in Israel have even improved since Netanyahu left in June.

The meeting with Biden was supposed to help Bennett achieve this goal. Right now, following the one-on-one with Biden and the photo ops, attaining this mission appears feasible. On the Afghan issue, which both leaders raised in their public remarks, Bennett reassured Biden that Israel never had and never would ask the United States to send troops to defend it. “That’s our job. We will never outsource our security,” he said. “It’s our responsibility to take care of our fate.” Bennett also shared with his host Israel’s experience in combating the coronavirus and reported on the significant success of the vaccine booster in blocking morbidity. Biden said the United States, too, would soon begin inoculating its citizens with a third shot.