Ahead of meeting Biden, Israel’s Bennett meets with Austin, Blinken 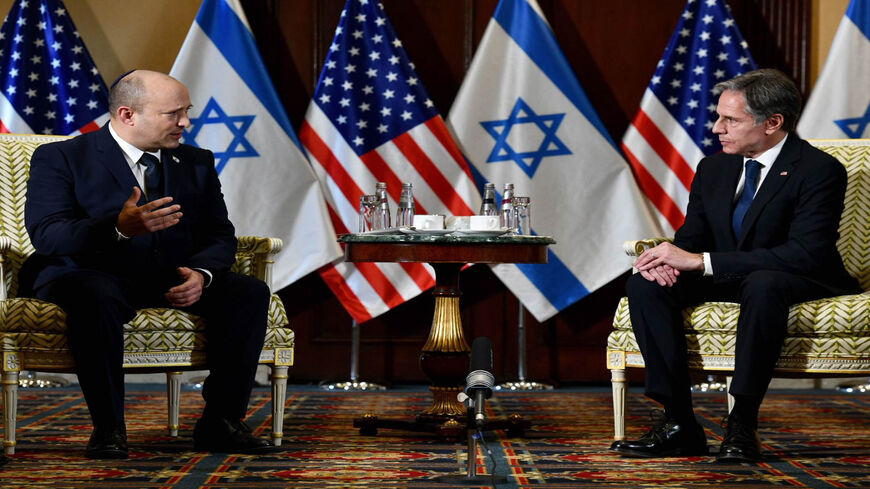 Israeli Prime Minister Naftali Bennett met Aug. 25 in Washington with Secretary of Defense Lloyd Austin, Secretary of State Antony Blinken and national security adviser Jake Sullivan. Bennett arrived to the United States yesterday for his first official visit there as Israel’s premier. He is expected to meet today around noon local time with President Joe Biden at the White House.

After his meeting with Austin at the Pentagon, Bennett tweeted, “We discussed a number of regional, political and security issues, chief among them ways to curbing Iran’s regional aggression and the progress of the Iranian nuclear program. I thanked him [Austin] for the close cooperation between Israel and the United States in the security field, and I emphasized that Israel would continue to assert its right to maintain its security superiority in the Middle East, and would do whatever was required in that regard.’’

The US Defense Department said Aug. 25, “The leaders discussed the wide range of threats posed by Iran’s nuclear program, support of terrorism and maritime aggression. They agreed to cooperate on air and missile defense and countering unmanned aerial systems. Secretary Austin affirmed the United States’ commitment to Israel’s security and Qualitative Military Edge. The Secretary stressed the United States’ commitment to broader stability in the Middle East region, including through its military relationships with longstanding partners.’’

Ahead of his meeting with Blinken, Bennett said he intended to talk with his interlocutor “about a range of issues, including how we are curbing Iranian attempts to take over the region and its race for nuclear weapon. We will talk about regional stability, and about climate change, which is an issue that concerns us all.’’ Referring to the make-up of his coalition, Bennett stressed he was bringing from Israel a new spirit, of people who are holding at times different opinions, but are committed to working together constructively and with good will. Associates of Bennett had repeated this message of a new Israeli political spirit, compared with the former Netanyahu government.

State Department spokesman Ned Price said that Blinken and Bennett “agreed on the importance of working toward Israel’s inclusion in the Visa Waiver Program in order to benefit both US citizens and Israeli citizens.” An unnamed source in Bennett’s entourage in Washington was quoted in Israeli press as saying, “This is a gesture of the US government to the Israeli people. The prime minister brought it up because it is important to him. It is a problem that needs to be solved.”

Speaking at the weekly Cabinet meeting Aug. 22, Bennett told his ministers that he will work to convince Biden to abandon his plan to reenter the Iran nuclear deal. Bennett was quoted as saying that in his upcoming meeting with Biden, he will present “an orderly plan that we have formulated in the past two months to curb the Iranians, both in the nuclear sphere and vis-a-vis regional aggression,” adding that "now is the time to halt the Iranians, to stop this thing" and not to reenter the deal that “has already expired and is no longer relevant, even by the standards of those who once thought that it was.” Still, Israeli journalists have noted Bennett plans to tell Biden that, unlike former Prime Minister Benjamin Netanyahu, he wants to cooperate with the US administration on the Iranian issue.