Israel welcomes US Secretary of Defense Lloyd Austin on a first official visit to Israel, though it is not at all sure whether the visit would calm down Israeli concerns over a US deal with Iran. 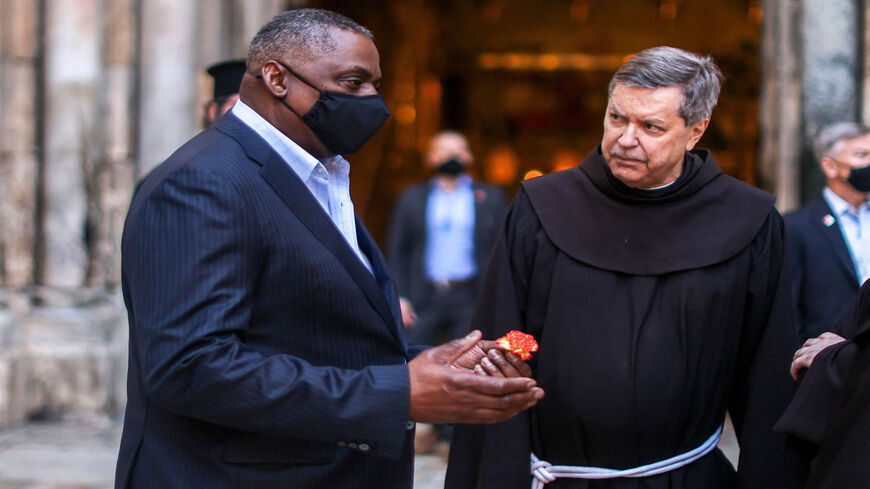 US Defense Secretary Lloyd Austin (L) speaks with Franciscan monks outside the Church of the Holy Sepulchre, traditionally believed to be the burial site of Jesus Christ, in Jerusalem's Old City, April 11, 2021. - Ahmad Gharabli/AFP via Getty Images

Israeli media raised concerns on April 11 over US Secretary of Defense Lloyd Austin avoiding to mention Iran in his joint press conference in Tel Aviv with Defense Minister Benny Gantz. Addressing journalists, Austin conveyed the administration's strong commitment to Israel, stating that "during our meeting, I reaffirmed to Minister Gantz our commitment to Israel is enduring, and it is ironclad. And I pledge to continue close consultations in order to ensure Israel's qualitative military edge and to strengthen Israel's security."

In contrast, Gantz addressed specifically the Iranian threat, stating that Israel "regards the United States as a full partner across all operational threats, not the least, Iran." Gantz then added, "We will work closely with our American allies to ensure that any new agreement with Iran will secure the vital interests of the world, of the United States; prevent dangerous unrest in our region; and protect the State of Israel."

Ahead of the visit, unnamed Israeli officials had said Austin’s meetings will focus on Iran and on other regional issues, as well as ensuring the Biden administration will honor understandings reached earlier with the Trump administration on preserving Israel’s qualitative military edge in the region. Israeli sources have also expressed concern over Washington’s determination to renew the nuclear deal with Iran.

Austin's visit comes amid growing tensions between Israel and Iran. An April 6 report by The New York Times claimed Israel was behind the attack on the Iranian vessel Saviz, apparently used for surveillance purposes. Israel had blamed Iran for sabotaging two Israeli-owned ships in recent weeks, though Iran did not take responsibility for any of the attacks. Israel, for its part, did not take responsibility for the attack on the Saviz, with Gantz simply stating, “The State of Israel must defend itself. Every place we find an operational challenge or operational need, we will continue to act. We are preparing ourselves at this time on numerous fronts: at our southern and northern borders, as well as vis-a-vis the threats that Iran is presenting, whether directly or indirectly via its proxies in the Middle East.”

On April 11, tensions further escalated, with reports blaming the Mossad for a cyberattack on the Iranian Natanz nuclear facility. Israeli media contradicted earlier reports from Tehran, about an accident or an electricity malfunction occurring at the site.

Israeli officials did not address the incident directly. Still, speaking at a ceremony honoring Israel Defense Forces (IDF) fallen soldiers, Chief of Staff Aviv Kochavi said, “The IDF actions throughout the Middle East are not hidden from our enemies’ vision, who are observing us, seeing our capabilities and carefully considering their next steps. By virtue of clever operational activities, the past year was one of the most secure years that the citizens of the State of Israel have known. We will continue to act combining power and discretion, determination and responsibility — all of this in order to guarantee the security of the State of Israel.”