The Iranian nuclear program and its support of regional and global terror were the focus of the meeting in Washington May 19 between Israel’s Defense Minister Benny Gantz and Secretary of Defense Lloyd Austin. 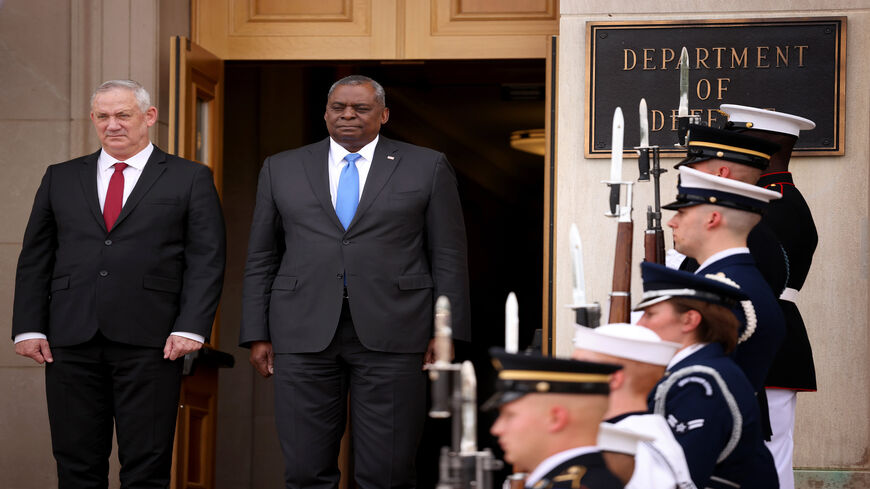 US Secretary of Defense Lloyd Austin (R) and Israeli Minister of Defense Benny Gantz (L) stand at attention during the playing of the Israeli national anthem at an arrival ceremony at the Pentagon, Arlington, Virginia, June 3, 2021. - Win McNamee/Getty Images

On a work visit to the United States, Defense Minister Benny Gantz met May 19 in Washington with Secretary of Defense Lloyd Austin. Gantz's delegation also included Israeli Ambassador to the US Michael Herzog, Director of the Defense Ministry Political-Military Bureau Dror Shalom and the minister’s Military Secretary Yaki Dolf.

After the meeting, Gantz tweeted, "I just met with my friend Secretary of Defense Lloyd Austin for a discussion that built on our ongoing work to deepen the unparalleled defense cooperation between the United States and Israel. We touched on ways to promote dialogue and partnership for a more secure and prosperous Middle East region. I emphasized the importance of acting decisively against Iran’s regional aggression and strengthening our regional coalition under US leadership. I told Secretary Austin that Israel supports Ukraine by providing humanitarian aid and non-offensive equipment, while maintaining a policy in line with operational considerations and ensuring regional stability."

A statement issued by Gantz's office read, “Action should be taken against the Iranian aggression in a number of ways, including strengthening the US-led coalition in the region.” The statement also said Gantz thanked the United States for recently passing a bill enabling the transfer of a $4.2 billion defense aid package for Israel, which should assist the country in preserving its military superiority in the region. Gantz thanked Austin for “his personal commitment to fortifying Israel’s security.”

Reportedly, the two ministers discussed a series of regional issues.

The focus was naturally on the Iranian nuclear and Iranian regional-influence threats. The ministers talked about the need to strengthen the alliance between Israel and the United States in the region, under the American leadership, and to expand the regional coalition to more countries.

A second issue discussed was the Russian invasion of Ukraine. As a reminder, in a shift of policy, Israel announced May 18 it had shipped to Kyiv 2,000 helmets and 500 vests, to be handed over to the Ukrainian rescue forces and civilian organizations in the country. Since the invasion at the end of February, Israel had insisted to transfer to Kyiv only humanitarian assistance, and was the first country to establish a field hospital there. Still, Ukraine kept and keeps asking Israel for offensive weapons, especially drones.

According to unnamed officials quoted after the May 19 meeting, Gantz repeated Israel's commitment to provide humanitarian assistance to Ukraine, as well as defensive equipment, while preserving Jerusalem's security interests, i.e., preserving its dialogue with Russia over Syria. Reports in the Israeli media in the past three months argued that Israel needs to preserve its ability to allegedly operate against military targets in Syria, where Russia is heavily present. The two men also discussed the mediation moves between the sides and with other involved parties, taken by Prime Minister Naftali Bennett.

Another issue discussed was Israeli security challenges and the wave of terror that broke out in the past few weeks in Israel and the West Bank, which has claimed the lives of 20 Israeli nationals since mid-March. The readout published by the Defense Department said, “Both parties agreed on the need to address the recent increase in terror attacks in Israel. Secretary Austin also underscored the importance of de-escalating tensions and protecting civilians in Jerusalem and the West Bank. Secretary Austin reiterated the Administration’s support for a two-state solution that provides dignity and security for Israelis and Palestinians alike.”

Austin and Gantz also spoke about the killing in West Bank Jenin of Al Jazeera journalist Shireen Abu Akleh May 11. Pentagon spokesperson John Kirby said in a briefing after the meeting, “The government of Israel — it’s not for the Israeli military — I believe it’s in their Ministry of Interior, and they have stated a clear intent to investigate and the secretary [Austin] welcomed that investigation. And obviously, we look forward to seeing what the investigation finds out.” Reports in Israeli media said Austin expressed in the meeting concerns over Israeli police conduct during the funeral of Abu Akleh when officers allegedly attacked mourners, causing the pallbearers to nearly drop the coffin.

Shortly after his arrival to Washington, Gantz met with US national security adviser Jake Sullivan. A statement issued by the Defense Ministry said the meeting focused mainly on Iran’s progression in its nuclear program as negotiations stalled in Vienna, alongside Tehran’s “destabilizing regional activities.” The statement said that Gantz “emphasized the need to work closely and prepare for any future scenario,” hailing “Israel’s excellent defense cooperation with the US.”

Saudi Deputy Defense Minister Prince Khalid bin Salman was also in Washington this week, and met with Sullivan, but apparently did not meet with Gantz.

On May 22, Gantz is scheduled to participate at the annual Israel Parade in New York, on Fifth Avenue. The parade was canceled in 2020 and 2021 over the coronavirus. According to its organizers, this year’s theme of “Together Again” is a response to the rise of antisemitism in New York and terrorist attacks in Israel.

In a sign of military cooperation, US Central Command head Gen. Michael Kurilla was in Israel earlier this week for a two-day visit. It was his first official visit to the country. Reportedly, he became the first foreign general to observe an Israel Defense Forces (IDF) exercise from the highly classified “Fortress of Zion” subterranean command bunker. Kurilla also observed the large-scale Chariots of Fire IDF military drill, which included an additional smaller joint US-Israel drill. As Israel prepares military options on Iran, Chariots of Fire simulated a strike on targets far from the country’s borders.