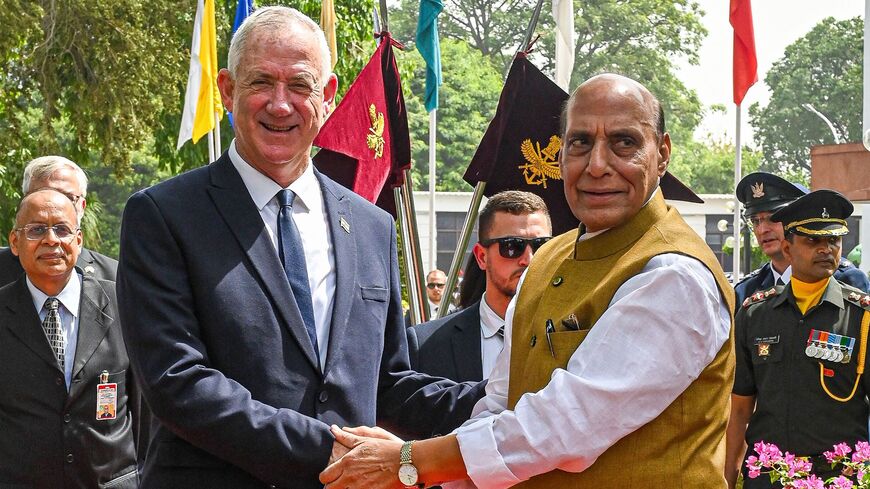 Gantz was originally supposed to visit India at the end of March/beginning of April, but just days prior to his planned departure, his office discovered that Prime Minister Naftali Bennett was scheduled to visit India very shortly before him. Gantz’s office announced plans to move up his Delhi visit to precede Bennett’s by four days.

Ultimately, neither one of them ended up going then. Bennett succumbed to COVID-19 and a wave of deadly terror attacks in Israeli urban centers kept Gantz at home to deal with the fallout. Bennett’s visit has been postponed indefinitely.

Gantz's trip was rescheduled for June 1, but hours before his departure, the opposition made it clear no one would offset him by abstaining from a crucial Knesset vote, forcing him to stay in Israel one more day.

In their meeting, Singh and Gantz discussed international strategic issues as well as enhancing military cooperation including joint drills and defense industry projects. A statement by the Indian Defense Ministry said the two sides signed a "vision statement" on defense cooperation with the “intention to further strengthen the existing framework of the Indo-Israeli defense cooperation architecture.”

“During the meetings, the ministers agreed on their intention to develop the security ties between the countries — the security cooperation, which combines Israel’s technological capabilities and operational experience together with India’s production and knowledge capabilities,” read a statement released by Israel’s Defense Ministry.

Gantz’s visit reflects the close and deepening ties between the sides, especially since Modi took office in 2014 and became the first Indian premier to visit Israel in 2017 to discuss wide-ranging economic and security cooperation.

Modi's trip to Israel was marked by his friendly relationship with Prime Minister Benjamin Netanyahu, who then visited India in 2018. When Naftali Bennett took office in 2021, he made it clear he intends to follow the same path and bring ties with India to an even higher level. Thus, in October 2021, The India-Israel joint working group on defense cooperation set up a task force to create a 10-year road map on areas of collaboration.

India is one of the Israeli defense industry's biggest clients, buying over $1 billion worth of arms annually and highly interested in advanced technologies for its navy and air force.

In one of the major deals between the sides in recent years, Israel and India jointly developed the Barak 8 system, which can intercept aircraft, low-flying anti-ship and cruise missiles and stealth targets.

During the COVID-19 pandemic, Israel and India conducted a series of joint experiments on diagnostics. Both countries intend to continue their scientific and medical cooperation beyond the pandemic.