Populist cleric Muqtada al-Sadr has withdrawn from Iraq's October elections, removing his support for the government. 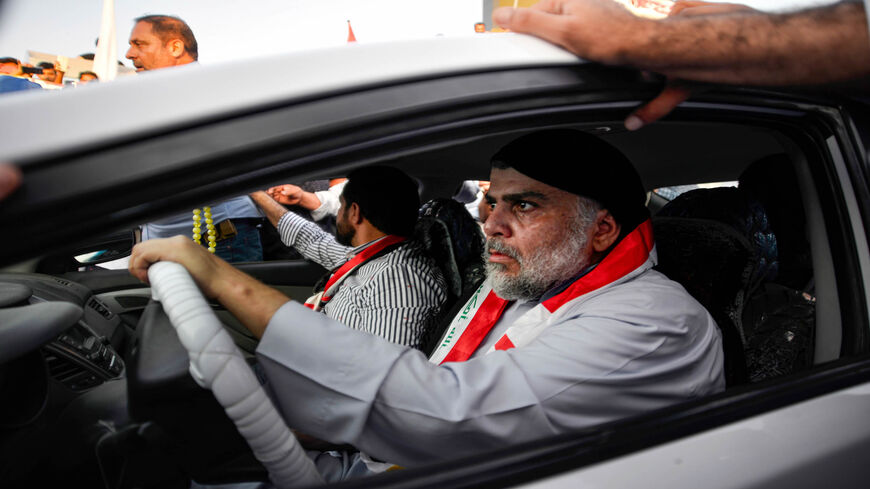 The head of Iraq's Sadrist movement, populist cleric Muqtada al-Sadr, announced July 15 that he will not participate in the early elections scheduled for Oct. 10.

Soon after, hundreds of Sadrists gathered in various cities in southern Iraq and burned their electoral cards in a symbolic protest showing that they also will not participate in the elections.

In addition, Sadr said he has withdrawn his support from all politicians — even those affiliated with his movement — in this government and the one that will be formed after the elections.

Three points we need to keep in mind regarding Sadr's announcement.

First, Sadr is not out of the political equation. This would require the withdrawal of the Sadrist political bloc — the Sairoun Alliance — from the parliament, where it holds 52 seats, more than any other party, and also the resignation of the affiliated ministers and officials.

Second, although Sadr will not participate in the Oct. 10 elections, his political bloc would remain in the Iraqi government as an independent bloc. This will not be possible until the Sairoun Alliance withdraws officially from the elections; the electoral commission announced July 17 that it has not received a withdrawal request from Sairoun.

Third, Sadr is only playing a political game to mobilize the Iraqi public, especially the Shiites, for the Sairoun Alliance and avoid great public frustration with him and his political bloc, which could otherwise reduce his political support.

Sadr has been under great pressure recently due to the failure of his affiliated ministries and public institutions in providing services to Iraqis.

The Ministry of Electricity and Ministry of Health in addition to the central bank are affiliated with Sadr.

Over the last few weeks, in the hottest weeks of summer, the southern provinces have witnessed up to 90% of electricity shortages.

Imam Hussein Hospital in Nasiriyah was destroyed by fire due to a lack of safety measures, which resulted in about 100 deaths. Ibn al-Khatib Hospital in Baghdad also witnessed a similar incident about two months ago, resulting in more than 100 casualties.

The economic consequences of reducing the value of the Iraqi dinar also angered the public. Although this decision was important in light of the economic reform, it has a significant impact on Iraqis due to the prices of food and other goods increasing by up to 50%.

Moreover, the role of Sadr and his militia in suppressing the protesters played a significant role in the rise of public anger against him.

In 2014, Sadr withdrew from politics closing all his offices and saying he would not take part in the elections. However, he changed his mind shortly after and participated in the elections after all.

A source close to the Political Committee of the Sadr movement told Al-Monitor that the committee had advised Sadr that they would not win more than 30 seats in the upcoming elections, based on their surveys and predictions.

Sadr’s Sairoun Alliance is the largest in the parliament with 52 seats. This has given them the upper hand in Iraqi politics and assisted in spreading influence in different Iraqi government institutions and public sectors.

Sadr's withdrawal will reduce the number of voters significantly and raise great challenges against the elections.

Following Sadr's withdrawal, leaders including the prime minister, parliament speaker and head of the Hikma bloc Ammar al-Hakim asked Sadr to take part in the elections.

There is a chance the elections could be postponed if Sadr does not participate, due to the small number of participants and the consequences of Sadrists boycotting the elections, not to mention lack of security and boycotting of many political movements affiliated with the protesters.

Under these circumstances, withdrawal from the elections could be less risky than participating in the elections and losing political influence. The latter would maintain Sairoon's status as the largest bloc and its influence in the government. In addition, joining the boycott camp would give Sadr credibility among the opposition and the protesters.

Sadr could then choreograph his return at a time that he finds appropriate — with more credibility and power.