Muqtada al-Sadr reverses decision to stay out of Iraqi elections

After his withdrawal from October elections due to public anger against the ministers of health and electricity — both loyal Sadrist officials — the head of the Sadrist movement, Muqtada al-Sadr, decides to participate in the vote after all. 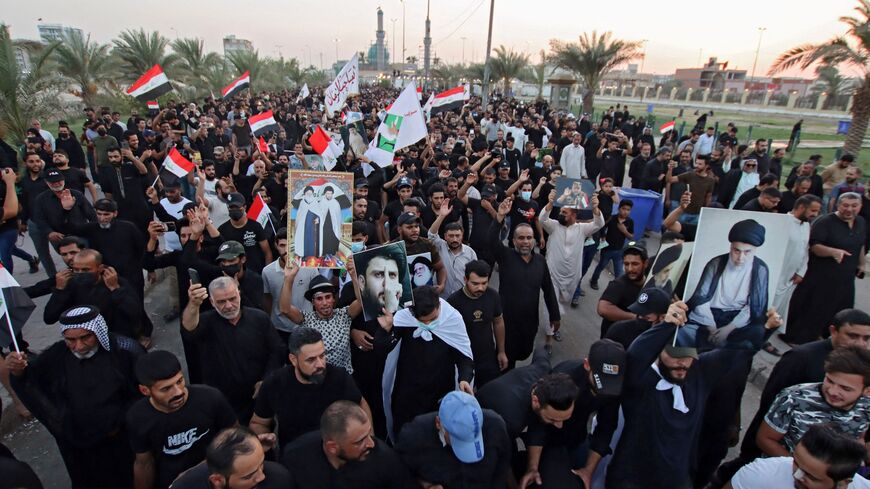 Supporters of Iraqi cleric Muqtada al-Sadr carry placards bearing his likeness in the Shiite holy city of Najaf on Aug. 27, 2021, to show their support with his decision to take part in the October elections. - ALI NAJAFI/AFP via Getty Images

NAJAF, Iraq — Standing in front of dozens of his die-hard supporters, including leaders of his political movement, Shiite cleric Muqtada al-Sadr announced Aug. 27 that his forces will now take part in October parliamentary elections.

“We will run in the elections with a participation of millions,” Sadr said.

On July 15, Sadr withdrew from the elections, joining the protesters and other skeptics of the Oct. 10 vote who saw little value in the elections due to widespread corruption in the Iraqi state. His withdrawal came in conjunction with rising anger against his political movement over its control of the health and electricity ministries, which have come under tremendous fire due to the coronavirus pandemic and power shortages.

Sadr said he had received “a reliable reform document and a doorway to ending corruption.” The document was approved by the National Dialogue Conference held Aug. 25-26 in Baghdad.

The conference was held by Iraqi Prime Minister Mustafa al-Kadhimi and included leaders of the protest movement, political bloc leaders and representatives of various tribes from all over Iraq. The aim of the conference was to discuss Iraq’s ongoing political turmoil and domestic issues, including the conditions of the early election set in large part in response to the demands of protesters who began demonstrating in October 2019.

Kadhimi used the conference as a platform to discourage the boycott of the elections by political candidates and movements such as Sadr's and pushed for greater popular participation in the vote.

“The time for gambling is over. … The election is the criterion for choosing who will face up to this work and gain people’s trust,” Kadhimi said in the final speech of the conference. “Participate in the elections and support it, choose your representatives and stay committed to your people.”

Kadhimi tweeted. that the National Dialogue Conference document "will be sent to the political blocs to be incorporated into a National Charter providing the basis for a healthy electoral environment.”

The document was indeed sent to them and signed afterward by several political leaders, who made commitments to support and implement it. Signatories include Massoud Barzani of the Kurdistan Democratic Party, parliament Speaker Mohammed Halbusi of the Taqaddom party, Ammar al-Hakim of the Hikma movement, former Prime Minister Haider al-Abadi of the Nasr Coalition and Hadi al-Amiri of the Fatah bloc.

In response, Sadr announced that his bloc would participate in the election. He said while standing behind the podium on live television, “We thank al-Kadhimi and the lovers of the homeland.”

Kadhimi welcomed the return of the Sadrist movement to the elections, tweeting, "We thank all the political and popular forces and leaders that have made efforts for Sadr's return."

As election day approaches, political parties have been speeding up their campaigning.

Early this week, former Prime Minister Nouri al-Maliki, the head of the State of Law coalition, traveled to Erbil in an attempt to join forces with the Kurds in an attempt to return to the nation's top post. Before Sadr's withdrawal from the elections, a Sadrist delegation had visited Kurdistan in an effort to form a bigger political coalition to run the government.

Sadr's Sairoon bloc has 52 seats, the largest bloc, in the current parliament.

In her address, the UN envoy to Iraq, Jeanine Hennis-Plasschaert, spoke of the importance of the elections taking place on schedule. She said the vote has “the potential to be different … and boycotting it is not an effective strategy.” She also urged Iraqis to head to the ballot box, saying, “A vote not cast is in fact a gift to those you may be opposed to.”

All this indicates that the upcoming elections will have high participation and be more widely accepted than the 2018 vote, which led to a series of protests and regional conflict.