Though all of Iraq's parliamentary blocs acknowledge a need to amend the electoral law, there is less agreement on what direction changes should take and no plans to make it happen. 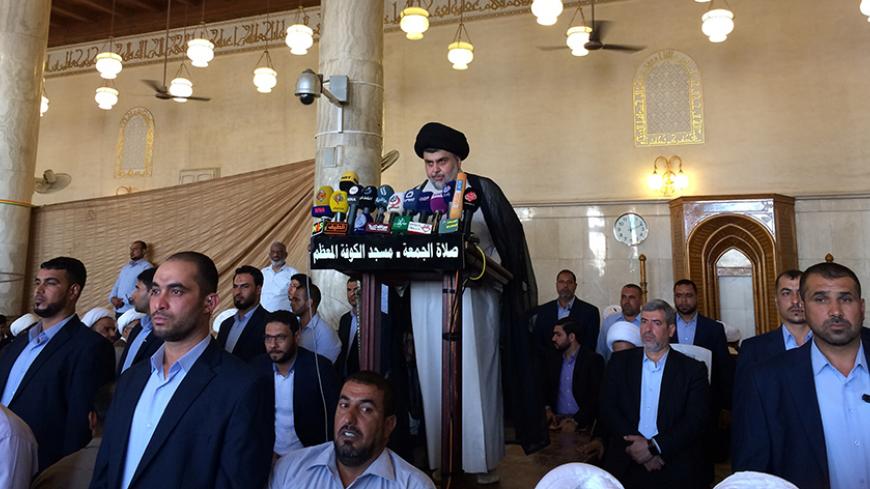 BAGHDAD, Iraq — After demanding a change to the Independent High Electoral Commission, Shiite leader Muqtada al-Sadr insisted on changes to the electoral law itself before his widely popular movement participates in the upcoming elections. The Civil Democratic Alliance is also calling for change, as it believes replacing the current electoral law is an important step toward ending the traditional sectarian blocs.

During the Friday sermon Sept. 23, Sadr described the electoral law as “unjust” and linked changing it to “changing the miserable corrupt figures to have a reformist majority, through which reform can finally improve Iraq’s bitter situation and save the country from occupation, militias, terrorism and corruption.”

No major changes have been made to the electoral law since 2004, when the lists system was established. In 2010, Iraq was split into 18 constituencies, the number of provinces. In 2014 the Saint Lego electoral system was adopted, allowing votes to go to a chosen candidate's list. In this system, if a specific candidate does not win, a vote for him would then be counted for the candidate next in line on his list.

The main disadvantage to the current law is that if the candidates exceed the electoral threshold (the number of votes necessary to win in each constituency), then the surplus votes are distributed among the rest of the candidates from the same list. This is how some candidates made it into the parliament and local councils despite receiving few votes, while others reaped hundreds or thousands of votes but failed to reach the electoral threshold.

Meanwhile, the Sadrist movement has yet to present a new proposal for a electoral law or indicate the changes it wants to see in the current one.

Al-Monitor contacted the spokesperson of the Sadrist movement’s political bureau, Jawad al-Jabouri, who explained, “The Sadrist movement’s leadership has formed a committee of legal experts to study the required amendment to the electoral law and several drafts are now up for discussion.” He added, “But the foundation of a new electoral law would be additional constituencies, direct individual voting or fully open lists.”

Article 49 of the Iraqi Constitution stipulates, “The Council of Representatives shall consist of a number of members, at a ratio of one seat per 100,000 Iraqi persons representing the entire Iraqi people.” According to the Ministry of Planning’s data on the population of Iraq, there must be 351 seats, but the electoral law only provides for 328.

On Sept. 28, Sadr addressed a letter to the head of the Shiite National Alliance — Iraq's largest parliamentary bloc — Ammar al-Hakim, in which he listed 14 conditions for the Sadrist movement-affiliated Ahrar bloc to remain part of the alliance. One of these conditions was changing the electoral law.

The same day, Hakim responded that he agrees on most of the conditions, meaning that changing the electoral law is almost certain, but so far, he has offered no clear vision of what the new law might look like.

Salem al-Musilmawi, a parliament member for the National Alliance, told Al-Monitor, “The National Alliance has agreed to Sadr’s conditions and does not object to amending the electoral law, especially since local elections will be held by the beginning of next year.” He noted, “Amending the law should be done following an agreement between all political parties and the new version should be fair and reflective of the Iraqi people’s aspirations.”

Notably, Sadr's allies from the Civil Democratic Alliance who have declared their support of Sadr’s conditions have a different vision when it comes to the electoral law.

Jassem Hilfi, a Civil Democratic Alliance leader and members of the committee to coordinate the protests in Baghdad, told Al-Monitor that although the Sadrist movement’s political bureau wants to increase the number of constituencies, “The Civil Democratic Alliance wants a law by virtue of which Iraq would be a single constituency with fully open lists, and the law should adopt the largest remained method when it comes to distributing votes to the candidates.” He added, “Multiple constituencies scatter votes and do not guarantee proportional representation.”

Hilfi said, “The Civil Democratic Alliance will discuss with the Sadrist movement the possibility of presenting a joint draft for the new electoral law and work hand-in-hand on passing it, in order to put an end to the current unjust law that was enacted to benefit only the large blocs.”

Mekdad Sharifi, a member of the Independent High Electoral Commission, told Al-Monitor that the commission will need three to four months to prepare for the elections should a new electoral law be approved. “Preparing for any election is bound to a certain timetable. For instance, there is a specific period to update the voter lists, another for logistics and another to train the commission’s members to operate under the new law, and so on,” he explained, pointing out the need “for the parliament to take all of this into consideration if it wants to amend the electoral law.”

Accordingly, any delay in changing the electoral law over differing positions would most likely result in postponing the local elections scheduled for April. Some blocs, such as al-Mowaten, headed by Ammar Hakim and al-Wataniya, headed by Iyad Alawi, have demanded the local elections be merged with the general elections in 2018 to minimize expenses and allow the participation of cities currently occupied by the Islamic State, while Sadr has threatened to boycott the upcoming elections if the electoral law is not changed and the commission is not replaced.