The new election law was beneficial for large political blocs and independents, but it also harmed a number of large blocs whose presence in the new parliament has become almost marginal. 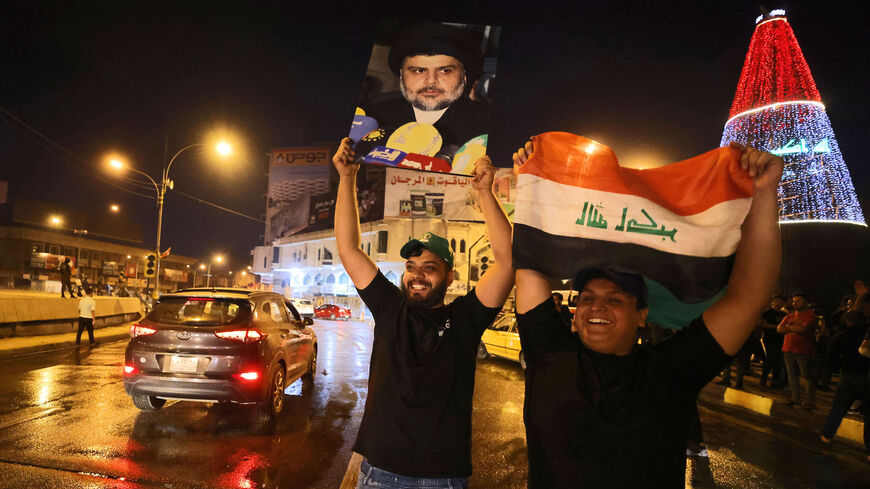 The results of Iraq's recent parliamentary elections came as a surprise to all, winners and losers included, indicating a new political era in the country.

The Shiite Coordination Framework (a group including armed Shiite parties and forces, mostly from the Fatah Alliance) issued a statement Oct. 12 in which it questioned the results of the elections held Oct. 10 and threatened to take action.

Less than an hour later, Abu Ali al-Askari, a security and military official in the Hezbollah Brigades, issued a statement challenging the elections and calling on “the armed resistance factions to prepare for a critical stage.”

The Independent Electoral Commission results were somewhat shocking to political parties, including the Iranian-aligned Fatah Alliance led by Hadi al-Amiri, which won 14 seats after it had 48 seats in the previous session. Meanwhile, the Alliance of National State Forces led by Ammar al-Hakim, who is allied with former Prime Minister Haider al-Abadi, won only five seats, while Hakim alone had 19 seats in the previous session.

The new electoral law led to a great victory for Sadrists in these elections. Preliminary results revealed the Sadr bloc led by leader of the Sadrist movement Muqtada al-Sadr won 73 seats; the Progress coalition led by parliament speaker Mohammed al-Halbusi won 43 seats; and former Prime Minister Nouri al-Maliki regained some power with his State of Law Coalition with 37 seats.

#Iraq election results are yet to be confirmed by @IHECOfficial but a few immediate takeaways in🧵 pic.twitter.com/e1B2rg0TVU

The new law was expected to reduce the influence of conventional political parties. However, some of them were able to benefit from it through social engineering and increase their influence by managing their candidates in the electoral circles.

Sajad Jiyad, a fellow at the Century Foundation, told Al-Monitor, “The current election law is generally positive and better than the previous one, but it needs amendments in the future to prepare the electoral conditions for reform and change. Parties are known for their electoral competition, so some of them used the law to their advantage.”

Jiyad added, “Change is coming, but gradually. Some new faces and somewhat independent parties made it to the top in these elections but without having a serious impact on the political scene. So the new parliament is close to the outgoing parliament in terms of the dominance of large forces.”

Unlike the previous law, which considered each governorate an electoral district, the new election law relies on multiple electoral districts. So it was not useful for parties that did not have fixed popular bases in specific geographical areas.

In Dhi Qar, considered the capital of Iraqi protests for over a year, the law was also beneficial for the Emtidad Movement that emerged about a year ago from within the protests and is led by political activist Alaa al-Rikabi. It managed to obtain 10 seats — five in Dhi Qar and five in three other southern provinces — relying on the voices of protesters who are fed up with the Iraqi political class.

These elections under the new law clearly showed the political organization of the popular bases is the backbone of access to parliament. This also included independents who relied on their communities in their cities to vote for them.

Still, the Sadrist movement was the biggest winner thanks to the new election law. In previous years, Sadr worked to pass an election law in multiple districts. With the October 2019 protests, which he controlled at some point, Sadr had an opportunity to pressure the political blocs to pass the law, which came in accordance with his aspirations and was largely designed to fit his popular base.

Sadr's popular base is large, and his influence is concentrated in well-known areas such as those east of Baghdad and in the districts of southern Iraq. So it was very useful for him to have this law, which enabled him to obtain about a third of the seats in parliament.

“Independents will be in danger among the organized parties later on, and they will thus find it difficult to form strong blocs,” Renad Mansour, fellow at the Carnegie Middle East Center, told Al-Monitor.

The new law gave independents a great opportunity to reach parliament without having to enter into party organizations and follow the convictions of the heads of the blocs. Independents are considered the second largest winners, after Sadr, because of the new law.

However, one cannot say the work of the independent representatives will be influential in parliament, which needs collective and partisan work. Their voices may not be heard amid the noise of large parties such as the Sadrist Movement, the Progress coalition, and other Kurdish, Shiite and Sunni parties, so they have no solution but to either unite or enter into alliances with the parties with which they share some visions.