Large political blocs in the Iraqi parliament voted for a new law organizing provincial elections for 2020 that gives the blocs an advantage over smaller groupings. 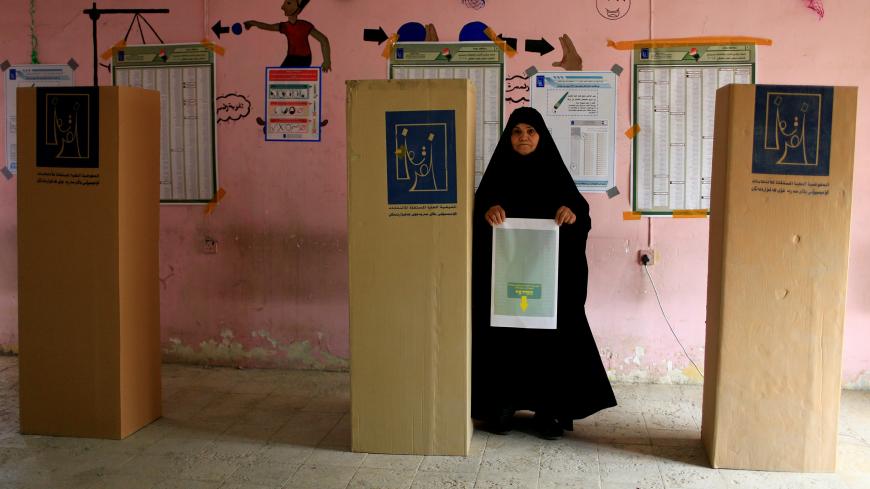 An Iraqi woman arrives to cast her vote at a polling station during the election for the national parliament, Baghdad, May 12, 2018. - REUTERS/Thaier al-Sudani

BAGHDAD — Recent amendments made to the provincial and district council elections law have sparked a wave of criticism in Iraq as the national parliament adopted a change in the Sainte-Lague voting system formula that was rejected by small blocs and parties, as well as by elites, human rights organizations and civil society organizations.

Parliament voted July 22 to amend the provincial elections law and adopt a first electoral divisor of 1.9 under the Sainte-Lague proportional representation seat-allocation system, compared with 1.7 in the 2018 elections for the national parliament. The higher divisor will give large electoral blocs a greater advantage over smaller blocs in terms of winning seats in local parliaments.

The provincial elections are scheduled for April 2020.

The Sainte-Lague system is a mathematical method of allocating parliamentary seats. Votes received by each bloc are divided by a denominator that starts with 1 or above but lower than 2. When votes are divided by a smaller initial number, small lists have better chances of winning seats. The higher the electoral denominator, the fewer the chances for smaller lists and the greater the opportunities for big lists. Under the Sainte-Lague system, vote totals are also divided by succeeding odd numbers — 3, 5, 7 and upward — as necessary to determine seat allocations. For example, if a bloc's vote total divided by 7 was greater than another bloc's vote total divided by 1.9, the first bloc would receive four seats before the other bloc could even receive one seat.

Twenty-eight local organizations working on elections and civil rights expressed their rejection of the new legislation and said in a statement, “It is an unfair amendment that impedes the real representation of voters because it leads to unfair competition between those seeking to participate in the elections. It also limits the ability of small political forces and independent figures to access provincial councils.”

A member of parliament for the Iraqi Communist Party, Jassim al-Hilfi, told Al-Monitor, “The amendment entrenches the authorities’ monopoly and impedes the political change that the people are calling for at the provincial level.”

He said, “Most of the blocs voted in favor of the amendment in order to get rid of certain blocs that don’t stand a chance of making it to the local councils under the amended law.”

Hilfi said most voters will boycott or not participate in the upcoming elections, similar to what happened in the 2018 parliamentary elections.

The Sadrist Party, however, did not concur with the Communist Party, which has been its ally in the Sairoon Alliance since last year's elections.

The Sadrist movement praised the changes. Member of parliament Saadoun Ghanem said, “The new law is a step in the right direction, as it addresses many thorny issues, including elections in disputed Kirkuk, where no elections have been held since 2005.”

This indicates that the blocs controlling the federal parliament and the provincial councils will not back down from setting 1.9 as the first electoral denominator. These blocks seek to avid a repeat of the 2013 provincial elections, when the Sainte-Lague formula with a first divisor of 1.3 gave small parties and independent candidates seats on the councils. New provincial elections were supposed to be held in 2018, but those elections were postponed until next year.

Member of parliament Hussein al-Aqabi told Al-Monitor that large blocs such as Fatah, State of Law and Sairoon voted in favor of the changes and rejected formulas that were suggested by the legal committee to continue using the lower electoral denominator of 1.7 established for the 2018 elections. (There was an attempt to push the denominator up to 1.9 in 2017, but political pressures pushed the number down to 1.7.) This year, the large blocs also rejected the government’s suggestion to give 50% of the provincial legislatures' seats to the candidates with the most votes and calculate how to fill the rest of the seats based on the Sainte-Lague method.

Aqabi, who is a member of the parliamentary legal committee, said, “Due to public pressure and given that the blocs and parties that are not in the government reject the amendment, there will be attempts to amend the paragraph about the distribution of votes before the local elections.”

In addition, the law provides for the organization of elections in Kirkuk, an area disputed between Arabs, Kurds and Turkmens, for the first time since 2005 based on the 2018 voting registries. It stipulates that the national electoral commission shall monitor the elections in 2020.

While there was a prior agreement among voting groups in the province to hold elections, Kurdish representatives said the current situation in Kirkuk is not suitable for holding a vote, saying that the new formula does not serve the Kurds and that it was developed by the Arabs and Turkmens.

Political parties in Kirkuk had agreed last year to organize the Kirkuk elections with the backing of the United Nations Assistance Mission for Iraq. The most prominent term of the agreement called for the largest bloc in the elections to win the post of governor and for other posts to be divided among the three main ethnic groupings.

Arshad al-Salehi, a Turkmen member of parliament, told Al-Monitor, “The elections in Kirkuk are important and can put an end to a lot of controversy over the distribution of powers and positions.”

He said the current form of the law requires “monitoring the voter records based on the civil status card and the ration card to prevent fraud, especially considering that the votes will be counted and sorted electronically.”

Other changes to the law include “the adoption of an electronic mechanism of counting and sorting by resorting to the new electronic system that speeds up the election results and that proved to be successful during the May 2018 legislative elections.”

The new law also says, “Only the displaced who have biometric cards will be allowed to vote, which means that in the next elections, there will be no conditional vote or population movement.”

In addition, the minimum age to be a candidate has been reduced from 30 to 28.

All the changes to the law seem acceptable to the majority of political parties with the exception of the Sainte-Lague method and the objections to the Kirkuk elections.

The use of the new Sainte-Lague formula for determining seat allocation and voters’ beliefs that their participation will not achieve the political change they want are two factors that may prompt many people to boycott the upcoming local elections; this is particularly the case in the center and the south, where protests calling for political and economic reform have been taking place.