Muqtada al-Sadr also said he would withdraw his support for the current government and its replacement. 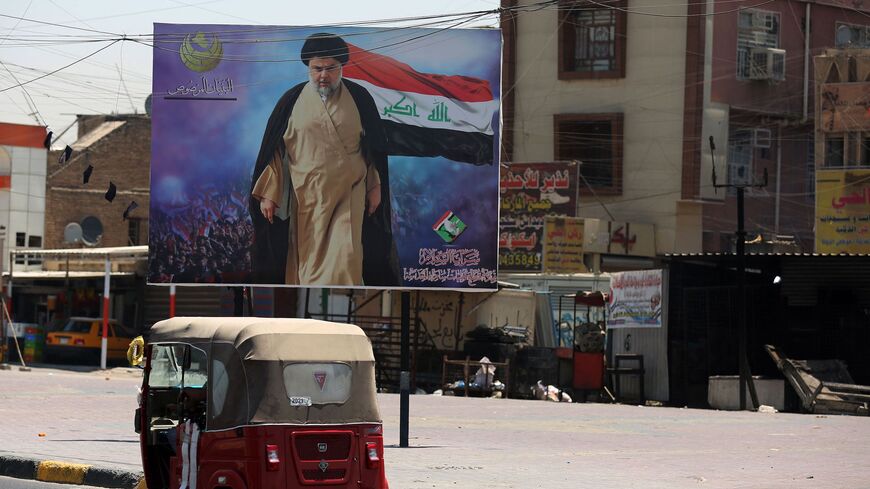 A tuktuk drives past a large poster of Iraq's populist Shiite Muslim cleric Muqtada al-Sadr in Sadr City, east of the capital Baghdad, on July 15, 2021. - AHMAD AL-RUBAYE/AFP via Getty Images

Influential Shiite cleric Muqtada al-Sadr says he will boycott Iraq’s upcoming general election, announcing that he is withdrawing support from the current and future governments.

“In order to preserve what is left of the nation and to save the nation that has been burnt by the corrupt and is still burning, I inform you that I will not be participating in the elections. For the nation is more important than all of that,” Sadr said in a televised speech on Thursday.

“I announce that I am withdrawing my hand from all those who are working with this government, the current and the upcoming, even if they had allegiance to us, the family of Sadr,” he said.

Sadr commands the powerful Sairoon political bloc, which won the most seats in the last parliamentary election in 2018. Sadr himself doesn’t hold a position in the government, but wields significant influence in Iraqi politics. He is a fervent critic of US interference in Iraq.

Iraq last went to the polls in May 2018, the first general election since Baghdad declared victory over the Islamic State. At 44.5%, voter turnout was the lowest since Saddam Hussein was toppled in 2003, especially in Iraq’s Shiite-dominated south.

The early elections called by Prime Minister Mustafa al-Kadhimi were one of the main demands of the anti-government protest movement that swept Iraq in October 2019. Kadhimi’s predecessor, Adel Abdul Mahdi, resigned under pressure from tens of thousands of protesters fed up with the political establishment and Iranian influence in Iraq’s government.

In January, the Iraqi cabinet announced it was postponing the election that was scheduled for June 6. Iraq will now head to the polls on Oct. 10 to select the Council of Representatives’ 328 members, which will then elect the president and prime minister.

In May, the UN Security Council approved the Iraqi government’s request for the United Nations to send a team to monitor the elections and provide logistical support to local and international election observers.