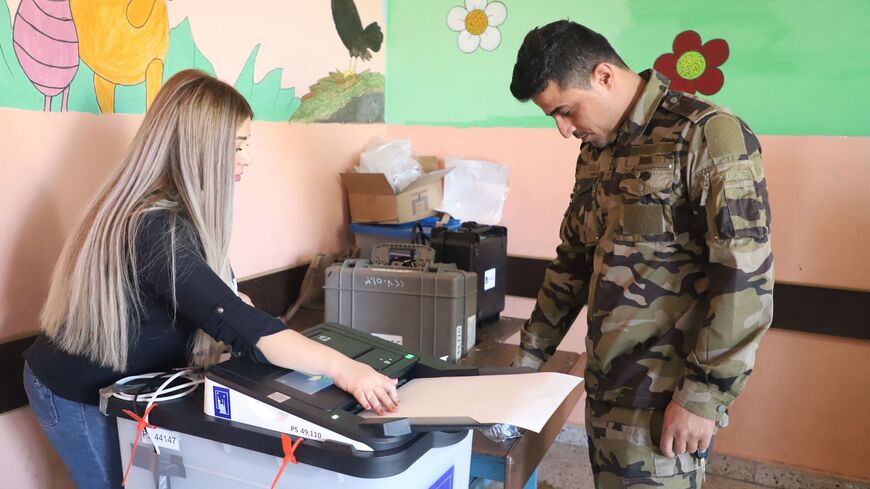 A member of the Kurdish Peshmerga security forces casts his vote early for the parliamentary elections in Iraq's northern city of Sulaimaniyah in the autonomous Kurdish region on Oct. 8, 2021. - SHWAN MOHAMMED/AFP via Getty Images

Early voting is underway for Iraq’s parliamentary elections, with soldiers, prisoners and displaced Iraqis heading to the polls on Friday to vote.

The elections are being held a year early, in keeping with Iraqi Prime Minister Mustafa al-Kadhimi’s campaign pledge. The vote was originally scheduled for June but pushed back until Oct. 10.

Early elections were among the main demands of the protest movement that swept Baghdad and southern Iraq in October 2019. Kadhimi’s predecessor, Adel Abdul Mahdi, resigned under pressure from tens of thousands of protesters fed up with the political establishment and Iranian influence in Iraq’s government.

Voters will select the Council of Representatives’ 328 members, which will then elect the president and prime minister. The general election is the country’s fifth since the US invasion and toppling of Saddam Hussein in 2003.

Election authorities have introduced measures aimed at ensuring fair elections and curbing voter fraud, including the use of biometric voting cards.

Voters will choose candidates across 83 constituencies, rather than 18, under a new electoral law meant to increase the participation of independent candidates. But even with the voting reforms, analysts say the traditional political blocs are expected to prevail.

More than 3,240 candidates from more than 400 parties are running, 950 of them women. One-quarter of the parliamentary seats are set aside for women and nine for minorities.

Voter turnout is expected to be low, despite calls from Iraqi leaders and religious authorities. Late last month, the highest religious authority in Iraq, Ayatollah Ali al-Sistani, urged his followers to participate.

Less than half of eligible Iraqis voted in the last national elections in 2018. Official figures put turnout at 44%, but analysts said the percentage was likely much lower.