Top Shiite cleric Ayatollah Ali al-Sistani called upon Iraqis to participate in the elections in large numbers and vote wisely. 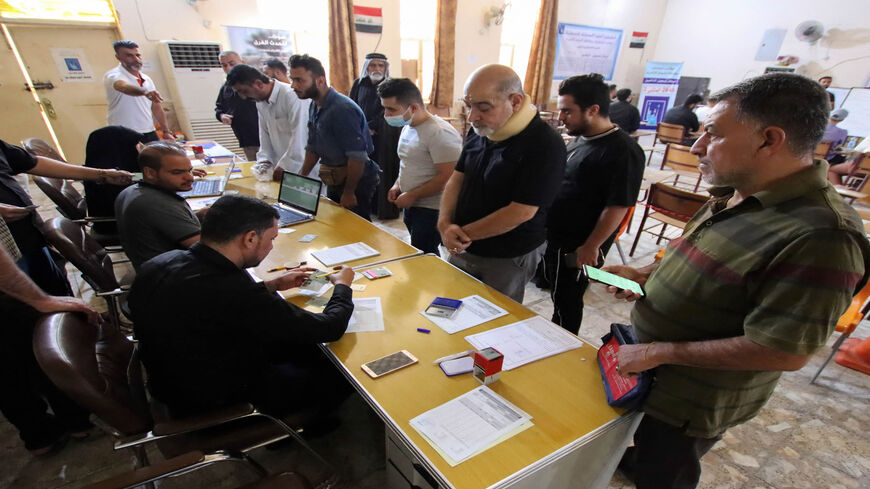 Less than two weeks to the parliamentary elections, the highest religious authority in Iraq, Ayatollah Ali al-Sistani, called Iraqis to vote in the upcoming early elections.

In the Sept. 29 statement, Sistani encouraged Iraqis to participate “consciously and responsibly in the upcoming elections,” calling the elections the safest way to take Iraq to a better future.

In contrast with the previous elections, this is a big development in Sistani's stance toward Iraqi politics.

Prior to the 2018 elections, Sistani had said, “Election is a right for citizens and there is nothing to oblige them to attend. The electoral process does not lead to satisfactory results unless several conditions are met.”

He mentioned four main points in 2018: The electoral law should be just and fair; the electoral competition should focus on economic, educational and service programs, away from sectarianism and political conflicts; external interference in the elections should be prohibited, whether with financial or other support, and the punishment for that should be severe; and voters’ awareness plays an important role in shaping the country’s future.

Moreover, Sistani highlighted the failures that accompanied past electoral experiences in Iraq, calling it the reason for people's disappointment, and showing no hope that there is a possibility for change in the upcoming elections.

The language used and the conditions set in 2018 played a significant role in the low voter turnout. While officials claimed that more than 40% of eligible voters cast their ballots, more accurate figures including sources from the Independent High Electoral Commission (IHEC) back then confirmed voter turnout was just slightly above 20%.

Following the election in 2018, mass protests broke out in Iraq with about 700 casualties and 30,000 wounded as a result.

It is clear that Sistani's language has changed in the run-up to this election, as he has been encouraging citizens to vote and warning them there is no alternative.

Most of the issues mentioned in Sistani’s 2018 statement have been addressed in this election. The electoral law has changed in favor of ordinary voters. The previous election was based on the Sainte-Lague method that gives priority to political parties as opposed to independent candidates. The new law passed last year is prioritizing candidates, and they now compete in small electoral circles with votes allocated directly to them, not to their parties.

The federal court was formed early this year, so it can approve the election results per the constitution. The court was not complete in 2018 and it could not play its constitutional role.

The new electoral commission has put in place measures to avoid fraud. So far, it has dismissed a number of candidates for participating in past election fraud, especially in 2018 when warehouses stocked with votes burned down.

Foreign interference in the 2018 elections was evident as well, which led to a government with a political bias to what is called “the resistance axis.” As a result, Iraq has become a center of regional conflict and a battleground between the United States and Iran.

However, the more balanced policy adopted by the current government following the protests has improved Iraq's relationship with its neighbors and increased Iraq's status internationally.

In the Sept. 29 statement, Sistani stressed the electoral conditions he mentioned in 2018, but this time in a positive way.

“Honorable voters should take lessons from past experiences and be aware of the value of their votes and their important role in shaping the future of the country,” he said, highlighting that only then “they [voters] can take advantage of this important opportunity to bring about a real change in the administration of the state and remove corrupt and incompetent hands from its main joints, which is possible if they join hands and participate in voting effectively.”

In addition, Sistani advised “those in charge of the elections to conduct them in a reassuring atmosphere far from the side effects of money, illegal weapons or external interference, and that they observe their integrity and safeguard the votes of the electorate.”

According to IHEC, more than 17 million Iraqis have registered for this election, out of a total of 25 million voters; 16 million voters have already received their biometric cards.

Prime Minister Mustafa al-Kadhimi asked citizens who have not registered yet to apply for their biometric cards. He encouraged the remaining 8 million eligible voters who have not yet registered to be prepared to vote; they can use their old biometric cards used in previous elections together with fingerprinting at the polling stations on election day.

IHEC canceled overseas voting due to it having been a main source of fraud in previous elections. In addition, military personnel can only cast their ballots at military bases belonging to the Defense Ministry in order to avoid fraudulent activities.

Al-Monitor has been informed by an official from the commission that a new security plan has been developed to oversee the vote counting and protect the votes' storage locations. The new plan has been prepared and will be overseen by a special committee in the prime minister's office under Kadhimi's supervision.

About 3,200 candidates in more than 400 parties will compete in the elections, scheduled for Oct. 10.