The agreement among Iraqi parties comes in light of ongoing efforts by Mustafa al-Kadhimi’s government to reunite political blocs ahead of the October elections. 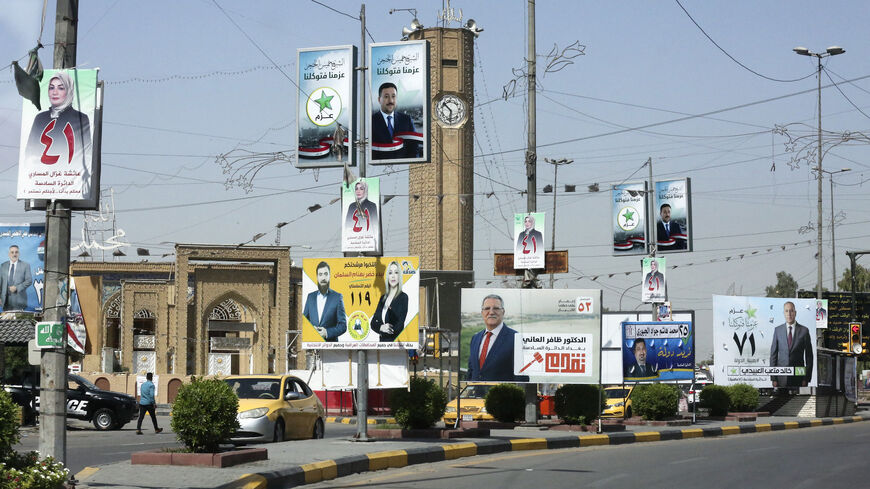 Iraqis go about their day beneath electoral billboards and placards of candidates for the upcoming parliamentary elections, in the district of Adhamiyah in the capital, Baghdad, on Sept. 17, 2021. - SABAH ARAR/AFP via Getty Images

The leaders of Iraqi political parties and blocs participating in the upcoming elections signed on Sept. 15 an electoral conduct document under the auspices of President Barham Salih and Prime Minister Mustafa al-Kadhimi. The code consists of principles and rules aimed at controlling the behavior of political parties during the election period.

Early parliamentary elections are scheduled to be held in Iraq on Oct. 10, with the participation of 110 political parties formed into 22 electoral alliances, and a total of 5,323 candidates. The government has been striving to secure the necessary political, economic and security atmosphere to ensure elections with the greatest possible integrity. It also provided the Independent Electoral Commission with the necessary funds.

In order to providing security and other logistic requirements, the Independent High Electoral Commission conducted on Oct 22, the third and final simulation across Iraq in two stations for each of the 1079 registration centers affiliated to all provincial electoral offices. The prime minister Mustafa Kadhimi has overseen the process. Other political leaders and UN representatives and other international parties attended the event as well.

Kadhimi had sponsored in August the National Dialogue Conference with the participation of all spectrums of Iraqi society to discuss matters related to the Oct. 10 elections.

It is for this purpose that Kadhimi’s government signed the electoral conduct document. According to Salih, who hosted the signing meeting, the document entrenches respect for the constitution and legal regulations, sets up a safe and stable environment for elections, ensures equal opportunities for candidates and aims to ensure abidance by the instructions of the electoral commission. It also aims to ward off negative phenomena that affect the voter's decision, inter alia political money, intimidation of citizens, electoral fraud and others.

The Iraqi president had indicated political forces’ abidance by the electoral code of conduct would "contribute to setting the pace of the electoral process, which will have decisive consequences.” He noted the Iraqi people as well as the international community are observing the elections. Salih hoped the elections would be a democratic model for the peaceful transfer of power.

Kadhimi asserted that the conduct document is an important document worthy of endorsement. “Iraqis have no choice but to hold elections, and we must accept their results in good faith,” he said. “The government will only be biased toward the will of the voters.”

He also stressed the necessity of accepting the results of the elections, pointing to the public service responsibility and the importance of not repeating the mistakes made in the past.

The electoral conduct document provided for the formation of a committee composed of the Supreme Judicial Council and the High Electoral Commission in Iraq to follow up on the implementation of its contents and present it to the public. This will allow detecting any noncompliance with this document by any party or persons and taking the legal measures against them in accordance with the laws in force.

Moreover, the document states that the signatories are obligated to accept the final election results that are approved by the Federal Supreme Court in Iraq. It stressed the need to accept and abide by the final decision of the judiciary. It further urged all political parties’ members and supporters to accept and abide by those decisions and to act in a spirit of responsibility while refraining from organizing electoral campaigns based on racism, sectarianism, nationalism, discrimination on the basis of sex, or disparaging competing persons or candidates.

Although the electoral code of conduct does not include punitive clauses other than those mentioned in the laws governing political parties and elections, it comes at a time when electoral propaganda in the country reached a zenith. Iraqi political parties have been using different methods of political and electoral slander, such as tearing up posters of rival candidates.

In this context, Independent Electoral Commission spokeswoman Nebras Abu Souda told Al-Monitor, “The commission has already received dozens of complaints from different electoral lists. Most of these complaints are related to tearing up and destroying electoral advertisements. Other complaints were about the use of political money in electoral campaigns and making baseless accusations between candidates. The commission hopes that the electoral conduct document signed between the political parties will put an end to such behaviors and allow citizens to head to the polls without legal violations that may affect the election results.”

Abu Souda affirmed that if it is proven by evidence that any candidate has violated the laws related to electoral campaigns and the rules contained in the electoral conduct document, the commission will impose appropriate penalties against this candidate.

Meanwhile, political parties praised the electoral conduct document, a step forward that has eluded the Iraqi parliament until now. The code is not limited to the electoral campaign period only. For instance, the conduct document prevents the use of state resources in favor of any party taking part in the elections. It also prevents the use of weapons before and on polling day and calls for adhering to the constitutional time limits after election day. This is in addition to many other issues that were previously covered by the constitution and some applicable laws. However, during the years that followed the political change in the country in 2003, Iraqi political parties did not adhere much to those rules.

Perhaps one of the most prominent reasons for the parties’ indifference to the laws they approved themselves in Iraqi parliament is the absence of a punitive text in the constitution and the dominance by these parties over state institutions, especially security institutions, which promotes impunity. The constitution does not stipulate a penalty on the winning blocs if they fail to name a prime minister within a period of 15 days as of the date of announcement of the election results, as is required under Article 76. This made it easy to bring the country into a constitutional vacuum.

Moreover, militias have not been banned from participating in the elections. This is contrary to what is permitted by the political parties and entities law, since militias possess weapons and exploit places of worship in political action.

In all cases, the elections’ result will tell whether the violations that marred previous Iraqi elections will be repeated or if the official supervisory authorities will use the electoral conduct document as a means to enforce stalled legislation and address the relevant legal loopholes.