Iraqi authorities succeeded in uncovering plans by cyber hackers to rig the elections, which may end up persuading Iraqi voters to cast their ballots in October. 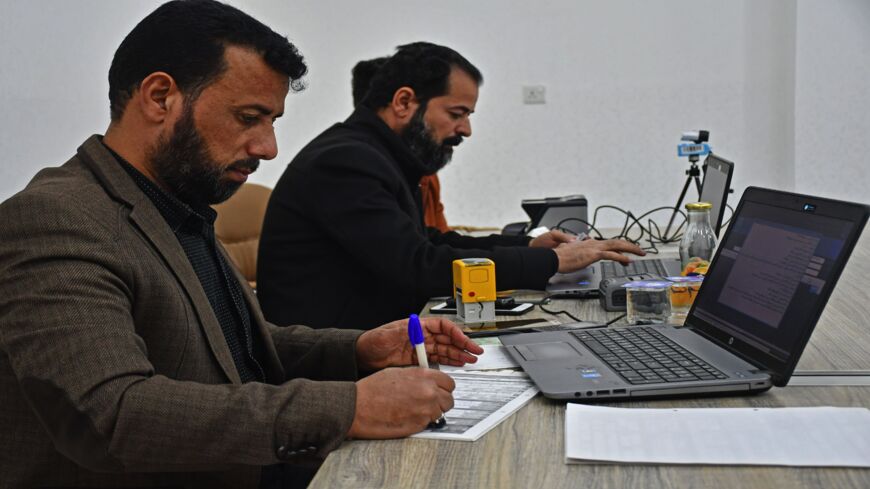 BAGHDAD — Iraqi Prime Minister Mustafa al-Kadhimi revealed on Sept. 1 details of an operation to thwart a major plan by cyber groups associated with political and parliamentary parties to rig the Oct. 10 early elections.

The prime minister’s office said in a statement: “Under the judiciary’s direct supervision, our security services carried out a proactive operation that managed to thwart an attempt to rig the elections by putting pressure on employees in the Electoral Commission, so as to create chaos.”

“Following a thorough cyber investigation by the investigative agencies, under the judiciary’s direct supervision, the security services arrested a number of suspects as part of a group seeking to rig the elections by investing their ties with employees at the Electoral Commission so as to create cyber and political chaos in Iraq. That is through a network of websites, including the Green Lady site, whose administrators used various means to suggest that the site is linked to the prime minister’s office, its employees or advisers,” it added.

The statement further explained, “Unfortunately, some media outlets, specifically those affiliated with some political forces, reiterated these false slanders without verifying the information. The unprofessional and unjust reporting is a flagrant violation of the law and principles of the profession.”

Local media reported in the past few days news on a group accused of seeking to rig the elections and its ties to the Green Lady website, as well as politicians and parliament members, without naming them. Yet they stressed that this group is closely coordinating with these politicians to rig the upcoming elections.

It is worth mentioning that media outlets close to political parties accused Kadhimi of setting up a network to rig the elections at a time when he does not have any electoral list or political party and will not run in the upcoming elections. This being said, Kadhimi has stressed that he is not interested in the results as much as he is keen on holding fair elections on time during his tenure.

According to the Supreme Judicial Council, the investigation “identified a group of professional cyber extorters seeking mainly to prepare for electoral fraud and secondly to create political chaos.”

The Council stated that the group hired “experts in a bid to rig the upcoming legislative elections and cause prejudice to the competing candidates, which is a major crime that would undermine the political system.”

After the election fraud network was revealed, the Supreme Judicial Council formed a working group involving a number of investigative judges. In cooperation with the security agencies affiliated with the executive authority, they monitored the attempts to rig the elections, manipulate the voters’ will and purchase blank ballots, and they arrested some suspects who are currently under investigation.

So far, two out of the three suspects confessed, which supports the evidence extracted from the websites. The investigation continues so as to identify the other suspects who hired experts to rig the elections, which is a crime that would undermine the political system, according to Iraqi judicial authorities.

Previously, the Anti-Corruption Committee, led by Lt. Gen. Ahmed Abu Ragheef, arrested on Aug. 30 Meqdad al-Sharifi, a former member of the Electoral Commission, on charges of election fraud and financial corruption while he was trying to flee the country. Apparently, the committee, which Kadhimi formed once he took office and gave wide powers in the fight against corruption, has added electoral issues to the economic corruption it was already handling. Based on that, political and nonpolitical figures are expected to be arrested in the next weeks on charges related to election fraud and hindering a fair ballot.

Knowingly, electoral fraud and vote-rigging marked the Iraqi elections in the past to the point that the people have been reluctant to vote. The voter turnout in the last elections reached 40%, according to official figures from the Electoral Commission, yet other monitoring bodies maintain that it was less than 20%.

Nearly 5,323 candidates will compete in the elections over 329 seats in parliament, according to the new electoral law, which is the first of its kind since 2003 and involves multiple electoral districts, direct election and digital voting. Political parties fear that militias and outlaws will take control over the voting stations in some areas under their influence, while powerful political parties would be able to tamper with digital ballots.

Kadhimi reiterated on more than one occasion that he will provide the Electoral Commission with the necessary government support to ensure that the elections are held in a safe environment and to involve international monitoring bodies to make sure they are fair and transparent.