Some parties that grew out of the October protests have withdrawn candidates from the upcoming parliamentary elections over security concerns. 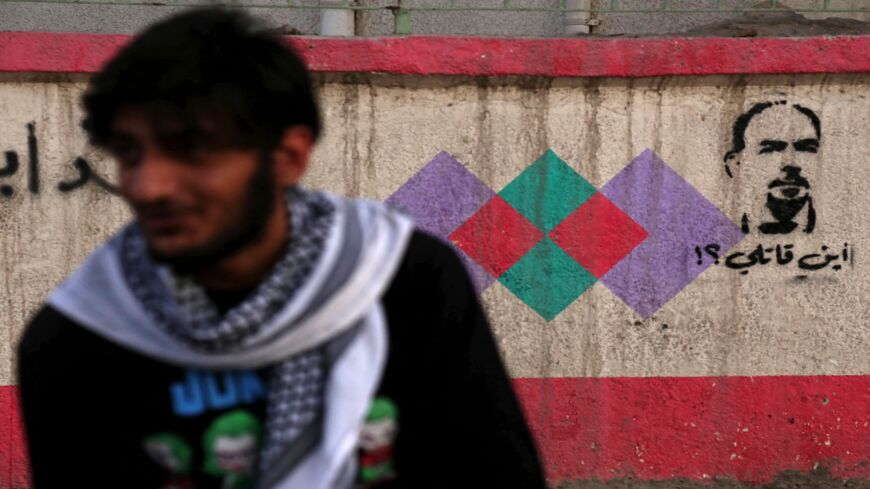 An Iraqi sits across graffiti reading in Arabic "Where's my killer?" and depicting renowned Iraqi anti-government activist Ihab al-Wazni (Ehab al-Ouazni), who was shot dead in an ambush earlier this month, in the shrine city of Karbala on May 23, 2021. A wave of deadly attacks on pro-democracy activists and journalists in Iraq has sparked mounting calls to boycott October parliamentary elections, as perpetrators go unpunished. Killings, attempted murder and abductions have targeted more than 70 activists since a protest movement erupted against government corruption and incompetence in 2019. - MOHAMMED SAWAF/AFP via Getty Images

Activists and youth groups that joined the political sphere in Iraq over the past few months have spoken of the risk of assassination they face because of their decision to run in the parliamentary elections scheduled for October 10 of this year.

The threats and assassinations have prompted them to back out of the elections. This, in turn, has pressured Iraq’s political leadership to acknowledge the presence of armed danger.

On May 20, Iraqi President Barham Salih stressed the need for a safe environment for early parliamentary elections and called for holding the killers of activists and journalists accountable.

Salih's remarks came after nearly 22 parties and grassroots movements withdrew and planned to boycott the elections, Al-Monitor learned. The parties and movements have yet to officially notify the electoral commission of their withdrawal.

Saeed Jassani, an activist from Wasit province south of Baghdad, announced his withdrawal from the elections due to threats he received and also because he was denied access to his area and the right to hang up campaign photos, he said.

Candidates felt an increased threat of assassination following the killing of Ehab al-Wazni, a prominent activist in Karbala province, on May 9. Some political blocs began to sense the danger of assassinations that could target independent or moderate candidates competing against financially and politically influential parties or armed groups in the near future.

On May 9, Iraqi cleric Ammar al-Hakim, head of the Iraqioun parliamentary bloc, called on members of his bloc “to summon security leaders so as to learn what steps they have taken to identify those involved in the kidnapping and assassination of activists and media professionals.”

Following Hakim's call, former Iraqi Prime Minister Haider al-Abadi warned against “declining electoral security indicators,” in a clear reference to the withdrawal of candidates from parties and groups that were formed in the wake of the October protests.

Hussein al-Gharabi, founder of al-Beit al-Watani (National Home) Party, which was born out of the protests, said, “Prior to Wazani’s killing, we indicated that democratic elections should be held based on electoral justice and in a safe electoral atmosphere. We will not give legitimacy to a regime at a time when the government did not identify the killers of activists and protesters.”

Speaking to Al-Monitor, he said Wazani's assassination wass the moment they decided to boycott the entire political regime and not just the elections.

The electoral boycott is not only limited to parties that formed after the protests. Secular parties, such as the Iraqi Communist Party and the People's Party for Reform, and other legislative forces, such as the Iraqi Union for Labor and Rights and the al-Bina bloc, also are boycotting the vote.

Jassem al-Halfi, a top official of the Iraqi Communist Party, said “the assassination of activists and the spread of arms — which the official security services are unable to control — are in and of themselves an indication that there is no safe environment for the elections.”

Iraqi politicians said a number of candidates were threatened with assassination if they did not withdraw from the elections. These are mostly independents who decided to run in the elections either independently or on lists of parties that sprung from the protests.

Speaking to Al-Monitor, Abbas al-Anbori, head of the Rewaq Baghdad Center for Public Policy, did not deny that the parties that grew out of the protests were subjected to assassinations and pressure. However he believes the threat of assassination is not the reason behind the withdrawals.

He said, “The nature of the withdrawals were based on the new parties’ belief that the requirements are too many and that they cannot compete with the large parties that have a lot of money, more experience and popularity. That is why they decided to [withdraw].”

The withdrawal of secular forces — as well groups that grew out of the protests — means protests will be back in full swing in the coming period. These young people did not find hope in the constitutional and democratic mechanism — specifically via the ballot boxes.

These groups and activists will resume activity in the squares to impose themselves on the ground. They believe that none of their demands have been fulfilled. Even when it comes to the demand for holding early elections, the insecure and unstable environment does not allow for fair and just elections, they say.

Meanwhile, the Independent High Electoral Commission of Iraq — the body charged with overseeing the parliamentary vote — has rejected attempts by candidates to withdraw from the polls. In the commission’s view, parties that submitted candidacies are not entitled to withdraw them, in accordance with the electoral law of 2020.

On May 9, liberal parliament member Faig al-Sheakh tweeted, “Following the assassination of martyr Ehab al-Wazani, I withdraw from the parliamentary elections and call on the secular forces and the October revolutionaries to withdraw and get ready for the revolution against Iran and its dirty militias in the coming months. The only option we have is to overthrow the system of criminal killers.”

The al-Beit al-Iraqi (Iraqi Home) bloc took the same step of boycotting the elections after Wazani’s assassination. It also announced it would call on others to boycott as well.

Yet while the withdrawals will affect neither the elections’ legitimacy nor their recognition at the international level, they will widen the gap between the people and the political regime.