An Iran-backed minority alliance has caused delays, and the process of creating a new Iraqi government may take many months. 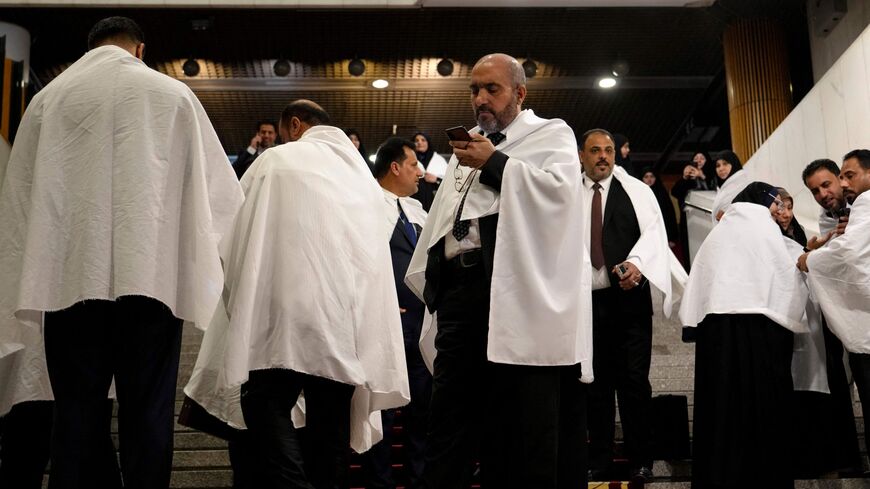 Iraqi members of the Sadrist bloc (of Shiite leader Moqtada Sadr), gather inside the Iraqi parliament in the capital Baghdad, ahead of the country's presidential election, on March 26, 2022. The election was again postponed over a lack of quorum. - AHMAD AL-RUBAYE/AFP via Getty Images

BAGHDAD — Iraq is witnessing a political deadlock following the parliament's third failure to select a president.

The largest parliamentary bloc, Saving the Homeland — which consists of the Shiite Sadrist Movement, the Sunni coalition of Sovereignty and the Kurdistan Democratic party — has failed to collect the two-thirds of parliament members required for selecting the president. On the other side, Iran-backed groups, which consists of the Shiite Coordination Framework, Patriotic Union of Kurdistan and a small number of Sunni members, were able to form a blocking third, making it impossible to select the president without their agreement.

Iraqi President Barham Salih warned on April 9  that “the ongoing political crisis may lead the country toward a dangerous maze in which everyone will lose.”

Prime Minister Mustafa al-Kadhimi said on the same day, “Our people are waiting for an Iraqi reform government, and I believe that we all share the same national mission, which is to stop the obstruction and reach a level of agreement, trust and cooperation.”

Ammar al-Hakeem, head of the National Wisdom Movement, put forward an initiative for dialogue to end “the political blockage.”

The large Iraqi political parties have not yet held a session to elect a new president, although it has been around 100 days since the new parliament's first session.

This is due to the Federal Court’s decision Feb. 3, which ruled that “the session to elect the President must be attended by at least two-thirds of MPs, and that two-thirds of the total number of MPs must vote.”

Based on the court's interpretation, the session to elect the President must be attended by at least 220 MPs out of 329, which was not achieved during two sessions held in March, as the tripartite coalition that includes Muqtada al-Sadr, Massoud Barzani and Mohammed al-Halbousi failed to achieve quorum.

The Coordinating Framework, which objected to the election results, saw this as a victory. The winning blocs did not agree on a candidate for the presidency, but the Iraqi constitution requires that the president assign the candidate of the largest bloc to form a government.

The failure of the two sessions angered Sadr, and he decided on March 31 to stop negotiations on forming a government and called on the Coordinating Framework to negotiate with the other blocs to form a government within 40 days.

Khaled Abdel-Ilah, dean of the Faculty of Political Science at Al-Mustansiriya University in Baghdad, told Al-Monitor, “The constitution did not mention the blocking third that the Federal Court spoke of. Through this interpretation, the court wanted to provide a balance within the political process.”

The Coordinating Framework fears that Sadr will exclude it while taking over the Shiites' share in the government, and it has asked why half the Shiites are excluded from the government formation while all Sunnis and Kurds will participate.

The State of Law Coalition’s Maliki said on April 5, “The tripartite coalition cannot hold a session to elect the President, and neither can the Coordination Framework.” He added, “We must return to the principle of the largest bloc to form a government, which is the prerogative of the Shiite component.”

The interpretation of the Federal Court forces the political blocs to return to political consensus, but this is rejected by Sadr, who is considered the top winner in the October 2021 elections, in which he won 73 seats out of 329 in Parliament.

The Coordination Framework accuses Sadr of trying to take over the Shiites' share in the government formation ministries. Khazali said during an interview with Al-Sharqiya TV on April 9, “Sadr wants to choose the prime minister and wants the 12 ministries that are from the Shiites’ share to be his. I have heard these words directly."

Abbas al-Anbori, head of the Rewaq Baghdad Center for Public Policy, told Al-Monitor, “The invention of the term ‘the blocking third’ is aimed at forcing blocs to reach political consensus.” He added, “The basic idea of the current political system is consensual, and this is what is happening now.”

Some believe that the “blocking third” is an Iranian concept that has been implemented in Lebanon since 2008, ensuring its participation in the formation of Lebanese governments. It is similar to what is happening in Iraq, especially since the “blocking third” blocs are Iran's most important allies in Iraq.

The blocking third can be described as the real guarantor of all the major Iraqi political parties for not being excluded from any government formation, a path that brings them back to consensus in forming governments as happened previously, but it may be with new names, such as a national majority government, or a government of balance or others labels.

Forming a new Iraqi government is expected to take a long time. The government of 2010 took about 10 months, for reasons similar to today, especially the interpretation of the “largest bloc” that presents a candidate for prime minister.