The selection of parliament speaker has been upheld as the federal court rejected the request of the Coordination Framework to cancel the process. 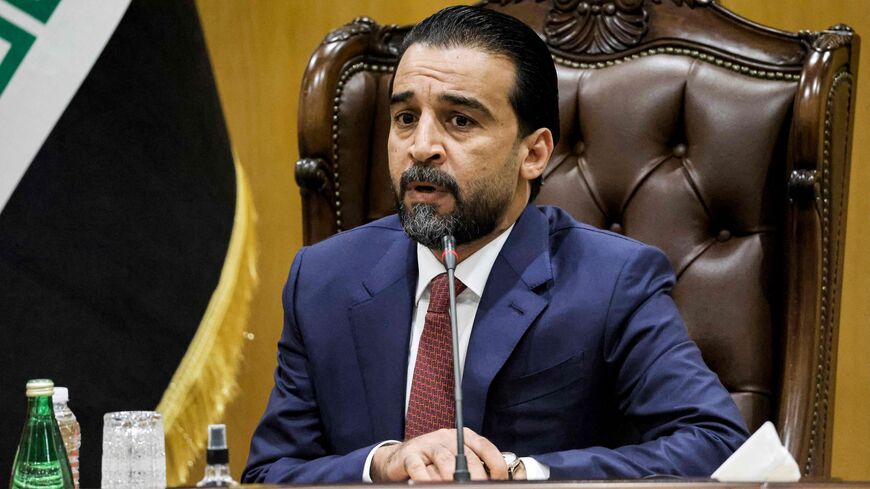 In this photo taken on Aug. 28, 2021, Iraqi Parliament Speaker Muhammad al-Halbousi is pictured at the parliament in Baghdad. - LUDOVIC MARIN/AFP via Getty Images

The Federal Supreme Court of Iraq has rejected a parliamentary faction's request to cancel the selection of the parliament speaker.

The parliament had elected Muhammad al-Halbousi for a second term on Jan. 9. Tensions were running high during the session when former speaker Mahmoud al-Mashhadani, who is affiliated with the Azm Alliance, argued with the Sadrist movement’s deputies, prompting him to adjourn the session.

Khaled al-Dajari took over, and the session ended in the elections of al-Halbousi as speaker of parliament, Hakim al-Zamili (Sader Movement) as first deputy, and Abdallah Shukhan (Kurdistan Democratic Party) as second vice president.

This prompted the Coordination Framework blocs (the State of Law Coalition led by former Prime Minister Nuri al-Maliki, the Fatah coalition led by Hadi al-Amiri, as well as some other Shiite blocs) to object to the session as “unconstitutional.”  A lawsuit was filed by MPs Bassem Khashan and Mahmoud Daoud Yassin. On Jan. 13, the Federal Supreme Court temporarily suspended the work of the Presidency of Parliament.

“Mashhadani was pushed by people wearing shrouds,” he added in a jab to the Sadrist movement’s MPs, who came to the parliament wearing shrouds, sending the message that they have come to fight until death  for their political agendas and alliance.

Moreover, the interim president's role is limited to formal procedures and organizing the election of the speaker. According to Article 55 of the Iraqi constitution, “During its first session, Parliament elects a speaker, first and second deputy to the speaker, by an absolute majority of MPs, by direct secret ballot.”

In other words, the departure of Mashhadani from the first session for health or political reason, or his adjourning the whole session, would not justify the adjournment or cancellation of the session without electing the president.

Halbousi obtained the votes of more than 200 of the 240 MPs who were present in parliament, which came as a result of coordination between the winning blocs in the legislative elections, including the Sadrist Movement (73 seats), the Taqaddum coalition (40 seats), the Kurdistan Democratic Party with more than 30 seats and some independent MPs.

Accordingly, the federal court finally rejected the lawsuit today, meaning that the process of forming the new government will continue without interruption.

It seems that the Coordination Framework knew clearly that their objections would not be accepted, but they tried to delay the formation of the government in order to push the negotiation with Sadrists.

Muqtada al-Sadr, whose bloc won first place in the elections, is insisting on a “national majority” government, refusing to forge alliances with certain parties such as the State of Law and other blocs affiliated with the Coordination Framework that have armed factions.