Iraqi prime minister presses ahead with promise of early elections 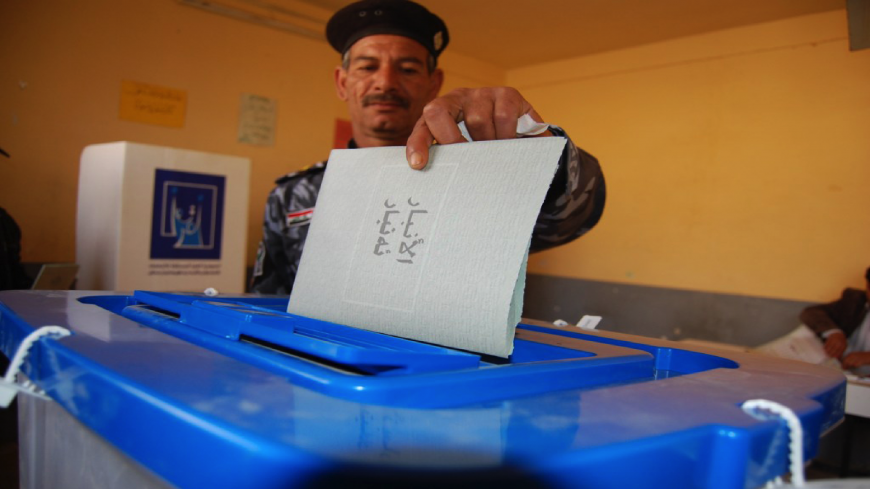 An Iraqi police commando casts his vote at a polling station in the city of Ramadi west of Baghdad on March 4, 2010. - AZHAR SHALLAL/AFP via Getty Images

Iraqi Prime Minister Mustafa al-Kadhimi announced on July 30 that early elections will be held on June 6, 2021. Early elections are a priority for the Kadhimi government, which was formed in the wake of anti-government protests that erupted in Iraq on Oct. 1. The protests killed more than 500 people, according to government estimates.

President Barham Salih praised on Aug. 4, setting time for the early elections, calling upon the parliament to accelerate the process of finalizing the electoral law and the federal court law which is the responsible body for overseeing the elections.

"If the prime minister requests resolving the parliament, I would approve it and send it to the parliament to vote over it," Salih said.

The prime minister's spokesperson, Ahmad Mulla Talal, said on Aug. 2 that a special committee is preparing all requirements for the elections, which will be held on time and in accordance with international standards.

The Independent High Electoral Commission (IHEC) — the institution in charge of elections — has declared its readiness. Yet it requires a full quorum of an incomplete Federal Supreme Court of Iraq, which is the sole body legally authorized to certify election results, among other requirements.

The IHEC also requires preparation of the electoral budget and availability of supplies that it had previously requested from the relevant ministries and which would contribute to holding elections on time.

Hussein al-Hindawi, Kadhimi’s election adviser, told Al-Monitor, “It is a government commitment to set the elections’ date and hold them.”

He added, “There are challenges to the elections, though not compelling, particularly at the security level. There are also financial challenges related to the elections’ cost, ranging between $250 million and $300 million, according to preliminary estimates.”

Hindawi noted that “Kadhimi asked the IHEC to cut costs, rely on some of the nationally [made] supplies and reduce the expenses. We heavily bank on the elections, and we want them to be fair; otherwise, they are deemed unnecessary.”

Several signs indicate that the elections cannot be held on time, such as the controversial election law, existing obstacles relating to the Federal Court overseeing the elections and disagreements over the new IHEC.

Yaseen al-Bakri, a political science professor at al-Nahrain University, said “some political blocs are stalling. They want the current parliamentary term to be completed and avoid going to early elections because they are well aware of the little chances they have in the early elections.”

That is one of the challenges to early elections. The new electoral law passed by the parliament has not been sent to the president for approval, due to differences about it among the protesters and the political parties. Now, the political blocs that approved the new, incomplete election law may even reconsider it, particularly since their vote came in light of the heated street protests that they wanted to cool down in any way.

Nevertheless, Kadhimi has embarrassed the political blocs by putting the ball in their court. Success will be recorded for the Kadhimi administration if they agree with him and move forward with the elections. Yet public anger will be taken out on them if they oppose and obstruct him.

Salah al-Arabawi, independent politician and former office director for Ammar al-Hakim, leader of the National Wisdom Movement, indicated that “there are multiple technical, political and legal challenges that may delay the elections."

He said, “The political challenges lie in the parliament's dissolution. A political consensus is needed in order for parliament to dissolve itself. I do not think that the political blocs will agree that their time in the current parliamentary term be reduced, although some of them are in favor of the date Kadhimi set. Yet they do not want to lose with the early elections being held.”

Arabawi added, “All data indicate that the elections will not be held in June 2021. They may be held in early 2022, and then they will be viewed as early elections.”

Rahman al-Jubouri, senior researcher at the Regional Center of the American University of Iraq at Sulaimaniyah, told Al-Monitor, “The date that Kadhimi set is not official. The parliament and the presidency need to agree as well. The 10-month period of time is not enough, and the elections’ expenses need to be covered.”

“I think that setting a date is designed to prompt parliament and the presidency to take the appropriate measures to choose a clear election law and vote on it in parliament. Many are the problems facing the elections, including the arms and militias and other problems related to the training of the IHEC and its members. All of that cannot be solved in 10 months,” he added.

One can say that Kadhimi was taking a risk when setting a date for early elections at a time when security, technical, legal and even political conditions are less than ideal. However, his intention is to continue to win the street's support, particularly since holding early elections has been its key demand.

Liqaa Maki, senior researcher at Al Jazeera Center for Studies, told Al-Monitor, “There are serious challenges facing Kadhimi. It is not easy to anticipate what will happen. Yet Kadhimi's behavior in general, his ability to govern and understanding of the government mechanism in Iraq affirm that he will not be able to hold early elections.”

Maki added, “If Kadhimi escalates the confrontation with the armed forces, the latter's reaction might be violent and would subsequently result in a state of genuine chaos and total collapse. If he does not, things will remain unchanged. A third option would be that he takes exceptional and unconventional measures to preoccupy his opponents and pave the way for the elections. Yet in order for him to achieve that, he will need international assistance as well as a bit of creativity.”

Kadhimi is probably aware of the many challenges to holding elections in June 2021, but he has decided to put the ball in the court of the political blocs, parliament and the IHEC, who must now initiate the legislation and steps to make it possible. He has shown Iraqis his commitment to the process. The focus will now be on the parliament to implement that promise.