Groups of young people set up political parties as they seek to take part in early elections next year, in an attempt to present themselves as an alternative to the existing parties. 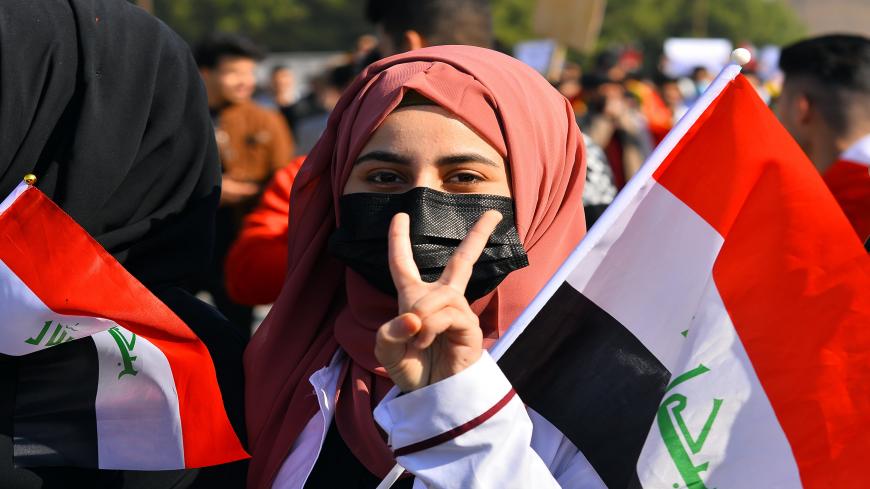 An Iraqi student, holding a flag, flashes the victory sign during anti-government protests in the Shiite city of Najaf, in central Iraq, Jan. 28, 2020. - HAIDAR HAMDANI/AFP via Getty Images

In the past eight months, groups of Iraqi young people formed various political entities. A source within the Independent High Electoral Commission (IHEC) told Al-Monitor that 15 new political entities are in the process of registering with IHEC.

Rahman al-Jubouri, a senior researcher at the Regional Center of the American University of Iraq, told Al-Monitor that 15 groups have submitted applications seeking to register with IHEC.

These groups are made up of Iraqi civil society activists and other activists in the recent protests who seek to run in the early elections that Iraqi Prime Minister Mustafa al-Kadhimi called for June 6, 2021.

Iraqi population is a very young one, 56% of Iraqis are under 24; and 19.83% are between the ages of 15-24. Official Iraqi unemployment is 12.8% according to World Bank (pre-COVID), likely higher, especially among youth.

The Harakat al-Waei (Awareness Movement) is among the new parties.

A few months ago, Salah al-Arabawi, former office director for Ammar al-Hakim, the leader of the Hikma bloc, announced his withdrawal from the bloc and started setting up Harakat al-Waei, which is made up of a group of young people who specialize in the fields of economics, finance, media, energy and sports.

Speaking to Al-Monitor on condition of anonymity, a member of one of the parties that is yet to be officially launched said, “We seek to be a successful alternative for the current parties. We are not the only youth party. There are other groups of young people that started new parties and they will be announced soon.”

So far, these parties have not announced their formation because they still have to obtain registration approval from IHEC. Yet they already started working at the organizational level.

Speaking to Al-Monitor from the movement’s headquarters in Jadriya neighborhood in Baghdad, Arabawi said, “The traditional parties — nationalist and sectarian — were made up of the ruling class from 2003 to 2018, including political Islam. The only option was to join the ranks of these parties to acquire the experience and benefit from their movements’ strengths and weaknesses.”

He noted, “The year 2018 was an important milestone and historical turning point in Iraq, as the election turnout equated to no more than 20%. That indicated that almost 80% of the Iraqi people are displeased with the ruling class, in the absence of an alternative. Based on that, we called back then for an alternative to replace the older generation.”

Arabawi and his associates aim to develop a government system by amending the Iraqi Constitution, which stipulates that the president shall be elected directly by the people, shall appoint the government based on the election results, and that there should be a pro-government and another opposition coalition in parliament.

Nevertheless, the public and observers have concerns that some of these young people's parties serve as unofficial fronts for the large parties. Sources inside the protest squares told Al-Monitor that Kadhimi, Hakim and leader of the State of Law Coalition Nouri al-Maliki are the most prominent figures who have worked on pushing the young people to the forefront in new formations.

Some parties reached out to the youth groups to have them join their ranks or form new entities, placing the focus on social media activists and those who are influential in the community.

Adel Badawi, professor of political science at Baghdad University, told Al-Monitor, “Some political forces have begun to push young people to form political parties that would attract the youths, upon which the upcoming elections will be based. That's why they are building their tactic on new figures among the youths.”

He said, “The youth forces — particularly the protest forces — are not good at the electoral tactics. Some of them do not know how to market themselves in the street. And most importantly the electoral system is still unclear. This is because the most important point in the electoral law — namely the distribution of electoral districts — has not been resolved yet. Thus, the youths could be manipulated in the elections, which would guarantee the current political forces’ return to power.”

Badawi added, “The youth forces have a good chance of winning [the elections] if they put forward a unified vision and [run as] a unified entity. Yet running in the elections through multiple entities and visions will reduce their chances and could result in them having an ineffective presence in parliament.”

Perhaps time will prevent these entities from convincing the public or presenting themselves as an alternative. The 10 months left for early elections are not enough for the young people to win popular bases that would have a weight in the elections, particularly if the protesters and youths run in numerous entities.

There are those who believe that the next stage is that of the youth. At the same time, and with a youth surge participating in the elections, observers see how difficult the race would be. Sajad Jiyad, former managing director of Al-Bayan Center for Planning and Studies, ruled out the possibility that “the youth parties win seats running against the old parties. There are no promising signs."

He told Al-Monitor, "In case the election law remains unchanged, the large parties will achieve great results in the elections. They have the arms, money and popular base.”

The recent assassinations in Iraq convey various messages, including discouraging by intimidation the young people from taking part in the elections or presenting themselves as an alternative to the existing parties.

The youth parties, which the traditional parties will push to the forefront as a substitute, are expected to be brought into prominence, particularly because of the financial and logistic support, which the independent youth parties that the October 2019 protests produced lack.

The youth do not seem to have a good chance in the elections, as they run against an integrated system armed with weapons, money, influence and foreign power. Their participation is therefore risky and could end them before they even start their journey.