Some of Iraq’s political parties seek to bring mass media celebrities on board for the upcoming legislative elections. 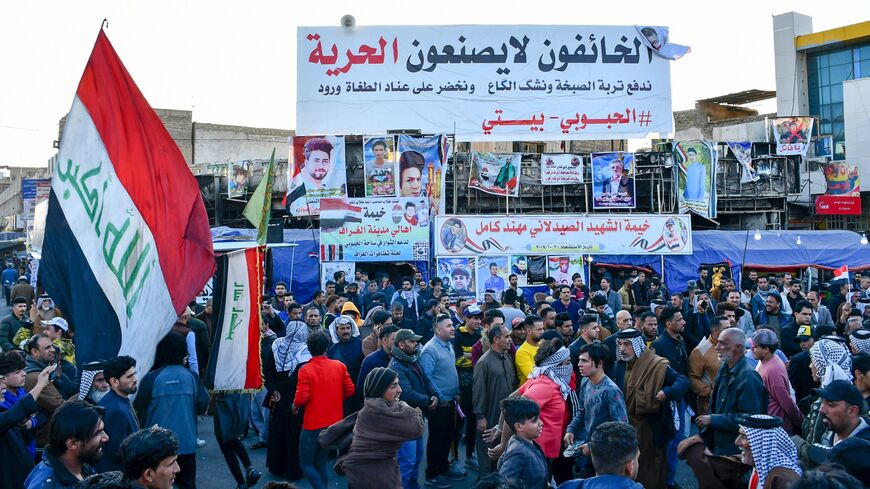 Iraqi political parties are attempting to recruit media celebrities who have backed the Iraqi protest movement in order to win votes in the Oct. 10, 2021, elections. Here, Iraqis wave the national flag during a gathering rejecting the nomination of Mohammed Tawfiq Allawi as prime minister-designate in the city of Nasiriyah in Iraq's southern Dhi Qar province on Feb. 2, 2020, following the resignation two months earlier of Prime Minister Adel Abdul Mahdi under growing street pressure. - ASAAD NIAZI/AFP via Getty Images

As Iraq’s government set the fifth general election since the fall of Saddam Hussein's regime in 2003 for Oct. 10, some political parties have resorted to a new strategy in preparation for the campaign.

The strategy consists of relying on famous media figures and social media celebrities with thousands of followers in a bid to attract new voter segments.

An office manager of a “frontline” party leader told Al-Monitor that his “party reached out to a large number of media professionals and social media celebrities, be they at home or abroad.”

He added, “While some have agreed to join us and take part in the election, others have not. So far, five media celebrities will be with us in the next election.”

The aforementioned strategy is not limited to long-standing parties, but it also involves newly formed parties. For instance, the Harakat al-Waei (Awareness Movement), which was established following the October 2019 protests, has sought to attract some famous media professionals, without, however, succeeding in bringing them all onboard.

Many celebrities and opinion-makers think their participation in political activity will reduce their audiences and the people’s trust they have long worked for. Many also think they are more powerful in the street than most politicians.

Al-Monitor has learned that these parties have made tempting offers to media professionals and social media celebrities in Iraq, including to manage their electoral campaigns, cover all their expenses and provide them grants of $50,000 or more, depending on how famous they are.

Ali Wajih, a cultural TV presenter on Asia TV and prominent blogger, told Al-Monitor, “Influencers who are friends of mine and I were given offers to join political movements and take part in the election, but we rejected them.”

Commenting on the reasons why he refused to join a political party and run in the election, Wajih said, “These parties are against the orientation I believe in.” He said he does not even want to join those few parties with whom he sometimes shares a similar outlook because he believes he is more influential in the public sphere than he would be under the banner of a particular party.

According to official statistics, voter turnout in the 2018 elections was about 45% — a percentage observers have questioned. That would mean that 55% abstained from voting and apparently do not support any of the political parties. Many of these citizens are believed to have greater faith in the media professionals and celebrities who criticize these parties and the country’s conditions.

By attracting celebrities and media professionals, political parties are seeking to gain the support of those who have abstained from voting in Iraqi elections, or at least in the last election in 2018. Many of these citizens are young people who took part in the protests that began in October 2019.

Political parties perceive that bringing public figures to their side would give them an advantage they need at the current stage. In contrast, in recent years they sought to have sectarian and nationalist figures on their side, particularly military figures who fought the war against the Islamic State. Today, the parties are looking for young people and influencers in the public sphere who were never affiliated with any political party.

Zeinab Rabie, a host at the local AlSharqiya Tube, told Al-Monitor that new parties established after the October 2019 protests tried to entice her to join, but that she refused out of fear that the parties in the end would not be all that different than traditional parties and because the new parties appeared to lack a clear political vision.

Some of the parties that had lashed out at celebrities have asked them to meet with party leaders in a bid to win over the public figures. Tempting offers made to these people included top jobs in state institutions such as being general managers, or consulting positions, Al-Monitor has learned. Jobs also were offered to relatives.

Ali al-Khalede, an Iraqi media professional with hundreds of thousands of followers on social media, told Al-Monitor he “received calls to take part in the election from most of the parties. They were not limited to a specific sect or party. There were Islamist Sunni and Shiite parties, as well as secular ones.”

He added, “I categorically rejected these calls, because they seek to exploit us, rather than investing in us for the very purpose of building the state. They seek to enhance their image through ours and our popularity, which has not been associated with thefts, murders or conspiracies.”

Media professionals and social media celebrities in Iraq have large audiences and are generally well trusted, which seems to position them to be strongly competitive in the election. The people’s trust increased in the past two years as many media figures and celebrities have supported and defended the protests. That is why the political parties perceive this trust as an opportunity they need to invest in so as to strengthen their influence in light of Iraqis’ resentment.