Unlike in previous years, Iran's celebrities went quiet during the June election. 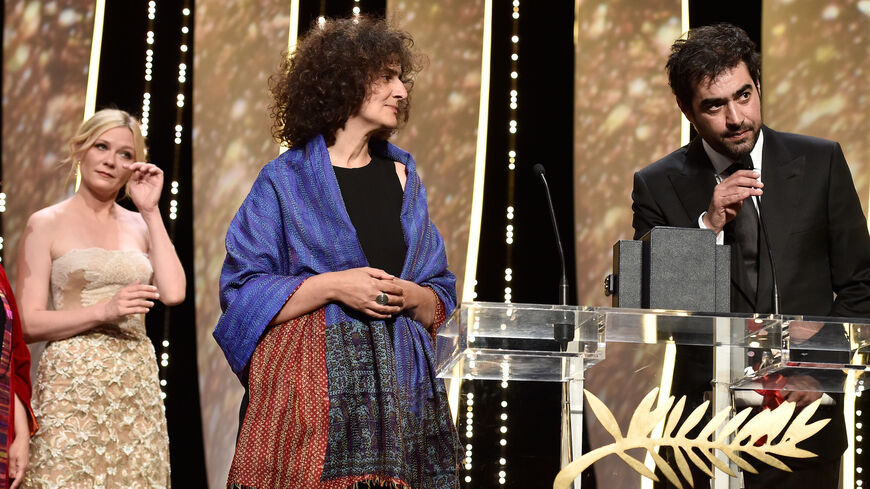 Iranian actor Shahab Hosseini talks on stage after being awarded the Best Actor prize for the movie "The Salesman" at the closing ceremony of the 69th annual Cannes Film Festival at Palais des Festivals on May 22, 2016, in Cannes, France. - Pascal Le Segretain/Getty Images

Celebrities have traditionally played an important role in Iran’s political sphere, calling on their supporters to vote for their favored candidates. But things are changing. In the latest presidential elections on June 18, celebrities went quiet.

This influential group of athletes, actors, singers and other artists began to play a central role in politics in the controversial 2009 elections, when many artists and social groups came out in support of candidate Mir Hossein Mousavi to prevent Mahmoud Ahmadinejad from being reelected. They also played an active role during the post-election protests, urging people to continue protesting against the government, sparking anger among the Iranian security apparatus.

Some pro-government political groups have tried to attract artists' support ever since.

Although the 2009 elections were disappointing for the celebrities who campaigned against Ahmadinejad, they did not pull back from the political public sphere. Four years later in the 2013 presidential vote, the artists, who were not at all happy with increasing government censorship and security crackdowns during Ahmadinejad’s second term, came out in support of moderate Hassan Rouhani.

"The security apparatus was outraged by the influence of celebrities in the Iranian political and social process," an Iranian director who asked not to be named told Al-Monitor. "For this reason, from the very beginning of Hassan Rouhani's election win, they tried to put pressure on the artists."

However, Rouhani’s first term in office did not meet all their expectations, and some celebrities faced even tougher restrictions.

Rouhani has maintained some support among the artist community. Ahead of the 2017 presidential vote, many celebrities, including acclaimed artists and athletes, declared their support for the incumbent. For instance, Iranian actor Shahab Hosseini, a Best Actor winner at the Cannes Film Festival, backed Rouhani, arguing that the “right” and “logical” choice is “trusting” Rouhani. In the 2021 elections, Hosseini stayed silent. Exiled legendary singer Ebi also supported Rouhani in 2016. In 2021, he posted a picture of himself and his wife on Instagram holding a banner saying no to the political system in Tehran.

The director continued, "During the second term of Rouhani's presidency, the pressure on the artists increased. Incidents such as leaked photos of some actors and artists or blocking the public screening of some films and plays were just some examples."

Rouhani's performance in the second four years sparked a lot of criticism among the public. Economic problems led to broader protests that spread nationwide, provoking a significant number of celebrities, like other people, into becoming disillusioned with the government and the entire ruling system.

Public anger in Iran intensified with two rounds of nationwide demonstrations in October 2017 and November 2019. Subsequently, a significant portion of Iranian celebrities spoke out against the government.

"Generally, celebrities follow society and try to find the pulse of the society and follow on the same path," an Iranian sociologist told Al-Monitor. The university professor, who preferred to remain anonymous, added, "You should not expect a celebrity to act like a political elite or a civil rights activist. A significant portion of these people would rather be followers than go their own way."

Under such circumstances, the recent boycott effort encouraged many Iranians not to vote in the June election. Most celebrities, unlike in previous elections, did not campaign for a particular candidate in the election. But neither did they back the boycott campaign.

Some boycotters criticized the celebrities for what they described as conservatism. They argued that celebrities who owe their fame to the people should have stood by them and spoken out in support of the boycott.

Not all celebrities stayed quiet. Some, particularly athletes, decided to support Principlist Ebrahim Raisi in the new atmosphere, even after having supported Reformist and moderate candidates in the past.

Nevertheless, the majority of Iranian celebrities stayed out of this year’s election. The Khabaronline news agency in Iran, which is close to the government, hosted art insiders on the Clubhouse app June 27 to discuss why the celebrities' silence. Abdul Javad Mousavi, a poet and journalist, called it a good thing and expressed hope that they would avoid politics forever and instead focus on their own fields.

Massoud Dehnamaki, a director who is said to be on the conservative end of the political spectrum, said, “One cannot say for sure that celebrities are now at odds with politics. Instead, they have become more dubious and behave more cautiously."

"Some of these celebrities even went to the polls but decided not to make their decision public," said Dehnamaki, whose war film "The Outcast" was one of biggest box office hits in the history of Iranian cinema.

Surely a variety of factors have played a role in the changing political and social behavior of Iranian celebrities. This group, torn between trying to connect with the people and frustration over their past involvement, has clearly decided not to spend its time on the political game this round. The security apparatus has also contributed to isolating this influential group.

Iran's celebrities could very well resume putting themselves at risk to support protests, strikes and popular discontent as dissatisfaction with the incompetency of the political system.