Iraqi government presses ahead with early elections next year

The Iraqi government is striving to make the legal and political preparations for elections in June 2021, amid multiple political and security challenges. 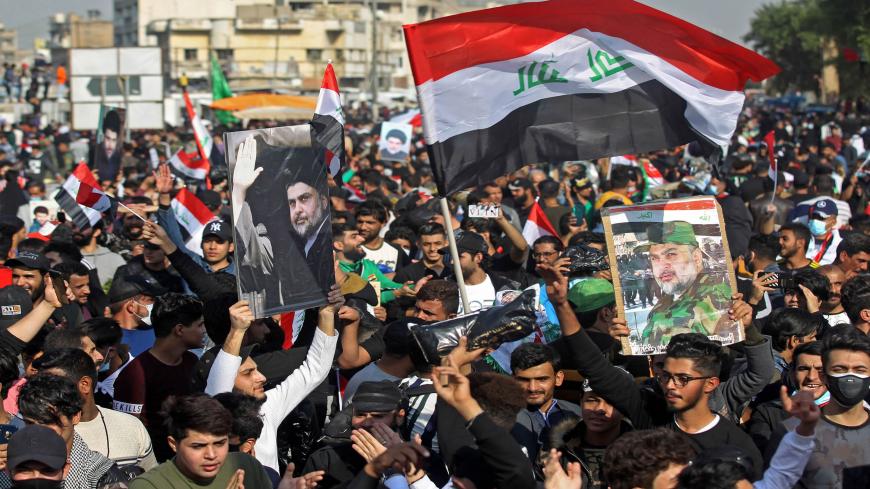 Supporters of Iraq's Shiite cleric Muqtada al-Sadr demonstrate in Tahrir Square, in a show of political power as the legislative elections are scheduled for next June, Baghdad, Iraq, Nov. 27, 2020. - Ahmad al-Rubaye/AFP via Getty Images

The Iraqi government is preparing for early elections, which has been a top demand in the protests.

The goverment of Prime Minister Mustafa al-Kadhimi is now moving ahead to plan for voting in June 2021, after finalizing a new electoral law in October. It is currently working on establishing a federal court that would be tasked with overseeing the elections. In cooperation with the parliament, the government is working to secure the funds to finance the elections in order to hold them on time.

Nevertheless, some political parties have expressed fear of electoral fraud, and even rejected the new electoral law and the way electoral constituencies are divided.

Former Prime Minister Haider al-Abadi's Al-Nasr Alliance hinted that it would boycott the elections if the government does not involve the United Nations in monitoring the polling stations.

Kadhimi government is indeed holding regular meetings with the UN representative in Iraq, Jeanine Hennis-Plasschaert, in order to prepare for the elections with the UN support. Plasschaert also has been visiting top Shiite cleric Ayatollah Ali Sistani frequently in order to bring all efforts together for successful elections.

The fraudulent voting process of the parliamentary elections in 2018 has sparked fear this could happen again, particularly since the violators were not sanctioned.

Ayat Muzaffar, spokesman for Al-Nasr Alliance told Al-Monitor that “boycotting the elections is placed on the table as an option that the alliance could resort to when it comes to early elections.”

Muzaffar said, “The government is required to ensure a safe electoral environment for all parties and candidates so as to ensure equal chances among all in this competition.”

Yet that does not only depend on Al-Nasr, as other political forces are also thinking of boycotting the elections, but have not taken a final decision at this time.

Raed Fahmy, secretary of the Central Committee of the Iraqi Communist Party, told Al-Monitor, “Boycotting the elections is the last option. We will be resorting to that if equal chances in the elections are not guaranteed.”

Fahmy, whose party allied with the Sairoon Alliance in the previous elections, believes that “talk about boycotting the elections may result in a growing despair among the people and push them to refrain from voting.”

Fahmy, a member of parliament, added, “We are still engaging in dialogues with the government to bring under control illegal weapons and prevent those involved in the bloodshed of the demonstrators from getting away with that. Yet in the absence of a serious move, boycotting [the elections] is an option that we may be forced to resort to.”

The Iraqi National Coalition, led by former Prime Minister Ayad Allawi, has not only expressed concerns about the procedures accompanying the voting process, but it also commented on the electoral law and the way the electoral districts are divided.

“Our coalition has objected to the electoral law and the distribution of electoral districts,” said Kadhim al-Shammari, spokesman for the National Coalition.

Speaking to Al-Monitor, Shammari expressed fear of a fraudulent voting process, and noted that one of the blocs is talking about winning the largest number of seats a few months ahead of the elections. “How will this victory happen? Where does this confidence come from?” he added.

Shammari did not name the bloc. Yet the Sairoon Alliance, led by Muqtada al-Sadr, is reiterating that it will get the largest number of votes and form the government.

Hussain al-Hindawi, the prime minister's election adviser, is trying to reassure the political forces that the government is doing everything to ensure a fair electoral process.

Speaking to Al-Monitor, Hindawi said, “The government has drawn up plans to secure the polling stations and avoid any violations during the voting process.”

He added, “Activating the law regulating the work of political parties would serve as a deterrent to the exploitation of public funds in the elections, and would stop any violations in the campaigns.”

Hindawi denied that the government has the intention to approach the political forces to discourage them from boycotting. “We are constantly reassuring [everyone] about the preparations for the elections, and we are working hard to make the elections fair,” he added.

Some political forces, such as the Communist Party, have demanded for the United Nations to oversee the elections. Hindawi said in this regard, “That cannot happen. … The UN cannot oversee the elections in Iraq.” Yet he indicated that the UN was approached for wide-scale monitoring of the voting process.

“So far, we have not received an answer from the UN,” Hindawi noted, adding, “The UN are the ones to decide on the number of observers [but] local institutions and party representatives will also be overseeing the elections.”