Egypt has written to the UN Security Council denouncing Ethiopia’s plan to move ahead with the second filling of its controversial dam on the Blue Nile, as international diplomacy builds to resume negotiations to solve the decadelong dispute between the Nile Basin countries. 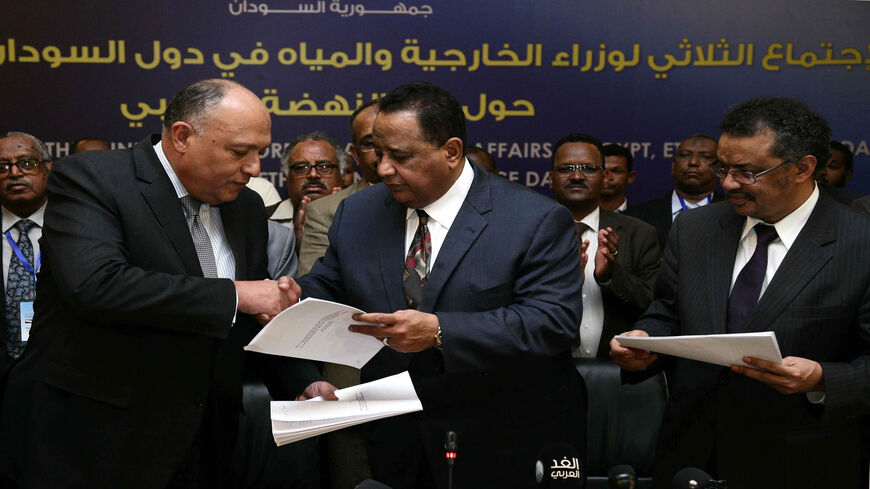 In a June 11 letter addressed to the United Nations Security Council, Egypt denounced Ethiopia’s plan to move ahead with the second filling of the Grand Ethiopian Renaissance Dam (GERD), without reaching a binding agreement with its neighboring downstream countries — Egypt and Sudan — on the process of filling and operating the dam.

Egypt noted that it regrettably finds it “necessary to, once again, inform the UN Security Council that negotiations on the GERD are at an impasse and that Ethiopia remains intent on imposing a fait accompli on Egypt and Sudan by continuing to impound the waters of the Blue Nile to fill the GERD reservoir.”

In this third letter since Egypt decided to resort to international parties to resolve the GERD crisis in 2020, Cairo stated, “The failure of negotiations on the GERD, the unilateral filling and operation of this dam, and its potential adverse effects will affect peace, security, and stability through the Nile Basin and the Horn of Africa.”

Addis Ababa plans to fill the GERD in the upcoming flood season in July and August, regardless of whether an agreement with the two downstream countries is reached. In 2020, Ethiopia unilaterally completed the first phase filling of the dam's reservoir with a capacity of 4.9 billion cubic meters, which angered Egypt and Sudan, which are currently working to avoid that same scenario this year.

Ahmed Hafez, the official spokesman for the Egyptian Ministry of Foreign Affairs, said in a June 11 statement that Egypt’s letter to the Security Council reveals to the international community the reality of the intransigent Ethiopian positions that have impeded the efforts made over the past months to reach a fair, balanced and legally binding agreement on the GERD within the framework of the negotiations sponsored by the African Union (AU).

Former Egyptian Foreign Minister Mohamed Orabi told Al-Monitor the letter shows that Egypt is ready to take all measures to resolve the dispute over the GERD and stop “Ethiopian intransigence, using diplomacy or any other means, if Addis Ababa continues to be stubborn.”

He said that Ethiopia has violated all international rules and laws and the AU Charter in this dispute. Consequently, the international community must realize that a new hotbed of tension that may thus arise in the region must be nipped in the bud. According to Orabi this is why Egypt briefed the Security Council with the details of the crisis and its causes to urge it to assume its responsibilities to maintain international peace and security.

In its letter, Egypt called on the international community to get involved in the conflict and help reach a peaceful settlement.

In June 2020, the UN Security Council held an open session on the GERD dispute at the request of Egypt. During the session, the world body urged the three countries to reach a consensus and warned against unilateral measures. The three parties then agreed to move forward with the AU-sponsored negotiations.

However, the AU's persistent attempts to broker a deal that would end the stalemate in negotiations have repeatedly failed. In April, the last round of talks, held in Kinshasa, did not lead to an agreement to resume negotiations, as each side accused the other of obstructing the talks.

Egypt and Sudan have repeatedly called for an international quartet to mediate the talks, comprising the UN, European Union and the United States, alongside the AU. However, Ethiopia insists that the mediation be limited to the AU alone.

Egypt and Sudan want a legally binding agreement on filling and operating the GERD that includes an effective and binding mechanism for settling future disputes. But Ethiopia wants a deal that includes nonbinding guidelines.

He noted that the war in the Ethiopian region of Tigray is a priority for the US administration and the international community compared to the GERD. “There must be decisive international efforts to bring Ethiopia back to the negotiation table and urge it to adhere to international law, as well as to the UN and AU charters.”

US Special Envoy for the Horn of Africa Jeffrey Feltman toured Africa in May, visiting the three countries involved in the GERD dispute, in an attempt to break the deadlock in negotiations with growing fears of a military escalation that could ignite the already volatile region.

After the tour, the US State Department called on the three countries to resume negotiations quickly and said that the United States is committed to providing political and technical support to facilitate a successful outcome.

Abdel Moneim Saeed, a member of the Egyptian Shura Council (Senate) and head of the advisory body of the Egyptian Center for Strategic Studies, told Al-Monitor that Egypt is trying relentlessly to pressure Ethiopia to reach an agreement on filling and operating the dam.

He noted that although there is controversy over Ethiopia’s failure to complete the necessary engineering works that would enable it to complete the second filling in full — as it had planned with a capacity of 13.5 billion cubic meters of water — Egypt and Sudan still have fears that Addis Ababa will move forward with unilateral measures. This move is a violation of the Declaration of Principles signed between the three countries in 2015, he stressed.

Saeed said that the internal turmoil that Ethiopia is witnessing — represented by ethnic and political divisions as well as the civil war in Tigray, not to mention the international condemnation — are all matters that pressure Addis Ababa and weaken its position in front of the two downstream countries in the GERD dispute.

On June 9, Egypt and Sudan requested international efforts to help reach a settlement over the GERD. Officials from the two countries agreed to coordinate efforts to push Ethiopia to seriously negotiate an agreement.

Saeed noted, “The current situation is very dynamic. All circumstances are in favor of Egypt and Sudan. Ethiopia's continued rejection of any international mediation embarrasses it before the international community and increases pressure on it to return to the negotiation table with a real will to sign an agreement that satisfies all parties.”

On June 15, the Arab foreign ministers will hold an extraordinary session in the Qatari capital Doha to discuss the GERD crisis, at the request of Egypt and Sudan.

H.A. Hellyer, a scholar at the Carnegie Endowment for International Peace and Cambridge University, told Al-Monitor, “The meeting in Doha shows how quickly the geopolitics of this region can go through flux — it was only months ago that Cairo and Riyadh were at loggerheads with Doha in a very open and public fashion. Now, Doha is the site of hosting Arab foreign ministers to discuss a way forward that benefits specifically Cairo, as well as Khartoum, in the [GERD] crisis."