Egypt's relations with Hamas have improved greatly, but Cairo insists on keeping Gaza's reconstruction money out of its hands. 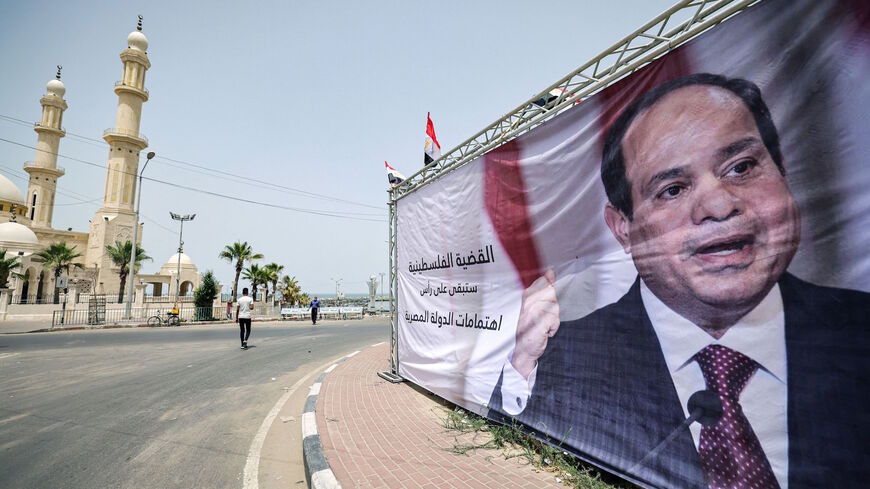 This picture taken on May 31, 2021, shows a view of a banner depicting Egypt's President Abdel Fattah al-Sisi with a quote from him reading in Arabic, "The Palestinian issue will remain at the top of the priorities of the Egyptian state." - MOHAMMED ABED/AFP via Getty Images

CAIRO — Egypt is talking more to Hamas than ever before, but funds destined for the reconstruction of the Gaza Strip will soon be a new contentious issue between the two sides, say political and security analysts.

"The reconstruction money will become the center of conflicts between the two sides in the future," Samir Ghattas, head of the Egyptian think tank Middle East Forum for Strategic Studies and National Security, told Al-Monitor. "There is belief in Cairo that Hamas will use the money for purposes other than reconstruction if it lays its hands on it."

Vast areas of Gaza were devastated during its 11-day war with Israel in May, provoked by clashes between Israeli Jews and Arabs in the east Jerusalem neighborhood of Sheikh Jarrah and attacks by Israeli police against Palestinian Muslims praying at Al-Aqsa Mosque.

Egypt, which played a vital role in brokering a cease-fire May 20, pledged $500 million for Gaza's reconstruction. Cairo insists that reconstruction work be done through its own construction companies, meaning it will not put a penny in the hands of the Hamas leaders.

The movement insists, however, on managing the reconstruction and the money given for it.

Analysts say Egypt, which has been offering foodstuffs and medical supplies to Gaza since the beginning of the war with Israel May 10, does not want living conditions to deteriorate even more in the Palestinian territory that shares a border with Egypt's Sinai. A crisis would have grave security implications for Sinai. However, Egypt also does not want to see an empowered Hamas along its border.

"Hamas usually uses aid money to buy arms and make itself strong at the expense of the residents of Gaza," Ghattas said.

Cairo's relations with Hamas went from bad before the 2011 uprising in Egypt to worse, with accusations by post-uprising authorities that Hamas was involved in jailbreaks during the uprising. Egyptian authorities accused Hamas of breaking out its own members and members of the Muslim Brotherhood, the Islamist movement outlawed in Egypt.

Relations between the two sides continued to worsen because of growing hostility to Egypt among Hamas followers in Gaza and Egyptian press reports accusing Hamas of training militants to carry out attacks in Egypt.

Ties improved some after 2017, when Hamas formulated a new charter that did not mention the Muslim Brotherhood, its mother organization. However, decision-makers in Cairo still see Hamas as an ideological offshoot of the Brotherhood.

"This belief is deeply rooted among Egyptian decision-makers," Muneer Adeeb, a leading commentator on Islamist movements, told Al-Monitor. "Hamas is always represented in the meetings of the International Organization of the Muslim Brotherhood."

Links between Hamas and the Brotherhood, Adeeb said, are worrying to Egypt because the Brotherhood's goal continues to be bringing the Egyptian regime down.

Qatari Foreign Minister Mohamed Abdulrahman, who met Egyptian President Abdel Fatah al-Sisi in Cairo May 25, said May 27, "We want people to know that the Palestinian people are not Hamas," even though Qatar is a traditional backer of the movement. He added that his country will deliver financial support to those who most need it in the Palestinian territories. A day earlier, Qatar said it would contribute $500 million to Gaza's reconstruction.

On May 25, US Secretary of State Antony Blinken said his country would try to help Gaza without aiding Hamas. Other countries are deciding their next moves on Gaza after discussions with Egypt.

Nevertheless, Egypt's Hamas policy is fueled by fears that Hamas will play a role in destabilizing Sinai in the future, with a branch of the Islamic State group still active in the Egyptian territory. Cairo remains concerned about relations between Hamas and Iran, Qatar and Turkey, three regional rivals to Egypt, although there are signs that relations between Cairo and the latter two countries will improve.

"Egypt was always concerned about relations between Hamas and these three states," Khaled Okasha, the head of local think tank Egyptian Center for Strategic Studies, told Al-Monitor. "There was belief in Egypt that Hamas liaises between terrorist groups in Sinai and these states, which offered logistical support to these groups."

Egypt paid in the blood of its policemen and soldiers to defang IS in Sinai. Since they swore allegiance to IS in late 2014, the members of the terrorist organization have been reduced from dreams of the so-called Islamic caliphate to hiding among citizens in North Sinai and in the mountains of central Sinai.

Egypt also wants to create opportunities for its contracting companies and construction material factories in other countries. Following years of economic slump, Egypt is repositioning itself as a project partner and major source of economic development assistance and trade in Africa and in the Arab region. It is building a gigantic dam in Tanzania, seeking construction opportunities in Libya and eying a major chunk of the reconstruction of Iraqi cities ravaged during the war against IS.

"Egypt has already turned into an effective reconstruction power in the Arab and African regions," Egyptian economist Rashad Abdo told Al-Monitor. "It wants to use its economic capabilities in doing business and also helping fellow Arab and African states."

Egypt's construction material exports were worth $3.9 billion in the first eight months of 2020, according to the Construction Materials Council.

Dozens of Egyptian construction companies are executing hundreds of construction projects in the country that are keeping the national workforce and construction material factories busy.

However, Egypt must still maintain its influence on the Palestinian group, as it derives some of its regional and international weight from its sway with the movement.

Israel is also making the reconstruction of Gaza conditional on progress toward a hostage swap deal with Hamas. The head of Hamas' political bureau, Ismail Haniyeh, is expected to visit Cairo soon to take part in Egypt-sponsored negotiations on a long-term truce with Israel and the exchange of hostages between the two sides.

"Egypt is keen on keeping its channels of communication with Hamas open, despite the ideological differences with the Palestinian movement," Palestinian political analyst Osama Shaath told Al-Monitor. "Egypt is afraid that Hamas will be used by rival regional powers as a thorn in Egyptian flesh."