The Egyptian president said the actions taken by his Tunisian counterpart, Kais Saied, will bring 'stability to Tunisia.' 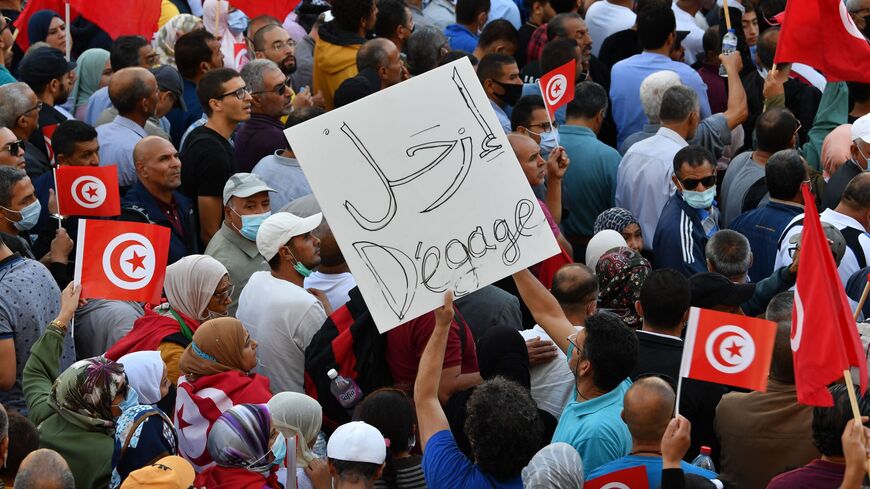 Tunisians raise national flags during a rally against their president in the capital Tunis, on Oct. 10. More than 5,000 people flocked to Avenue Bourguiba to demonstrate at the call of various parties opposed to President Kais Saied, including the Islamist-inspired Ennahdha party. - FETHI BELAID/AFP via Getty Images

CAIRO – Egyptian President Abdel Fattah al-Sisi has declared support for the measures taken by Tunisian President Kais Saied on July 25, the highest such endorsement to come from Egypt.

During a phone conversation with the Tunisian president on Oct. 6, Sisi said these measures would create a better future for Tunisia's people.

"They will bring about stability to Tunisia," the Egyptian president said. adding that his country is ready to roll out all necessary support to Tunisia.

Saied sacked his country's cabinet, dissolved its parliament which was controlled by Ennahda, an ideological offshoot of the Muslim Brotherhood, stripped his country's MPs of their immunity and is opening alleged corruption files.

These measures initially won support from a wide section of the Tunisian people, but almost two months later they are proving divisive, with the Islamists and pro-democracy groups accusing Saied of usurping Tunisia's hard-won democracy.

Sisi was at the heart of the army-backed uprising against the Muslim Brotherhood regime in Egypt in mid-2013, only a year after the Islamist organization, which has spinoffs in almost all Arab countries, rose to power in Egypt. As minister of defense, Sisi led the Egyptian army to side with those opposing Muslim Brotherhood president Mohamed Morsi.

He then ran for president and started an all-out crackdown on the Islamist organization, putting most of its leaders and senior members in jail, after outlawing it, freezing its assets and drying up its financing sources.

The Egyptian leader is also mounting a regional offensive against the Islamist organization, campaigning for its illegalization in other countries. Some of Egypt's allies, including the United Arab Emirates, Saudi Arabia and Bahrain, have already outlawed the group.

"Egypt has a problem with all extremist organizations because it considers them a threat to its national security," Muneer Adeeb, a leading Egyptian Islamism researcher, told Al-Monitor. "Egypt rolls out its expertise in the fight against these organizations to other countries."

Saied visited Egypt almost three months before he took his measures against Ennahda, leading some people to guess that he is being mentored by Sisi.

There is also apparently role reversal in Tunisia's copying the Egyptian anti-Muslim Brotherhood experience. Tunisia was home to the first spark of what came to be known as the 'Arab Spring' uprisings in 2011, bringing regimes in some countries down and political forces in others up and setting off unending civil wars in still others.

Egypt was the first country to contract the Arab Spring contagion from Tunisia, followed by neighboring Libya and then Syria and Yemen. Now Tunisia seems to be learning a lesson from Egypt in combating political Islam.

In a way, this shows that developments on the Tunisian political stage can be assuming a regional dimension. Pro-political Islam regional powers are reacting angrily – even in a veiled manner – to what is happening in Tunisia, and those opposing political Islam support Saied.

For Egypt, local analysts said, Tunisia is a matter of national security.

"There are many similarities between the two countries," Said Sadek, a political sociology professor at the German University in Cairo, told Al-Monitor. "Political conditions in Tunisia can complicate the situation in Libya, especially with expected attempts by Libya's Brotherhood to remain on the stage as long as possible."

The political weakening of the Muslim Brotherhood in Tunisia may reverberate in Libya's active branch of the same movement. Tunisia's Brotherhood, according to some reports, offered solid support to its Libyan counterpart over the past years, including providing them with supplies.

Egypt's regional rival, Turkey, pinned its hopes on Tunisia's Islamists to help turn the country into a launch pad for logistical support to pro-Turkey Islamist groups and mercenaries in Libya. Egypt used to sponsor Turkey's opposite side in the Libyan conflict, namely the Libyan National Army which controls most of eastern Libya, including the area along the shared Egyptian-Libyan border.

Libya has been a security headache for Egypt since the downfall of the Muammar Gaddafi regime in 2011, which caused the North African country to slide into chaos and then civil war. Egyptian authorities say the shared border with Libya had turned into a smuggling hot spot, including arms for Islamic State terrorists fighting the Egyptian army in Sinai.

The empowerment of the Muslim Brotherhood and pro-Turkey factions in Libya would have caused more security problems to Egypt, analysts said.

In June 2020, Sisi drew a red line around most of eastern Libya, threatening to intervene militarily into the country if Turkey-backed militias entered.

This was apparently why the Egyptian president supported the measures taken by President Saied on July 25. Sisi sent his Foreign Minister, Sameh Shoukry, to Tunis eight days later to pledge full support.

In the months since Saied visited Cairo, Egypt has been trying to offer support to Tunisia, including by sending medical aid for its growing COVID-19 infections.

Tunisia, a non-permanent Security Council member, reciprocated by backing Egypt in its row with Ethiopia over its Nile dam, including by drafting a resolution for a legally binding deal.

Nevertheless, Sisi's latest pledge of support to Saied is stirring up speculation over what he can offer the Tunisian president while his country wades deeper into its political and economic crises.

Pro and anti-Saied demonstrators are on the streets already, amid accusations for the Tunisian president that he is charting a new despotic course. Tunisia's economic problems keep getting worse and the country's health crisis is still far from solved.

Developments in Tunisia are also raising international concern. "Tunisia is badly in need of Egyptian support, given Egypt's regional weight," Hammami said. "Egypt can use this weight in helping Tunisia get loans and financial support from other countries."