Tunisian President Saied Kais recently paid his first visit to Egypt since assuming power in 2019, in what analysts say is a move aimed at cementing relations in the face of the Muslim Brotherhood. 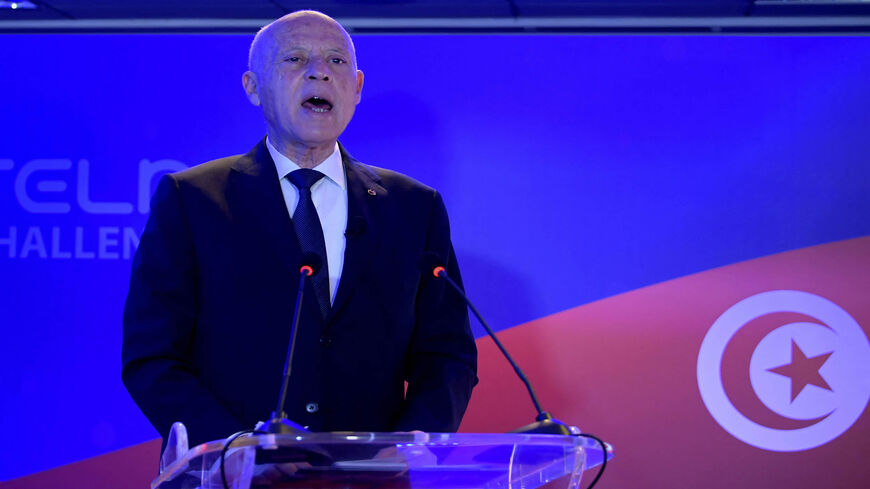 On his first official visit to Egypt since he assumed power in 2019, Tunisian President Kais Saied arrived April 9 in Cairo on a three-day visit that comes amid a drastic change in regional and internal dynamics.

At a joint press conference with his Egyptian counterpart in Cairo April 10, Saied said that he agreed with President Abdel Fattah al-Sisi on the importance of bilateral and regional relations.

Rafaa Tabib, a professor of political anthropology at the University of Manouba, told Al-Monitor that as far as Egypt is concerned, the visit came amid the faltering Grand Ethiopian Renaissance Dam (GERD) negotiations between Cairo and Addis Ababa.

Tunisia, he said, is a nonpermanent Arab member of the United Nations Security Council, and it will represent Egypt within the council during the coming period of major diplomatic conflict between Cairo and Addis Ababa.

“With this visit Sisi has seemingly managed to have a clear and explicit Tunisian recognition of the Egyptian rights in the Nile waters, as explicitly expressed by the Tunisian president during the joint press conference,” he added.

Concerning the dam issue, Saied said at the joint press conference with Sisi, “We are looking for just solutions, but Egypt’s national security is part of our security and we shall adopt Egypt’s position in any international forum.”

He stressed, “We will never accept any compromise as far as Egypt’s water security is concerned. We want fair solutions, but we shall not accept solutions that come at the expense of Egypt and our nation.”

The last round of talks between Egypt, Ethiopia and Sudan on the GERD, held on April 6 in Kinshasa, failed to find a settlement to the decade-long dispute between the three parties. Cairo and Khartoum fear Addis Ababa’s dam on the Blue Nile will affect their shares of the war.

On April 5, Sisi warned that all options were open when it comes to the GERD crisis. During the opening event of a new government complex, he said, “I am telling our brothers in Ethiopia, let’s not reach the point where you touch a drop of Egypt’s water, because all options are open.”

The Libyan file was also strongly present during the talks between Saied and Sisi. The Egyptian president said that he discussed with his Tunisian counterpart the latest developments in Libya.

“We reiterated our readiness to provide all forms of support in order to enable [Libya] to fulfill its role in managing the transitional phase in a bid to hold the elections scheduled for the end of this year, to end foreign interference and to have all foreign forces, mercenaries, fighters and foreign terrorists out of Libya in a manner that helps the country restore its full and desired stability, preserve its sovereignty, territorial integrity and the capabilities of its people,” he added.

Mohamed Bettaib, a Tunisian journalist and political analyst focusing on Libyan affairs who writes for Africagate News, told Al-Monitor, “The Libyan issue is a matter of national security for the two countries, which share broad land and sea borders with it. Their strategic, economic and security interests are linked to the stability of the situation in Libya, especially in terms of increasing the volume of commercial exchanges and channeling the excess Egyptian and Tunisian manpower toward the Libyan market. Therefore, they will work to ensure that the new Libyan government succeeds in imposing some sort of stability during the transitional period that the country is going through in the wake of years of devastating war.”

Bettaib added, “The two countries also share the same vision regarding the presence of Turkish mercenaries on Libyan soil, and they have the same security concerns regarding the presence of foreign fighters in Libya who were fighting in Syria and Iraq within the ranks of armed jihadist groups. There are even Tunisian fighters fighting in Libya, as thousands of youths had left Tunisia between 2011 and 2014 to join the fighting in Syria and Iraq. Therefore, the Egyptian-Tunisian coordination with regard to the Libyan issue appears necessary for the two parties at this point.”

The third major issue that the Tunisian president discussed with Sisi and that resonated at the joint conference in Cairo is the security issue and the fight against terrorism and extremism.

“We stressed the importance of boosting cooperation in the field of combating terrorism in all its forms and aspects … as well as confronting all terrorist organizations without exception, all the while undermining their ability to lure or recruit new elements and dry up their sources of funding. We also stressed the importance of confronting extremist ideology that poses a threat to the region and its people,” Sisi stressed.

Sisi’s statement seems to suggest that he does not exclude the Muslim Brotherhood, which has been classified as a terrorist organization in Egypt since December 2013. This comes as the Tunisia president battles the Ennahda movement, which some analysts say is the historical extension of the Muslim Brotherhood in Tunisia. Ennahda, for its part, maintains that is has no affiliation with the Brotherhood or any international organizations.

Abid Khalifi, a Tunisian academic specializing in the affairs of Islamic groups at the University of Manouba, told Al-Monitor that after Saied took office in September 2019, the Tunisian political scene witnessed several changes. He explained the relationship between Saied and Rashid Ghannoushi, president of the Ennahda movement that holds the parliamentary majority, got so tense due to the hegemony that the Islamic movement has always imposed on its allies and opponents. This is why Saied is currently closer to Sisi’s perception of Islamists, namely the Brotherhood, as the two oppose political Islam, he said.

This visit, Khalifi noted, may have future implications on this issue, especially considering that the Egyptian side has more than 90 years of experience in dealing with the Muslim Brotherhood.

Saied’s visit to Cairo will seemingly raise the level of cooperation between the two countries, especially as far as the powers of the president are concerned, namely defense and foreign relations — as the Tunisian constitution divides the executive powers between the prime minister and the president. Meanwhile, this visit will further deepen the gap between Saied and the Ennahda movement, to whom the Egyptian regime is an opponent.