As Turkey faces a currency crisis, its toughest in years, Egyptians are enjoying the spectacle from the sidelines, remembering many confrontations over the past decade. 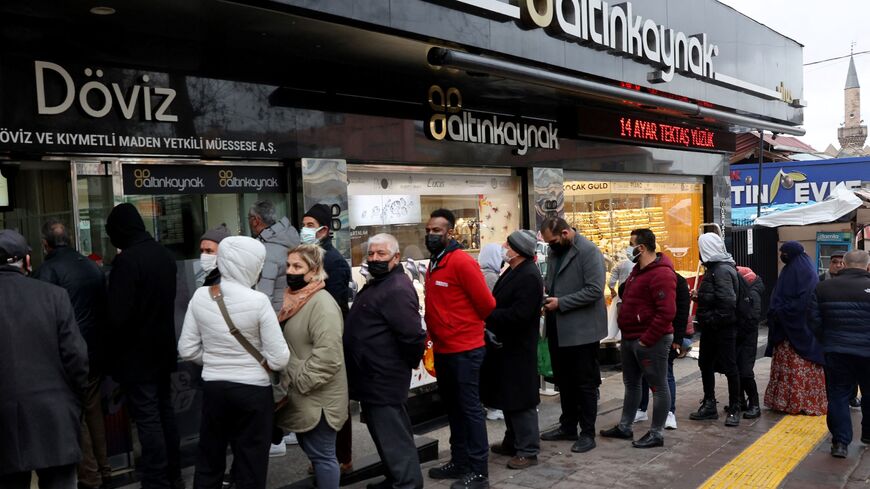 CAIRO – Turkey is not Egypt's largest trading partner. The Egyptian pound is not pegged to the Turkish lira in any manner.

Nonetheless, Egyptians have been closely following Turkey's currency crisis, and there is elation in Egypt at the sharp decline in the exchange rate of the Turkish national currency.

Some people have even set up what they called 'Lira Meter', an around-the-clock measure of the drop in the value of the lira against foreign currencies, including against the Egyptian pound.

"Egyptians are rejoicing at the Turkish currency crisis because of Turkey's negative policies toward Egypt in the past decade or so," Mohamed Rabie, an international relations researcher at local think tank, Arab Center for Studies and Research, told Al-Monitor.

Turkey and Egypt have been standing at opposite sides of the ideological spectrum, especially in recent years. The government of Turkish President Recep Tayyip Erdogan did not welcome the 2013 army-backed uprising in Egypt against Muslim Brotherhood president Mohamed Morsi.

Erdogan also criticized Egypt's incumbent President Abdel Fattah al-Sisi, the army chief who led the military establishment in the uprising against Morsi. Sisi then won the first post-Morsi presidential election by a landslide.

But Erdogan maintained his backing for the Muslim Brotherhood in Egypt, lashing out at Egyptian courts for sentencing the leaders and the members of Morsi's movement.

Egypt banned the movement and its party, closed down their offices and seized their funds and assets. The country also started a regional war against it, considering it the mother of all terrorist groups.

"Erdogan was especially angry at Egypt for cracking down on the Muslim Brotherhood," Muneer Adeeb, an Egyptian writer specialized in Islamism, told Al-Monitor. "The Brotherhood was the Turkish president's tool in reviving the Ottoman Empire, not only in Egypt, but also in the whole region."

Turkey also tried to undermine Egypt regionally and internationally, including at international forums. It sought a foothold in Sudan and Libya, which border Egypt's south and west respectively.

Turkey also followed what Egyptian analysts described as destabilizing policies in the East Mediterranean, a region with growing geostrategic importance for Egypt, given the Arab country's newfound natural gas wealth.

Rabie said, "These policies were manifested in the 2019 security and maritime boundary delimitation agreements the Turkish government signed with Libya as well as Turkish exploration for gas in the East Mediterranean."

Turkey also offered support to Ethiopia for its construction of a gigantic dam across the Blue Nile, the main tributary of the Nile River, which gives Egypt over 90 percent of its water.

This is all present in the minds of most Egyptians as they follow the Turkish currency crisis. The national glee is clear on social media.

On the streets, some people view the new crisis as a chance for Erdogan to pay for what they describe as the 'harms' he did to Egypt.

"I have been following the Turkish currency crisis from the very beginning," Sameh Osman, a civil servant in his mid-forties, told Al-Monitor. "I expect the value of the Turkish lira to keep tumbling in the coming period."

In crowing over the lira's loss of value, Egyptians may be thinking that what goes around, comes around.  When Egypt floated its national currency in November 2016, Turkey-backed Muslim Brotherhood activists celebrated the subsequent drop in the value of the Egyptian pound.

The Central Bank of Egypt had to liberalize the exchange rate of the pound to eradicate a then-thriving parallel foreign currency market and restore investors' confidence in the national economy.

However, the same decision caused the pound to significantly depreciate in value, losing most of its value to foreign currencies, especially the US dollar, the main trading, import and export currency in this country.

The drop in the Turkish lira, local economists say, will benefit the Egyptian economy in many ways.

"Egypt can stand out as an alternative investment destination to Turkey, especially if the currency crisis worsens in the coming period," Khaled al-Shafie, the head of the local think tank, Capital Center for Studies and Economic Research, told Al-Monitor. "The expected drop in the value of Turkish goods will also benefit the Egyptian industrial sector, which partly depends on raw material imports from Turkey."

Trade between Egypt and Turkey was largely unaffected by tense relations in the past years. The exchange amounted to $4.7 billion last year. Turkish investments in Egypt amount to $2.5 billion.

Public exaltation at the depreciation of the lira also comes as Cairo and Ankara take steps to mend their fences. Government officials from the two countries met several times in the past months to explore the way ahead.

Reports say Egypt has given the Turkish side a list of demands, including the suspension of support to the Muslim Brotherhood, stopping media attacks against Egypt, and withdrawing Turkey-paid mercenaries in Libya.

However, Egyptians reaction to the currency crisis proves that Egyptians' memory is strong and unforgiving, analysts said, and that may put pressure on the Egyptian government.

"The problem is that Egyptians will not accept a mending of fences with Turkey that harms Egyptian interests," Rabie said. "I am afraid the government may lose its credibility if it moves ahead with reconciliation."