Economists expect Egypt's central bank to loosen its grip on the exchange rate of the Egyptian pound in its meeting later this month, but the possible move is fraught with fears from a sharp rise in commodity prices. 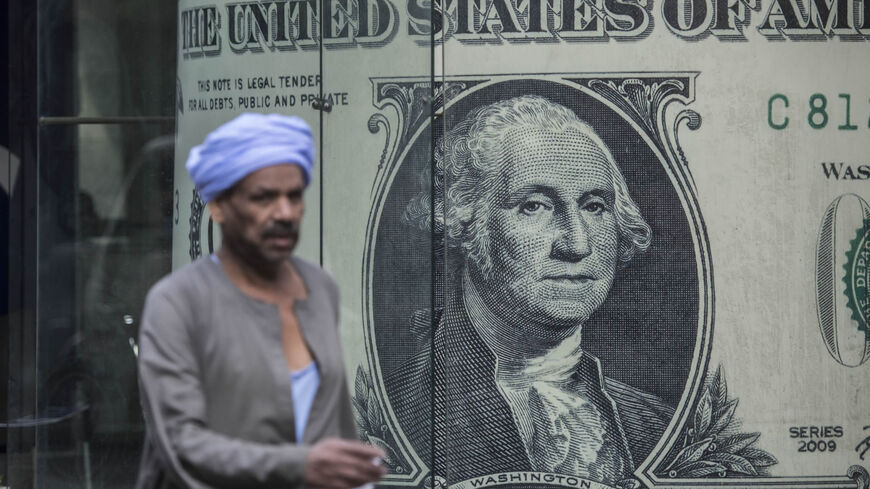 CAIRO — Egypt's monetary planners face a number of tough options in their desire to forestall further deterioration in the value of the Egyptian pound and rein in the rise in the exchange rate of the US dollar, the main import currency in the country.

The Monetary Policy Committee, the decision-making body of the Central Bank of Egypt, will convene Sept. 22, most probably to decide the future of the exchange rate for the next months.

The central bank has been following a controlled exchange rate since it allowed the Egyptian pound to initially float freely in November 2016.

Intervention by the central bank to prop up the national currency increased, especially with the Russian war on Ukraine, an international development that has had far-reaching effects on the Egyptian economy and the life of Egyptians and increased pressures on the local currency.

Nevertheless, this policy has had its downsides, economists said.

"A controlled exchange rate gives an unreal value for the national currency," Alia al-Mahdi, professor of economics at Cairo University, told Al-Monitor. "This opens the door for the presence of two exchange rates for the same currency — one inside the banks and another outside them."

Egypt, among the world's largest importers of wheat, used to depend heavily on wheat imports from Russia and Ukraine.

In 2021, almost 80% of wheat imports for the populous Arab country came from the two countries, now locked in what appears to be an unending war.

Together with depriving Egypt of wheat supplies and forcing it to pay more for the same amounts of the cereal, the war also held back millions of tourists who used to come to Egypt from the two countries.

"The deterioration that happened in the tourism sector as a result of the war has had deep impacts on the national economy," Khaled al-Shafie, head of local think tank Capital Center for Economic Research, told Al-Monitor.

Apart from contributing 11.9% of the Egyptian gross domestic product, tourism employs 9.5% of the national workforce of 26 million.

Compounding losses in the tourism sector was also the flight of billions of dollars in foreign capital from the country.

These negatives reportedly cost former Central Bank Gov. Tarek Amer his job in mid-August. Amer said in a statement that he preferred to leave his post to allow other people to complete the successful development process under Egyptian President Abdel Fattah al-Sisi.

Nonetheless, the talk in Cairo is that Amer was subjected to intense pressures because of his failures in constraining the Egyptian pound's loss of value against foreign currencies.

Amer reportedly preferred a gradual flotation of the exchange rate of the pound to prevent sudden shocks in the local market.

The same policy is credited for restraining commodity prices, especially those of food, and keeping their rise within considerably tolerable limits.

The inflation rate reached 16.7% in August, from 15.6% in July, but this is causing suffering to tens of millions of consumers in a country where 27.9% of the population of 106.5 million is poor.

The central bank tries to hold down the runaway inflation by reining in excess liquidity in the market.

The Egyptian pound has already lost around 18% of its value against the US dollar since February.

"There is still a general feeling that the pound is not priced fairly by the central bank," Mahdi said.

Some local traders are reportedly holding back commodities, especially in the car market, while others are tying their commodities to a dollar exchange rate higher than the one declared by the central bank.

There is also talk of people hoarding dollars to either cushion their savings against fluctuations in the value of the national currency, or in expectation of further depreciation in the value of the pound against the greenback in the coming period.

This expectation comes as some people expect the central bank to opt for a free flotation of the Egyptian pound during its meeting Sept. 22, and as Egypt continues to negotiate with the International Monetary Fund over a new loan.

Egypt is under intense pressure to increase its foreign currency revenues. The Arab country has several international obligations, with some economists estimating these obligations at tens of billions of dollars in 2023, even as the government says they are much less.

Decisions taken by the government following the Russian war on Ukraine to reduce demand for the greenback and protect the national currency against further depreciation have given the pound a temporary respite.

Nevertheless, the same decisions, which included a mandatory letter of credit from the banks for import operations, have stalled the import movement, sending importers imploring the government and the banks to take action to allow the release of cargos from the nation's ports and make the necessary dollars available.

The same decisions also put the brakes on production in some important sectors.

In May, Sisi intervened by absolving some imports, including production requirements from the credit letter requirement.

On Sept. 8, he asked Prime Minister Mustafa Madbouly to take action to help producers get their import needs.

Egypt, he said, tries to raise its exports to $100 billion a year and this makes it necessary for the government to help importers get production requirements.

Meanwhile, there are fears that the expected flotation of the pound will cause commodity prices in the market to shoot up in a manner that will make most commodities within reach of the moneyed only.

"The free flotation of the pound will necessarily lead to a sharp rise in commodity prices because most commodities in the market are imported from other countries," said Mohamed Abdel Hamid, member of the Committee on Economic Affairs in the House of Representatives (lower chamber of parliament). He told Al-Monitor, "We are badly in need of increasing production to reduce dependence on imports."