Egypt's latest flotation of its currency may rein in its thriving foreign currency black market, but economists cannot see an end to this market in the near future. 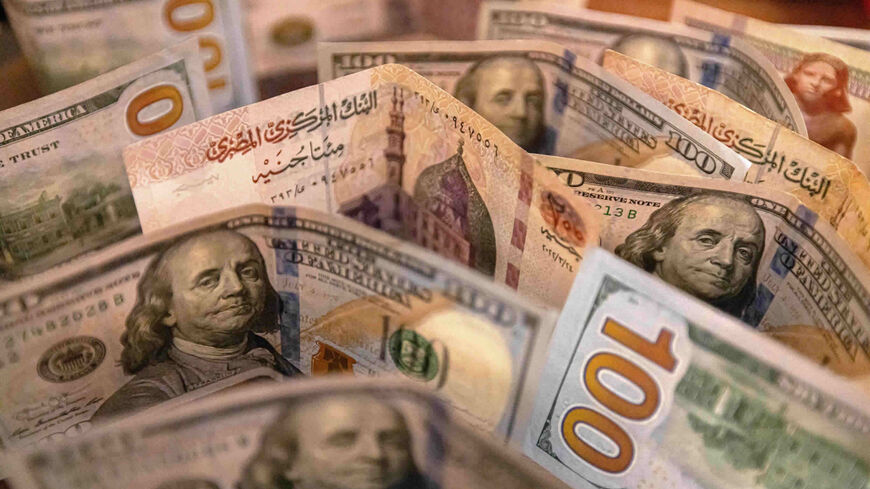 The Egyptian pound and US dollar banknotes are seen in this photo taken on Aug. 25, 2022. - Khaled Desouki/AFP via Getty Images

CAIRO — Speculation is rife over the future of a burgeoning parallel foreign currency market, after the Central Bank of Egypt (CBE) ended a managed exchange rate regime, allowing the Egyptian pound to trade freely against foreign currencies, for the second time in six years.

Apart from liberalizing the pound Oct. 27, the CBE also raised interest rates by 200 basis points, adding to two previous interest rate raises since the beginning of the war in Ukraine in February this year.

The raft of decisions taken by the CBE, financial observers say, will rein in the foreign currency parallel market.

"They will partially achieve this, especially with the rate inside the banks coming close to the one outside them," Khaled al-Shafie, head of local think tank Capital Center for Economic Studies, told Al-Monitor. People will continue to resort to the black market.

The foreign currency black market thrived across Egypt over the past months, with local banks failing to secure the US dollars needed for import operations.

Most dollar exchange operations happen on the streets and on social media, as importers and those needing greenbacks for travel or to pay study fees seek to obtain them outside of the banking system.

The dollars in Egypt's coffers came under intense pressure after the eruption of Russia's war on Ukraine, which caused international cereal and legume prices to rise, thus forcing Egypt, among the world's largest wheat importers, to pay more for its imports.

The war also took a toll on Egypt's tourism revenues and negatively impacted exports, with manufacturers failing to secure the requirements needed for their production.

"The war has had negative effects on the national economy by draining foreign currency reserves and slowing production down," Mohamed Abdel Hamid, member of the Economic Committee in the House of Deputies (lower chamber of parliament), told Al-Monitor.

Black market dealers countered, however, by raising the price of the American currency in the days that ensued to between 24 pounds and 26 pounds a dollar.

The flotation came only hours before the CBE announced the signing of a $3 billion loan deal with the International Monetary Fund.

Egypt says it will use this money to buy its needs from the international market and refueling its economic development plans.

It also hopes that the same measure will eradicate the foreign currency black market, especially when US dollar hoarders exchange their greenbacks and invest in the national currency.

Some of the nation's banks have already declared new saving and investment schemes, including investment certificates with an annual interest rate of 17.25%.

The banks have already raised the interest rate on US dollar saving certificates by 100% — to 5%, from 2.50% earlier.

This comes as goods continue to accumulate in the nation's ports, failing to gain entry into Egypt, with the banks failing to provide the dollars necessary for their release.

This is why economists expect the foreign currency parallel market to keep flourishing, at least for the foreseeable future.

"This will happen until there is a fresh supply of dollars to Egypt, one that makes the banks capable of meeting the demand for the US currency," Shafie said. "Leaving the exchange rate to be decided by the supply and demand mechanism will eradicate the black market that poses dangers to the economy."