The pound flotation has lifted Egypt’s foreign reserves to an all-time high topping $45.117 billion at the end of September, and to maintain the reserves at historic record highs, economists urge the government to boost local industrialization. 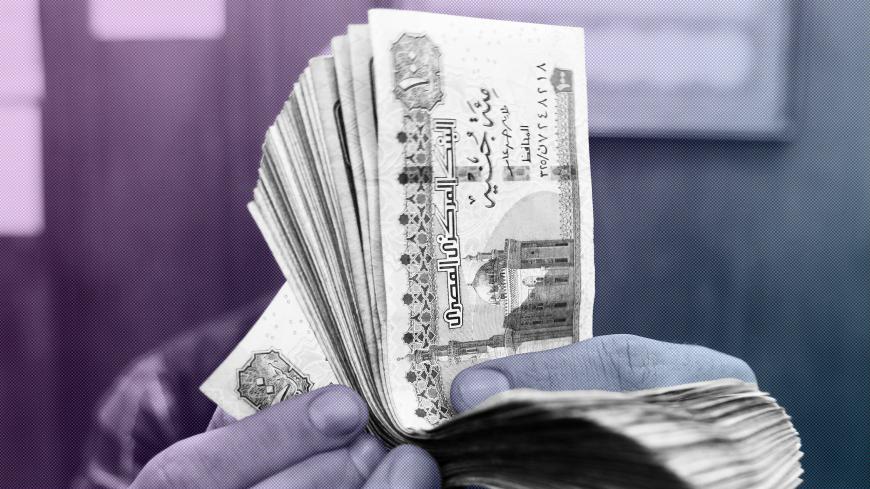 In September, the country’s international reserves rose by $149 million from $44.969 billion in August, according to the CBE. Economists say the floating pound has been a radical turnaround as the Egyptian financial and monetary authorities have launched a raft of economic reforms since November 2016.

“The currency float has triggered a series of reforms, of which the foreign exchange rate has been the cornerstone driver. Egypt’s four strategic hard currency resources have been on the rise since the pound flotation in 2016,” Rashad Abdo, head of the Egyptian Forum for Economic and Strategic Studies, told Al-Monitor.

The CBE floated the pound on Nov. 3, 2016. The move was accompanied by a $12 billion loan program signed with the International Monetary Fund.

“Revenues from the Suez Canal rose to $5.6 billion in 2018 from $5.2 billion a year ago. Exports, tourist arrivals and remittances of Egyptian expatriates also surged after the currency float,” Abdo said, noting that the pound flotation has eradicated a foreign exchange black market that impacted the country’s business environment.

Revenue from the Suez Canal rose to $5.73 billion at the end of fiscal year 2019, which ended on June 30, the Ministry of Planning said in an Oct. 6 statement.

However, remittances of Egyptian expatriates fell to $25.15 billion in fiscal 2019, down from $26.39 billion in fiscal 2018, according to a CBE statement on Sept. 30. The country’s revenue from tourism almost doubled to $11.4 billion in 2018, compared to $7.6 billion the previous year, Al-Borsa news portal reported April 7.

“The depreciation of the pound has slashed the cost of production in Egypt, lifting exports and local investment as the cost of capital fell. This has boosted both exports and tourist arrivals,” Abdo said.

Tourist arrivals rose to 8.3 million in 2017, up from 5.4 million in 2016, data from the state-run Central Agency for Public Mobilization and Statistics (CAPMAS) showed.

“Egypt’s macroeconomic indicators have improved since late 2016. The monetary policy has helped the pound gain versus the US dollar,” Abdo noted, forecasting more inflows in the coming years as the pace of economic growth gains momentum. “Revenues from economic zones in the Suez Canal may reach as high as $60 billion by 2022. The foreign reserves will increase as the bill of imports decline as Egypt relies more and more on local fuel resources decreasing fuel.”

Local and foreign investments injected in the Suez Canal Economic Zone (SCZone) totaled $45 billion, between 2014 and 2019, in 192 projects on an area of 460 square kilometers (178 square miles). The new facility is planned to open the door for SCZone factories to export to Europe, Africa and other parts of the world via seaports within the Suez Canal Area Development Projects, i.e., Ain Sokhna, Adabiya, El Tor, West Port Said Port and el-Arish.

Mostafa el-Fiky, senior treasurer and head of planning and financial analysis at oil and energy company Saipem Egypt, agrees with Abdo that the currency float “has been the reform’s main driver in Egypt.

“Prior to the flotation, the business environment was in the grip of a black market. The flotation was a must to have a single foreign exchange rate,” Fiky told Al-Monitor, stressing that the foreign reserves would not have reached that level without the flotation.

“Falling fuel imports have also played a role with the Zohr gas field and other discoveries beginning production. Fuel imports used to cost the Egyptian government around $60 million monthly. The oil and gas discoveries have eased pressures on the country’s outflows of hard currency,” he said.

In September, CAPMAS reported that Egypt’s petroleum exports jumped 56% to $2.332 billion in the first half of 2019, compared to $1.495 billion in the same period a year earlier.

As for how rising international reserves would strengthen the pound, Fiky explained that the foreign exchange rate depends on the market mechanism, which is demand and supply. “However, the fair value of the US currency should be between 12 and 14 pounds on the local market.”

The greenback stood at 16.24 versus the Egyptian pound on Oct. 3, according to CBE data.