Analysts study the sharp decline of Egypt’s foreign reserves due to the economic slowdown caused by the coronavirus pandemic, with fears that the Egyptian pound would further weaken against the dollar. 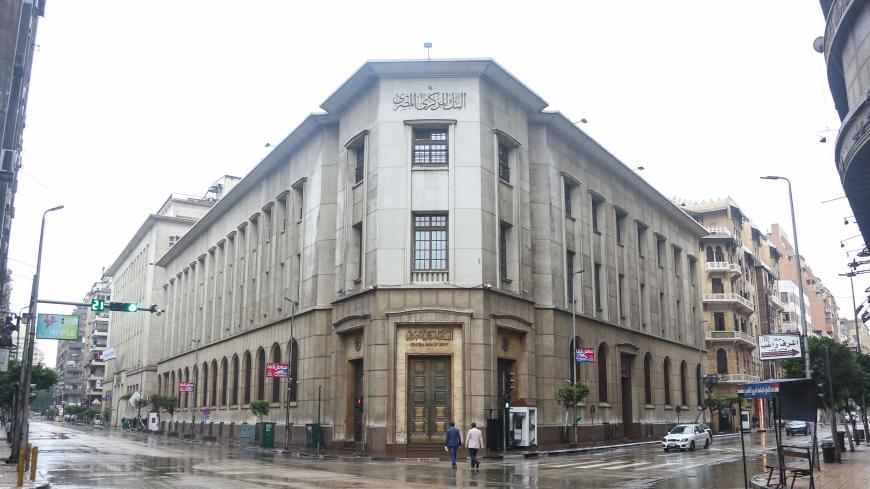 The Central Bank of Egypt is seen in Cairo, Egypt, March 12, 2020. - Islam Safwat/NurPhoto via Getty Images

Egypt’s foreign reserves fell by $5.4 billion, or 9.7%, to $40.1 billion at the end of March, a Central Bank of Egypt statement said on April 7. The central bank ascribed the decline to what it described as “an unprecedented blow to the global financial markets arising from the coronavirus epidemic spread, which resulted in the sharpest portfolio flows reversal on record from emerging markets, including the Egyptian market.”

“The central bank has utilized $5.4 billion from its net international reserves balances during March, to partially cover foreign portfolio investment outflows through the central bank’s foreign exchange repatriation mechanism and accommodate for the domestic market’s foreign currency needs to import strategic goods, as well as for the repayment of external debt service obligations,” the central bank said on its website.

Despite the decline, the central bank said that the current position of reserves remains strong, noting that it covers around eight months of Egypt’s imports.

As a result, Egypt’s economy may shrink to 3.5% of gross domestic product (GDP) this year, down from a previously expected 5.5%, on the back of the coronavirus pandemic, Alia el-Mahdi, a professor of economics at Cairo University, told Al-Monitor.

She said that Egypt was expected to earn roughly $16 billion from tourism in 2020 prior to the coronavirus crisis, pointing out that the virus that causes COVID-19 has dealt a direct blow to the aviation and travel industries.

“On the one hand, revenues from Egypt’s hard currency earners have declined in March. Falling oil prices have impacted revenues from the Suez Canal and remittances from Egyptian expatriates. There have been no tourist arrivals since the flight suspension started on March 19,” she said.

Mahdi stressed that the decline was an outcome of “an exceptional circumstance” gripping the whole world, including Egypt. The net international reserves rose by $53 million to $45.51 billion at the end of February, according to central bank data.

The country’s foreign reserves have been on the rise since the currency float in November 2016. The pound flotation was accompanied by a $12 billion loan program signed with the International Monetary Fund.

“On the other hand, Egypt’s exports also fell as the world economy is shrinking on the back of restrictive measures by many countries across the world. Tourism, Suez Canal [revenues], remittances from Egyptian expats and exports account for 20% of Egypt’s GDP,” Mahdi added.

As for the economic consequences in the short and medium terms, she said it all depends on how long the crisis would last, citing that the partial lockdown has already caused a slump.

“It is very hard to predict. There are three scenarios. According to the first one, the crisis will end by the end of June. In this case, the economic slowdown will be short-lived. In another scenario, the coronavirus crisis may last until the end of September; the slump would be more serious. A longer crisis would lead to a global recession,” she noted.

Prime Minister Moustafa Madbouly extended on April 8 a night-time curfew, which has been in effect since March 25, for two weeks ending April 23.

“Unemployment may rise by 2% with the partial lockdown impacting the business climate. The lockdown is a tough move to accept due to its high economic price,” Mahdi said.

The jobless rate fell to 8% in the fourth quarter of 2019, down from 8.9% in the same quarter a year earlier, according to the state-run Central Agency for Public Mobilization and Statistics.

On April 6, Minister of Planning and Economic Development Hala el-Said said that the economic growth would fall to 4.2% of GDP, down from 5.6% as previously forecast, by the end of fiscal year 2020, which began on July 1.

Cairo-based investment bank HC Securities & Investment said April 11 that the coronavirus would be contained by June, forecasting that revenue from tourism would fall by 16% to $10.6 billion, year-on-year, in fiscal 2020.

Ziad Bahaa ElDin, former deputy prime minister for economic affairs, was quoted by Youm7 news portal on April 12 as saying that Egypt’s economy would withstand the coronavirus outbreak in view of its high growth over the past few years.

“Business activities are still ongoing, and the economy will carry on despite the crisis,” he said.

Radwa El-Swaify, head of research at the Cairo-based investment bank Pharos, was quoted by RT on April 3 as saying that the Egyptian pound would weaken versus the US dollar, citing the global economic turmoil.

Swaify forecast the greenback to strengthen to 16-17 Egyptian pounds, up from 15.75 pounds at present.

The US dollar stood at 15.79 pounds on April 12, according to the central bank’s website.