Unlike during previous wars in the Gaza Strip, Egypt — distracted by its own internal affairs — is isolated politically while its Gazan neighbors across the border in Rafah find themselves in a dire situation. 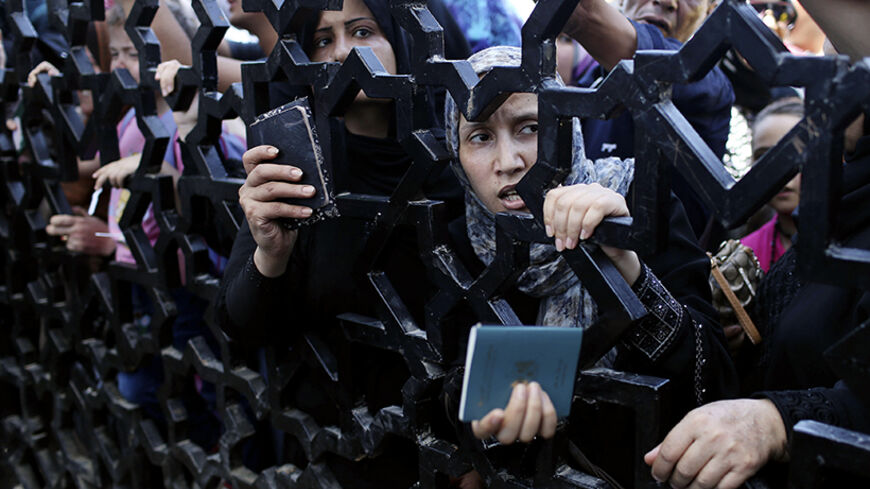 Palestinians standing behind the gate of the Rafah crossing hold their passports as they try to cross into Egypt, July 10, 2014. - REUTERS/Ibraheem Abu Mustafa

CAIRO — On Aug. 1, Egypt decided to fully shut down the Rafah border crossing into the Gaza Strip as Israeli air force, navy and ground artillery pounded Rafah on the Palestinian side a few hundred yards away, in the aftermath of another kidnapping operation executed by Palestinian resistance factions. Among those stranded under fire were Egyptians, Westerners and helpless Palestinian victims of the inhumane Israeli shelling.

On the same day but a few thousand miles to the west, the Tunisian authorities decided not only to shut down the Ras Ajdir border crossing in the face of thousands of Egyptians and other nationalities fleeing Libya's deadly strife, but fended them off using tear gas and warning shots. Several Egyptians were killed amid the stampede and random Libyan fire at the border.

Egypt finally opened the Rafah terminal on Aug. 2 and allowed some of those stranded to cross, while Tunisia cooperated with Egyptian authorities to organize an evacuation fleet from Djerba-Zarzis International Airport for those stranded, but never actually allowed them into Tunisia.

The scenes were staggeringly similar. Regardless of names and coordinates, it was simply a crossing point with innocent victims stranded on the deadly side while a capable regime watches with a smirk and a deck of political cards from the relatively safe side. Well, what goes around comes around, almost instantly.

Both the Egyptian-Gazan and the Tunisian-Egyptian situations were interpreted as another phase of Egypt's growing political isolation since the war kicked off in Gaza. But the overall losses of this war — taking place on Egypt's eastern border and shattering the windows of residents in the Sinai Peninsula — will go way beyond politics.

Hassan Nafaa, Cairo University's outspoken political science professor told, Al-Monitor, "Egypt's interaction [with the war in Gaza] wasn’t up to the expectations of both Egyptians and the region."

"The domestic war between the Egyptian regime and the Muslim Brotherhood, in addition to seeing this war as an opportunity to weaken Hamas, has clouded its vision and reaction. Despite being the only mediator and the sponsor of the only initiative, Egypt somehow continues to stand neutrally between the Palestinian victims and the Israeli aggressors."

"Egypt is facing serious political, national security and economic challenges on the domestic front, but its substandard reaction will harm its regional abilities," Nafaa told Al-Monitor.

Besides harming its already unstable regional role, Egypt will also be facing grave repercussions of the devastation and humanitarian crisis in Gaza.

Since Ariel Sharon's withdrawal from Gaza in 2005, Egypt has been paying dearly for Israel's stifling blockade and different wars against the Gaza Strip. Up until 2013, Gaza and its 1.8 million population have grown dependent on the only source of life and window to the outside world: Egypt's Sinai Peninsula and its massive smuggling networks. But since Egypt's military campaign destroyed the vast majority of the underground tunnels and choked the smuggling routes across the northern part of Sinai, Gaza quickly ran through its strategic reserve of fuel, construction material, medical supplies and consumer goods, a reserve it only managed to accumulate through an unprecedented surge in smuggling following the Egyptian 2011 revolution.

The minimal remainder of that strategic reserve — after Egypt's military clampdown across Sinai — was devoured by the ongoing war along with a great portion of the weapons of Hamas and other factions. And depending on when the war comes to an end, the Gaza Strip will be, after bombing the only power plant, a massive blacked-out field of debris in dire need of billions of dollars in rescue and reconstruction budgets and operations.

The only routes for such resources are Israel, a brutal military force that aims to turn Gaza into a lifeless stretch, and Egypt, a sour neighbor that is unwittingly settling political balances at the expense of a looming humanitarian, economic and security crisis that it will eventually, and as always, pay the lion's share of its bill.

The mind-boggling fact is that Egypt seems to be dealing with this mess as if it is unprecedented, as if it never walked through this Israeli-made crisis several times before. January 2008 was the unlearned lesson since Hamas' takeover of the Gaza Strip over the bleeding bodies of the Palestinian Authority's (PA) also not so popular men.

Six months after Israel applied a full blockade on Gaza in June 2007 and followed by Egypt's total shutdown of the Rafah terminal, a few militants blew a hole in the border fence prompting hundreds of thousands of desperate Palestinians to boldly cross into Egypt seeking all sorts of life necessities. Back then, Gaza was suffering an unprecedented crisis that literally led vehicles to run on a locally made mixture of frying oil and acetone while inflating the prices of donkeys and horses that became a more efficient means of transport than gas-less vehicles.

Back then, Egypt's Hosni Mubarak, his late intelligence chief Omar Suleiman and his now-retired officers who single-handedly controlled the Israeli and Palestinian files within Egypt's various institutions efficiently handled what could have turned into a bloodbath on Egyptian soil, and within a few weeks, Palestinians were back in the Gaza Strip and the fence rebuilt.

"To avoid a repetition of such a crisis, Egypt and the world have to pressure for the blockade to be lifted," said Nafaa, who agrees that Egypt's role is not only to help "our fellow Palestinians, but to pass long-term solutions to regional crises."

But in case of failing to avoid a repetition of such an unfortunate scene, what will Egypt do? Will it listen to its hate-mongering media and mass murder hungry and desperate Palestinians? Even if they were illegally infiltrating its borders. I personally don't think that Egypt's regime will commit such political suicide, but I also don't think it will handle it as peacefully and intelligently as Mubarak and Suleiman did in 2008.

Nafaa said, "Despite the media frenzy and hate speech against Hamas, the Egyptian people and political elite fully understand the extent of Egypt's obligation toward Gaza, which is a top Egyptian national security matter.

"Egypt's regime has to understand the undeniable success of the resistance factions that led to new opportunities. Egypt's regime should be more politically intelligent, fully open the Rafah border and powerfully pressure Israel to open its borders with Gaza as well."

Egypt's manipulation of the Hamas-ruled Gaza Strip was politically cunning since Hamas' bloody takeover in 2007, and despite a few disruptive incidents, the situation has always been under control until 2013 when Egypt's military masterminds decided that neither Hamas nor its mother organization, the Muslim Brotherhood, are viable players.

This war has clearly shown Hamas, Egypt and the world that Hamas is not the only player, neither are they the most popular in Gaza any longer — they are one voice among several powerful, popular and active others.

"The unity this war struck between various Palestinian factions, including Ramallah's PA, is a major success that should be endorsed and capitalized on," Nafaa said.

For the first time in almost a decade, the Palestinian delegation to Cairo — which is so far boycotted by Israel — involved much more than just Hamas and the PA, which both have not appeared at the same conference for well over a year.

But the question remains: Will Egypt handle this war as intelligently as it did before 2013? Or will it squander the opportunities over its dispute with the already bunkering-underground Hamas?