Has Egypt turned the page on discord with Hamas?

Egypt’s relations with Hamas have begun to warm up in recent months after years of tension following the 2013 overthrow of Muslim Brotherhood President Mohammed Morsi. 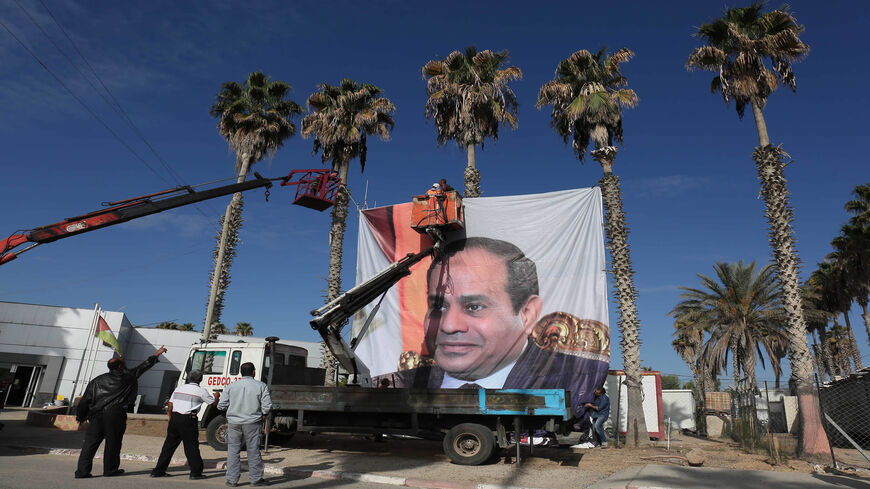 A portrait of Egyptian President Abdel Fattah al-Sisi is seen at the Rafah border crossing with Egypt, Nov. 1, 2017. - Said Khatib/AFP via Getty Images

Egypt’s diplomatic efforts resulted in a cease-fire agreement May 21 between Hamas and Israel. The deal, coordinated with the United States, ended 11 days of fighting that killed hundreds of Palestinians and 13 Israelis.

During the conflict, Egypt lent strong political support to the Palestinians, with President Abdel Fattah al-Sisi calling for pressure on Israel to halt its military escalation in the Palestinian territories and reach a deal to establish an independent Palestinian state.

Sisi pledged $500 million for the reconstruction of the Gaza Strip, which is ruled by Hamas, following the Israeli blitz. The Egyptian leader also ordered May 20 the dispatch of two security delegations to Gaza and Israel in an effort to bolster the cease-fire between the two sides and secure long-term calm.

Moreover, the Egyptian government sent a massive aid convoy of 130 trucks ladened with aid supplies to Gaza and reopened the Rafah border crossing, which links Egypt’s Sinai Peninsula with the Palestinian territory, to allow the entry of injured Palestinians to receive medical treatment at Egyptian hospitals and ensure a smooth transfer of aid to the Palestinians.

What drew attention during the conflict was the change of tone in the state media discourse on Hamas, with most newspapers terming the Islamist group and other armed factions as resistance movements and Israel as occupiers. This was a major shift from the previous negative coverage of Hamas in state media, which had accused the Palestinian group of harming Egypt’s national security and of being an affiliate of the Muslim Brotherhood group, which Cairo blacklisted in 2013.

Emad El-Din Hussein, editor-in chief of Al-Shorouk newspaper, said in televised statements with the state-run television that the Egyptian government has put aside its differences with Hamas. “Egypt has sponsored the Palestinian cause since the inter-Palestinian rift in 2007,” he said.

Egypt’s relations with Hamas took a nosedive in 2013 after the Egyptian army deposed Muslim Brotherhood President Mohammed Morsi. At that time, Egyptian authorities accused Hamas of taking part in a major jailbreak by Brotherhood members during the 2011 uprising that ousted former President Hosni Mubarak.

In 2015, an Egyptian court blacklisted Hamas and its armed wing on accusations of taking part in terrorist acts in Egypt. State media also accused Hamas of involvement in attacks by Islamic State-linked militants in Sinai, which shares a border with Gaza. Hamas has frequently denied any role in the unrest, affirming that it has never interfered in Egypt’s internal affairs.

The relationship between Egypt and Hamas, however, began to warm up in 2017 following a visit by Hamas political chief Ismail Haniyeh to Cairo for talks with Egyptian officials. Following this visit, Cairo began to sponsor dialogue among Palestinian factions to heal the inter-Palestinian rift caused by Hamas’ seizure of the Gaza Strip from the Ramallah-based Palestinian Authority (PA) in 2007.

In a sign of improving relations with Cairo, Haniyeh came out in a major rally in the Qatari capital, Doha, May 21 to thank Egypt for its strong support to the Palestinians and for the Egyptian role in brokering the cease-fire to end Israeli attacks in Gaza.

Haniyeh is scheduled to visit Cairo within days for talks with Egyptian officials on solidifying the cease-fire with Israel and the rebuilding of the Gaza Strip. The news of Haniyeh’s visit comes as US Secretary of State Antony Blinken arrived in Cairo May 26 as part of a Middle East tour for talks with Egyptian officials on cementing the Gaza cease-fire and rebuilding the enclave.

Blinken held talks with Sisi upon arrival before attending an event at the US Embassy in Cairo, where he said Washington and Cairo were working together to let Israelis and Palestinians live in safety and security. He also described Egypt as a “real and effective partner” in dealing with the latest violence between Israel and Palestinians.

Last week, Sisi spoke to US President Joe Biden twice — before and after the Gaza cease-fire was announced.

On May 25, Blinken pledged an additional $75 million in development and economic aid to the Palestinians in 2021, $5.5 million in immediate disaster relief for Gaza and $32 million to the UN refugee agency UNRWA based there.

Blinken, speaking following talks with PA President Mahmoud Abbas, said rebuilding Gaza and improving economic conditions for its people will weaken Hamas. “If we do this right, reconstruction and then relief for the people of Gaza — far from empowering Hamas — has the potential to undermine it,” he said. “Hamas thrives, unfortunately, on despair, on misery, on desperation, on a lack of opportunity.”

The chief diplomat said Washington seeks to “give the Palestinian people, including those in Gaza, a renewed sense of confidence, of optimism, of real opportunity. If we are able to do that together, then Hamas’ foothold in Gaza will slip. We know that, and I think Hamas knows that.”

Ahmed al-Awady, head of the parliamentary Committee on Defense and National Security, said Cairo has overcome its differences with Hamas for the sake of protecting the legitimate rights of the Palestinian people.

“The Palestinian issue remains Egypt’s main cause regardless of the relationship with Hamas,” Awady told Al-Monitor by phone. “Egypt is keen on maintaining the rights of the Palestinian people and establishing their independent Palestinian state.”

The parliamentarian blamed the Muslim Brotherhood for the tension that has marred Egypt’s relations with Hamas since 2013. “Despite this tension, Egypt provided strong support to the Palestinians and defended them and their holy sites against the Israeli aggression.

Awady noted, “There might be some minor differences with Hamas, but the two sides put aside these disagreements during the time of crises in the hope of achieving the interests of the Palestinian people, who are living under Israeli occupation.”

Khaled Okasha, director of the Egyptian Center for Strategic Studies, said Egypt has a decadeslong relationship with the Palestinians irrespective of Hamas.

“Egypt is keen on sparing the Palestinian civilians any form of suffering and losses and this position has nothing to do with the relationship with Hamas,” Okasha told Al-Monitor.

Okasha said relations have improved between Egypt and Hamas in recent months, which was evident in Hamas’ agreeing to run in the Palestinian legislative elections on May 22 during the inter-Palestinian dialogue hosted by Egypt. The polls were later postponed by Abbas, citing Israel’s refusal to hold the vote in Jerusalem.

“The situation, however, could change at any time if Hamas commits any act that could disturb Cairo,” he said. “The Egyptian performance during the Gaza crisis reflects Egypt’s keenness to secure long-term calm to spare the Palestinians any new Israeli attacks, and Egypt has a vision for reaching a peace deal to preserve the legitimate Palestinian rights.”