Turkish Foreign Minister Mevlut Cavusoglu suggested cooperation between Ankara and Cairo on the Palestinian issue, a move seen unlikely as Cairo looks with suspicion at the Turkish role in the Palestinian territories, particularly the Gaza Strip. 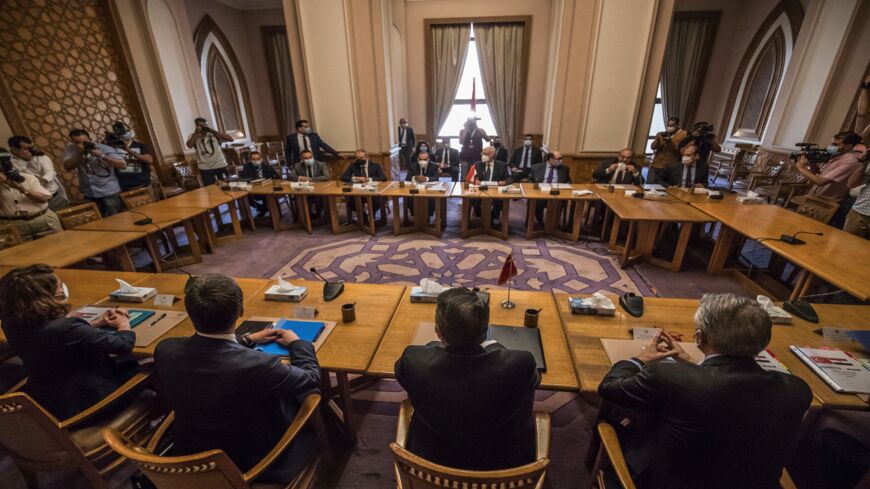 In the latest effort by Turkey to woo Egypt after years of political tension, Turkish Foreign Minister Mevlut Cavusoglu suggested on June 10 that Ankara and Cairo cooperate together on the Palestinian issue.

Cavusoglu told state television that his country’s relations with Egypt were improving, adding that talks between the two sides could develop with a meeting of the Turkish and Egyptian foreign ministers and the mutual appointment of ambassadors.

“If our relations with Egypt normalize, there are many countries that we can cooperate with, which need this cooperation,” he said.

The Turkish statements came almost three weeks after Egypt, in cooperation with the United States, managed to broker a cease-fire that ended 11 days of fighting between Israel and Palestinian armed groups in the Gaza Strip.

During the Gaza conflict, Turkey’s diplomatic isolation was evident. Turkish President Recep Tayyip Erdogan made a flurry of phone calls with regional leaders in an effort to halt the Israeli offensive, but his contacts failed to bear any result on the ground. Erdogan also came under fire from Washington, which accused the Turkish leader of making “anti-Semitic” remarks.

On the contrary, Egypt won praise from the US administration for its active diplomacy that resulted in a cease-fire deal between Israel and the Palestinian group Hamas, which rules the Gaza Strip.

Cairo also pledged $500 million for Gaza rebuilding following the Israeli blitz and opened its border to provide medical treatment to Palestinians injured during the conflict that caused the death of more than 250 people. Egyptian officials have also been shuttling between Palestinians and Israel in an effort to secure a long-term calm.

Tarek Fahmy, a professor of political sciences at Cairo University and director of the Israeli-Palestinian Studies Unit at the National Center for Middle East Studies, rules out any cooperation between Egypt and Turkey on the Palestinian issue, citing that Cairo looks with suspicion at the Turkish role in the Palestinian territories, particularly in the Gaza Strip.

Speaking to Al-Monitor over the phone, Fahmy said issues of the Eastern Mediterranean, Libya and Syria could be fields of cooperation between Egypt and Turkey. “But cooperation between the two sides on the Palestinian issue is unlikely since this file has a particular importance to Egypt,” he said. “The Turks don’t have a strong presence in the Palestinian territories, except in East Jerusalem.”

Fahmy said unlike Egypt, the Turks don’t have the experience of dealing with the Palestinian factions. “The factions themselves will not easily give their trust to Turkey in spite of the strong relationship between Hamas and Islamic Jihad groups with Ankara.”

In September, Turkey hosted talks between rival Palestinian groups Hamas and Fatah to heal their rift triggered by Hamas’ seizure of the Gaza Strip by force in 2007. Although the Turkey-hosted talks were met with silence from Cairo, the state media close to the authorities decried the move as a Turkish attempt to hijack the issue of Palestinian reconciliation from Egypt, which has been sponsoring this file for years. The media also accused Hamas of implementing Turkey’s plan to control the West Bank through its sponsorship of the Palestinian reconciliation.

Egyptian authorities were also alarmed by Palestinian and Turkish statements about the possibility of delimitating their maritime border and cooperation on natural resources in the Eastern Mediterranean.

“We are open for every idea to deepen our relations with Turkey, and this includes a deal on exclusive economic zones,” Palestinian Ambassador in Ankara Faed Mustafa told the Aydinlik newspaper. “We also have rights in the Mediterranean. Palestine has shares in oil and gas located in the Eastern Mediterranean. We are ready to cooperate in these areas and sign a deal.”

The proposal was renewed by professor Cihat Yaycı, a former Turkish navy rear admiral and head of the Maritime and Global Strategies Center at Bahcesehir University, who called for signing a maritime jurisdiction agreement between Turkey and the Palestinians similar to the deal signed between Turkey and Libya.

“Egypt should not react against it because the agreement does not interfere with the maritime jurisdiction zone it specified in the agreement with the Greek Cypriot administration (Cyprus),” Yaycı said, arguing that the Turkish-Palestinian deal would give Egypt more jurisdiction over the area claimed by Cyprus.

Hamas political chief Ismail Haniyeh also signaled support to the idea of demarcating the Palestinian-Turkish maritime border. “Turkey’s rights in the Eastern Mediterranean can of course not be opened to discussion. All policies prioritizing Turkey’s own interests and security are its right. At the same time, when we consider that the Palestinian state is also a country with a shore on the Eastern Mediterranean, it has the same rights.”

But Fahmy downplays the importance of the idea, citing that it came as a response to the United Arab Emirates (UAE) joining the Cairo-based East-Med Gas Forum.

“This proposal was part of quarreling with the UAE, and the implementation of this proposal is totally ruled out,” Fahmy said. “As for Egypt, the Egyptian leadership has a clear position that it will not delimitate the country’s maritime border with the Gaza Strip since the enclave is not yet an independent country.”

Egypt’s relations with Turkey nosedived in 2013 following the overthrow of Muslim Brotherhood President Mohammed Morsi. Turkey has provided refuge to hundreds of members of the Islamist movement, which Cairo blacklisted as a terrorist group in 2013.

But Turkey began in recent months to push to repair its fractured relations with Egypt, sending a delegation to Cairo in early May for the first direct talks between the two regional rivals in years to explore ways of normalizing their ties.

Cairo and Ankara are at odds over a host of regional issues, including Libya where Turkey sent military forces and mercenaries to support the former Government of National Accord in Tripoli against the Libyan National Army of Khalifa Hifter, who is backed by Egypt. Other issues of dispute include the Muslim Brotherhood, Syria and the Eastern Mediterranean.

Egyptian Foreign Minister Sameh Shoukry said on June 12 that Egypt is still assessing the Turkish policies. “Egypt is working on exploring how Ankara is ready to have relations with Cairo on a proper basis and its compliance with international law,” he told the local Sada Al-Balad TV channel.

The top diplomat noted that if Turkey did not extradite Muslim Brotherhood members to Egypt or close Brotherhood-affiliated TV channels, the situation would be more difficult. “All these policies are being monitored, and ties could be normally resumed in case of any progress,” Shoukry said.