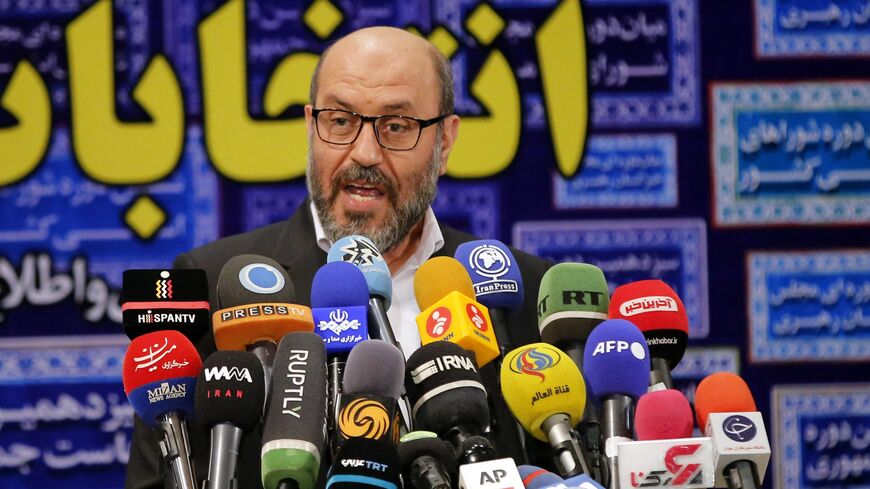 Former Iranian Defense Minister Hossein Dehghan, 64, speaks during a press conference after registering his candidacy for Iran's presidential elections at the Interior Ministry in Tehran on May 11, 2021. Registration at the Interior Ministry to contest the poll runs from May 11-15, with names to be handed to the conservative-dominated Guardian Council for vetting before being allowed to run. - ATTA KENARE/AFP via Getty Images

In his first address as the registration process for Iran’s presidential election kicked off, Iranian Supreme Leader Ayatollah Ali Khamenei outlined desirable traits of the next administration in Iran.

In the televised address, Khamenei clarified previous remarks he had made about the next administration being “young.” He said that he did not mean a Cabinet made up of people in their low- to mid-30s and that it was important to learn from individuals who have more experience. He said that in each Cabinet, there are hundreds of managerial positions that could utilize “revolutionary and pious youth.”

Khamenei’s recognition of the need to bring in a younger generation of administrative staff working under more experienced ministers is in line with his Second Step of the Revolution, which is based on a statement made in 2019. The presidential Cabinet oversees a sprawling bureaucracy and installing younger individuals who are committed to the revolutionary ideals would create a new managerial class in the country.

In his speech, Khamenei acknowledged that “transformation is necessary” in the country. He said he understands that the current managerial elite in the country is likely unwilling or even unable to create such a transformation in the country, especially when it comes to rooting out corruption, which is one of the issues that Khamenei wants addressed in  the next administration.

Iran’s presidential election takes place June 18. Presidential candidates are now officially registering their names. On May 11, the two most prominent names to register were Saeed Mohammad and Hossein Dehghan. Mohammad is a general in the Islamic Revolutionary Guard Corps (IRGC) and former commander of Khatam al-Anbiya Construction Headquarters, which loosely started out as similar to Army Corps of Engineers but is now a major economic powerhouse in the country. Dehghan is a former IRGC air force officer and former defense minister under President Hassan Rouhani. Dehghan is 64 and Mohammad is 53.

On Wednesday, the biggest name to register was former President Mahmoud Ahmadinejad, who is 64. His election registration was accompanied by the same populist and crowd-pleasing gestures of his presidency. While Ahmadinejad had the full support of the non-elected bodies of the state during the protests against his 2009 reelection, his closest allies have faced criminal charges of corruption, which is often the case in Iran after a president leaves office.

Three more prominent names expected to announce or reject a candidacy are former parliament speaker Ali Larijani, 63, judiciary chief Ayatollah Ebrahim Raisi, 60, and Foreign Minister Mohammad Javad Zarif, 61. A source told Mehr News Agency that Larijani would register this week. Larijani had moved from a conservative to a moderate position under the presidency of Rouhani and collaborated with him on a number of issues. Raisi, who lost in the 2017 election to Rouhani and is still rumored to be a potential replacement for Khamenei, is also expected to register, according to people close to him. Zarif has repeatedly denied he wants to run. He recently met with former Reformist President Mohammad Khatami and influential cleric Hassan Khomeini to inform them that he will not be running.