Iran's Supreme Leader Ayatollah Ali Khamenei has appointed Mohammad Bagheri as the new chief of staff of the Armed Forces. 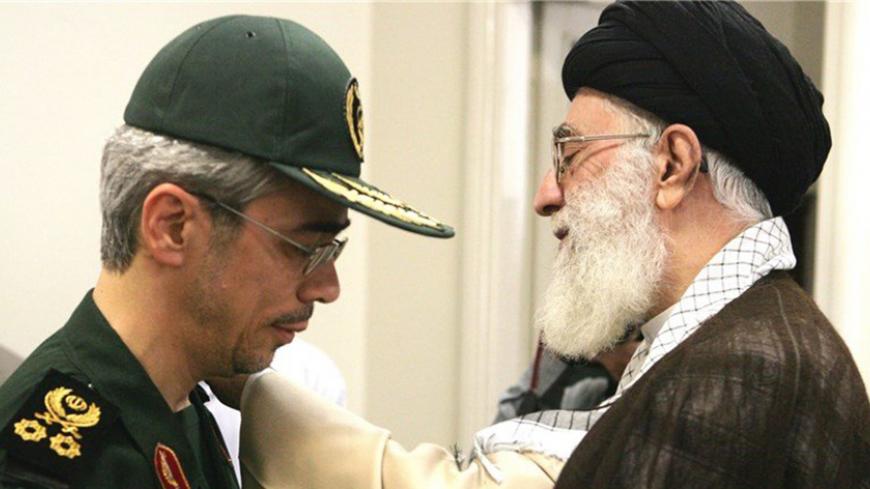 Iranian Supreme Leader Ayatollah Ali Khamenei has appointed Mohammad Bagheri as the chief of staff of the Iranian Armed Forces, replacing Hassan Firouzabadi, who held the position for 27 years. Firouzabadi, an outspoken military commander who in recent years has been supportive of President Hassan Rouhani’s diplomatic efforts, will serve as an adviser to Khamenei, who is commander in chief of the armed forces.

Before his June 28 appointment, Maj. Gen. Bagheri, whose real last name is Afshordi, was not known as a high-profile personality in Iranian media. Bagheri joined the Islamic Revolutionary Guard Corps (IRGC) in 1980 and eventually became one of the senior intelligence operational commanders of the Iran-Iraq War. Bagheri was serving as the deputy of intelligence and operations of the armed forces before his appointment. His brother, Hassan Bagheri, former deputy head of ground forces of the IRGC who died in 1983, was one of the famous commanders of the Iran-Iraq War and played an important role in the liberation of Khorramshahr.

“With consideration of your valuable experience during the Sacred Defense [Iran-Iraq War] and your responsibilities at the armed forces and Khatam al-Anbiya [IRGC engineering conglomerate], I appoint you as chief of staff of the armed forces,” Khamenei’s order read, which was shared by Iranian media.

Tasnim News Agency republished an older interview with Bagheri that was conducted when he was deputy of the armed forces. In a reference to his low profile in the media, particularly compared with the profile and name recognition of his brother, Bagheri said, “I don’t see myself as a significant person in order to be seen. It is natural that martyr Hassan Bagheri and other martyrs like him had this greatness, with their shadow cast over me and people like me.” Alluding to his work in intelligence, he added, “Of course, my work and employment is such that I have less opportunity for the media, and I am not inclined to have a presence in the public.”

On Iran’s security in the region, especially with respect to the rise of the Islamic State terrorist group, which has a presence on both sides of Iran’s borders, Bagheri said Iran’s security position is the best it has been in Islamic Republic history. He said there was a time that Iraqi troops had occupied parts of Iranian territory and a time when the United States invaded Iraq in 2003 in which many people felt that Iran would be next. However, now there is no threat of such land invasions at the moment, Bagheri said.

On the origins of the intelligence operations of the armed forces, Bagheri said that after the Iraqi invasion and occupation of southwest Iran, many Iranians from all across the country volunteered. However, these forces did not know the terrain of that part of Iran nor did they have an understanding of the forces they were fighting, and it was necessary to set up intelligence units in order to study them.

When asked to compare Khamenei’s management of the armed forces to that of former Supreme Leader Ayatollah Ruhollah Khomeini, Bagheri described Khamenei as being directly involved in all of the military decisions. He said that Khamenei, due to his position as president before becoming supreme leader, has a firm understanding of managing the country and of the armed forces and has direct communication with all of the commanders.

Bagheri also said that he was part of the “second layer” of students who took over the US Embassy in November 1979. At the time he was an engineering student at Amirkabir University.