Is prominent conservative cleric really a threat to Rouhani?

While Iranian President Hassan Rouhani and cleric Ebrahim Raisi have to some extent shared backgrounds in public service, the incumbent Iranian president’s greater experience in politics remains the biggest thorn in the side of his conservative opponents. 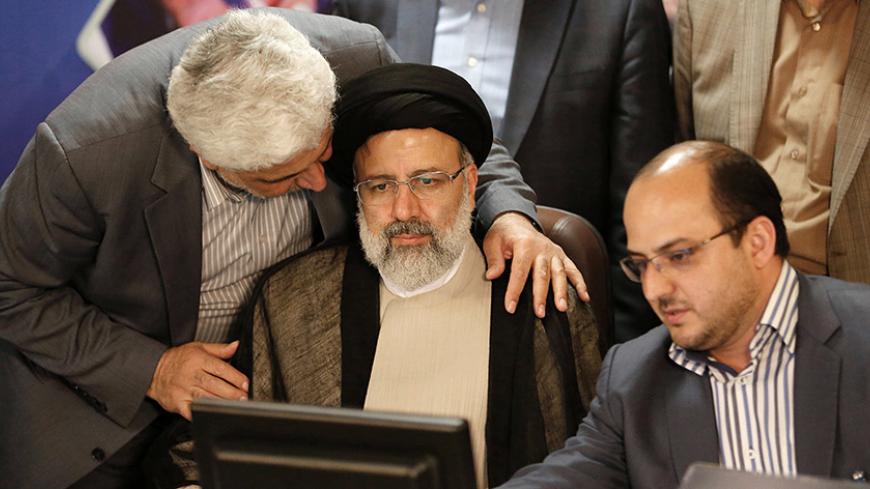 Iranian cleric and head of the Imam Reza charitable foundation Ebrahim Raisi (C) registers his candidacy for the upcoming presidential elections at the Ministry of Interior in Tehran, April 14, 2017. - ATTA KENARE/AFP/Getty Images

TEHRAN, Iran — Iranian President Hassan Rouhani is aiming for another term in office, and as such the May 19 elections in Iran pose an ultimate vote of confidence. Rouhani’s aides do not seem to doubt his prospects as they believe this government has done almost everything it could to make the situation in the country better than it was four years ago. “It is true that not all the promises were met due to several circumstances, yet it is important to highlight the number of achievements that were made in these difficult years,” a political source close to Rouhani’s camp told Al-Monitor on condition of anonymity.

He added, “It has been only one year and a few months since the nuclear deal was implemented; everything needs time but people can see the differences — we are exporting more oil and have more investments and the coming months are going to have more [in store] for the nation and the people.”

Those close to Rouhani believe his conservative opponents know well that the coming months are going to see improved economic conditions for the country. “They want to hijack this government’s achievements. They are attacking the president and his government, sabotaging almost everything, and when they come to power they will claim that they saved the country — but with what? With the tools and successes of this government. They don’t even have a clear program for change,” the source said.

The deadline to register as a candidate for the election ended April 15. More than 1,600 nominations were studied by the Guardian Council, which gave the green light for six candidates on April 20. In the previous presidential election, in 2013, less than half as many registered. This phenomenon has raised criticism from Ayatollah Naser Makarem Shirazi, who warned that some of the nominees are trying to make fun of the regime. Yet Tehran University professor Zeinab Ghassemi believes that the registration of very diverse political figures for the elections has increased the dynamics of the competition.

Ghassemi told Al-Monitor, “The media is playing a very important role in heating up the elections: Extensive coverage of the candidates’ registration process in the news media and on social media has triggered substantial interest and vigor among the public.”

Only two candidates are seen as potentially able to defeat Rouhani: Ebrahim Raisi, the custodian of the holy shrine of the eighth Shiite imam, and Tehran Mayor Mohammad Bagher Ghalibaf. Of the two, Raisi seems to be the one who could pose the most serious threat to Rouhani.

The public service paths of Raisi and Rouhani have been very similar since the Islamic Revolution. Raisi is 12 years younger, but old enough that both he and Rouhani were called to service by Islamic Republic founder Ayatollah Ruhollah Khomeini. Raisi mainly carried out judicial duties in different regions in Iran. Both Rouhani and Raisi are members of the Assembly of Experts and hence have high qualifications with regard to clerical studies; both are mujtahids. While Rouhani holds a doctoral degree in constitutional law from Glasgow Caledonian University in Scotland, Raisi obtained a doctoral degree in Islamic jurisprudence and law from Shahid Motahari University in Tehran. But the real advantage Rouhani has over Raisi — with respect to public service — is his extensive experience in politics, which began in 1980 when he became a member of parliament and reached its peak in 2013 when he became president.

Raisi’s name has been mentioned in several reports as one of the favorites to succeed Supreme Leader Ayatollah Ali Khamenei, but his main disadvantage remains a lack of day-to-day political experience — a shortcoming that could be overcome if the 56-year-old cleric becomes president.

To supporters of Raisi, this is not an issue.

“Seyed Raisi is running for change in Iran; he said he is not part of any party or political current. He is running to bring prosperity to his fellow countrymen after all these years of mismanagement and corruption,” a Principlist source active in the election process told Al-Monitor. “Six months before the elections, there was no real candidate to unite the Principlists behind him. All the other names are respected politicians, yet not unifiers — until the name of Seyed Raisi was suggested by some young activists who thought he has the power to change and unite at the same time.”

According to the source, a message was sent to Raisi, who replied that he would study the request; subsequently, people called on him to run for president. The source added, “He accepted the nomination [to potentially be the candidate] for JAMNA [Popular Front of Islamic Revolution Forces] because he thought it was time to make a real change in Iranian political life. Yet this still does not mean he is part of the Principlist camp. He is of equal distance from all factions, and if other factions decide to nominate him, he would accept [their nomination].”

Despite this kind of rhetoric, some believe that such a consensus is perhaps too difficult to reach in Iran. Political splits are having dire implications on the electorate, whereas the divisions among supporters of the two main Reformist-moderate and Principlist currents in the country seem to be deeper than they were a decade ago. The post-2009 election politics in the country saw the political elite leaning toward using harsh accusations that vary from anti-revolutionary to anti-state. Add to that the exchanged claims of corruption and betrayal.

Ghassemi had a different point of view on this. “I don't think a high level of competition is symptomatic of a division or split in Iranian society,” she said, stressing that countries with low levels of political competition are more likely to fail. She added, “In Iran, especially in the last two decades, there has been heated rhetoric, criticism, debates and news conferences during the presidential elections and the country has moved from [Ayatollah Ali Akbar Hashemi] Rafsanjani to [Mohammad] Khatami and from [Mahmoud] Ahmadinejad to Rouhani. These transitions have taken place through competitive elections and not single-candidate elections or a military coup.”