After his withdrawal from presidential race, who will get Tehran mayor's votes?

Although Tehran Mayor Mohammad Bagher Ghalibaf has withdrawn from the presidential race and urged his supporters to back fellow conservative Ebrahim Raisi, there are doubts about voters heeding his call. 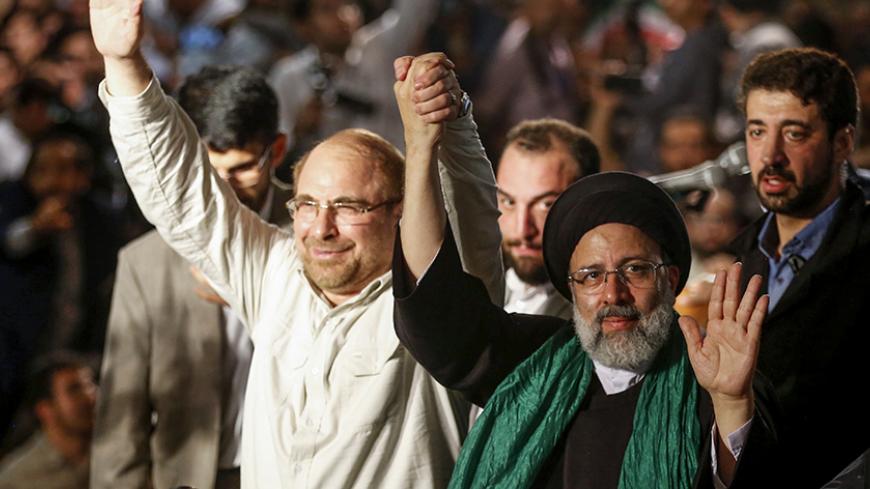 Despite previously dismissing the idea of stepping aside in Iran's presidential race, Tehran Mayor Mohammad Bagher Ghalibaf withdrew May 15 in favor of fellow conservative candidate Ebrahim Raisi. This unexpected move has left political analysts wondering whether it will actually benefit Raisi or, conversely, the incumbent president, Hassan Rouhani, in the May 19 election.

Ghalibaf, a three-time presidential candidate, had run a controversial campaign. On May 8, his campaign adviser, Mahmud Razavi, had tweeted, “Poll results show that Ghalibaf now has more votes than Rouhani and thus will not — under any circumstances — withdraw from this race.” On the same day, Ghalibaf's political adviser, Hossein Ghorbanzadeh, also editor-in-chief of the daily Hamshahri, which is run by the Tehran municipality, tweeted, “If Ghalibaf withdraws, Rouhani will be elected in the first round of voting. He will not, under any circumstances, withdraw from the race. This is a rumor propagated by Rouhani supporters with the hope of inciting fear.”

That said, the opinion polls were not favorable for Ghalibaf, especially after the third and final presidential debate May 12. According to the US-based International Perspectives for Public Opinion (IPPO), his voter support had dropped from 26% on May 6 to 21% on May 14, and the downward trend was continuing. Moreover, most Principlist organizations had rallied behind Raisi, making the situation increasingly difficult for Ghalibaf.

Notably, Galibaf's statement on May 15, four days before the election, did not use the word “withdraw.” It read, “What is important at this point in time is preserving the interests of the people, the country, and the revolution. Considering that this great ideal can only be achieved through a change in the status quo, fundamental and crucial decisions must be made. Therefore, in order to protect this great ideal, I ask my supporters across the country to devote all their potential to supporting our dear brother Hojjat al-Islam wal-Moslemeen [clerical rank below ayatollah] Seyed Ebrahim Raisi and the success of the ‘Government of Work and Dignity’ [Raisi’s campaign slogan].”

Ghalibaf has clearly asked his backers to support Raisi, but will they listen? The Iranian media has been busy analyzing the matter.

Mohammad Hashemi, brother of the late Ayatollah Ali Akbar Hashemi Rafsanjani and a former head of the state broadcaster, said in a May 15 interview, “Ghalibaf did not have any votes to transfer to anyone. He had behaved very badly in the debates and had ruined himself. He withdrew because staying on would mean more scandals.”

Gholamhossein Karbaschi, secretary-general of the Executives of Construction Party, one of the most prominent pro-reform factions, concurred with Hashemi's analysis. In an interview with the moderate media outlet Entekhab on May 15, Karbaschi said, “Not all Ghalibaf supporters will vote for Raisi. More than likely, a portion of his votes will go to Rouhani. More importantly, under the best of circumstances [had he not withdrawn], Ghalibaf would have finished third, which is why he decided to quit the race.”

Moreover, a look at Raisi’s inner circle shows that virtually all its members were ministers under former President Mahmoud Ahmadinejad (2005-13). Ghalibaf, on the other hand, despite being a Principlist, was always at odds with Ahmadinejad. Therefore, it is unlikely that his supporters will agree to cast their vote for a candidate surrounded by Ahmadinejad ministers.

Perhaps the most important issue to consider, however, is that Ghalibaf is not a charismatic figure. When Rafsanjani was disqualified from the 2013 presidential elections and therefore asked his supporters to vote for Rouhani, voters listened to his request without asking any questions. Ghalibaf, on the other hand, does not have a similar hold on his supporters; they will not cast their vote for Raisi simply because Ghalibaf has asked them to do so. In addition, a majority of Ghalibaf’s supporters are not from religious or middle- or lower-class backgrounds. Unlike the concerns of Raisi’s supporters, who are religious, Ghalibaf supporters are mostly concerned about technocratic issues.

On the other hand, Ghalibaf’s call for his supporters to vote for Raisi could be beneficial to Rouhani by helping the incumbent attract silent voters. A segment of Iranian society is still doubtful about voting. Since they do not follow the campaigns, many simply believe that Rouhani will be re-elected. The recent string of Iranian presidents has been re-elected to second terms, so some voters may decide to sit out the election on the assumption that Rouhani is unlikely to become the first one-term president in decades. Ghalibaf’s withdrawal and forging of an alliance with Raisi could, however, cause them to perceive that the danger to the incumbent is more imminent than they had previously thought and lead them to believe that their not voting could result in Raisi's replacing Rouhani.

The Principlist media outlets have supported Ghalibaf’s decision to withdraw. In a May 15 speech, Raisi thanked Ghalibaf for stepping aside, calling it a revolutionary act. That same day, former parliament Speaker Gholam-Ali Haddad-Adel also thanked Ghalibaf, characterizing his withdrawal as a sacrifice, and asked his supporters to vote for Raisi. Moreover, the conservative theoretician Mohammad Reza Bahonar expressed the hope that the Tehran mayor’s votes would be transferred to Raisi.

Not all Principlists, however, agree on the matter. Also on May 15, prior to Ghalibaf’s official announcement, Parviz Amini, a Ghalibaf adviser, wrote on his Telegram channel, “Mr. Ghalibaf, don’t make the mistake of withdrawing. If you do, Rouhani will win this election.”

Thus, doubt remains as to whether Ghalibaf’s votes will go to Raisi. According to an IPPO poll published May 16, 20% of voters who had planned to cast their ballots for Ghalibaf cited Rouhani as their second choice. Meanwhile 30% of Ghalibaf supporters will vote for Raisi, and 16% will not vote for anyone. IPPO revealed Rouhani’s numbers to be on the rise, and as of May 15, four days before the first round of balloting, had him winning 56% of the vote.