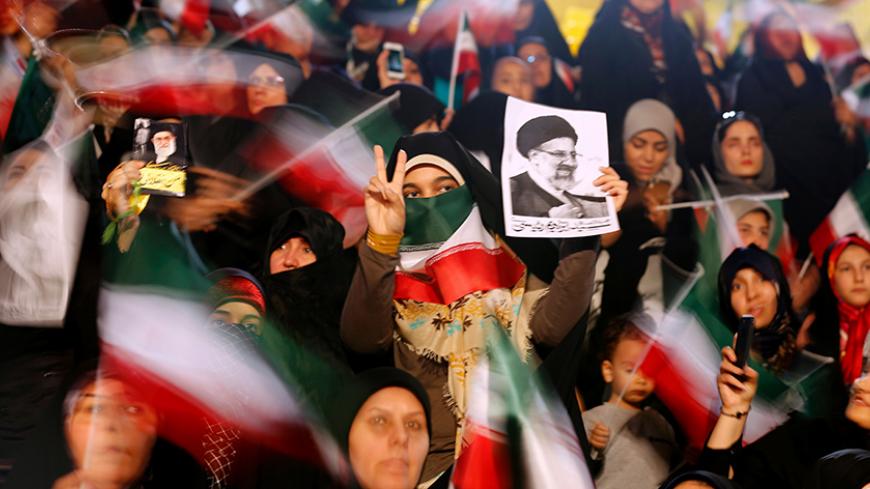 TEHRAN, Iran — Until just a few months ago, not many Iranians were familiar with the name Ebrahim Raisi. The 56-year-old cleric entered the game last year when he was appointed to head Iran’s largest charitable foundation, Astan Quds Razavi, which oversees the holy shrine of the eighth Shiite imam, Reza, in the northeastern city of Mashhad. Raisi, a former prosecutor and deputy chief justice who once headed Iran’s anti-corruption committee, wants to be the Islamic Republic’s 12th president. Generally labeled as a Principlist, Raisi “wants to free himself from any partisan affiliation and run as an independent,” according to an aide who spoke to Al-Monitor on condition of anonymity.

In Iran, the color green is widely associated with the Green Movement, which emerged from the disputed 2009 presidential elections. Raisi chose green as his campaign color. The source close to the presidential candidate explained, “This is the color used by revolutionary grandsons of the prophet. We are using this color to give it back its real meaning.” The source added that Raisi is looking forward to becoming president of all Iranians rather than a president with partisan affiliations. “One of the main objectives will be freedom of partisan life under the framework of the Islamic Republic. There’s a need to get the viewpoints of all parties and currents in the country to solve our problems, yet differences among them shouldn’t have implications for how we solve our dilemmas.”

Opponents of Raisi’s candidacy say he’s not up to the job, citing his limited political experience. His critics argue that the presidency is no place to gain experience.

“Iran is going through a very critical phase. We are facing serious internal challenges, in the middle of a regional confrontation and on the international level” and nothing is predictable, a political source close to President Hassan Rouhani’s campaign told Al-Monitor on condition of anonymity. “Under such circumstances, Iran needs an experienced president, someone who knows how to deal with difficult times. Among all those who are running, the only person ready to continue the job is known to everyone.” In the latest presidential debate on May 5, candidate Eshaq Jahangiri indirectly criticized Raisi’s candidacy, saying, “A president needs to have experience in dealing with domestic and international issues,” adding that the political landscape of Iran is not a place for a novice.

Raisi’s aide believes his candidate has a comprehensive program for governance in Iran. “Seyed Raisi’s main goal remains to preserve the dignity of Iranians — all Iranians: workers, families, women, men, the elderly and the youth — along with maintaining pride in Iranian identity.” To him, relations with all countries, including both friendly states and adversaries, should preserve Iran's pride and serve its national interests.

“With respect to international relations, Iran is ready to have good relations with all countries around the world, except for Israel,” said the aide. Asked whether the United States is included, he said, “Our priority with respect to dealing with all countries is respect for our national dignity and pride, and at the same time, our internal ability to solve problems shouldn’t be hampered by excuses such as [lacking] foreign capital and foreign investment. National independence cannot be exchanged for [material] gains.” He added, “The main slogan of our international relations policy is ‘mutual interests and mutual gains’ for both sides.”

Raisi’s position on the nuclear issue was clear during the televised debate on May 5. The cleric, who appeared very calm and composed but left the public without a clear impression of his positions in the first debate on April 28, changed his tactics and adopted a different strategy in coordination with his ally Tehran Mayor Mohammad Bagher Ghalibaf and other Principlists. Raisi was keen to present himself as very determined not to allow any violation of Iran’s nuclear rights. While expressing respect for the nuclear deal, he stressed that it has failed to end Iran’s economic recession. He said Rouhani had promised that all sanctions would be removed after the deal, but that this has not happened. Still, Raisi and the other Principlist candidates did not offer any alternative paths for Iran.

Several opinion polls conducted before and after the debates show Raisi still far behind incumbent Rouhani and Ghalibaf. The next debate is scheduled for May 12.

“Elections in Iran are contested up to the last minute,” Raisi's aide told Al-Monitor, “There is still a debate to come, and people are getting to know Mr. Raisi through his nationwide tours and gatherings. People in Iran want someone to rid them of corruption and the economic recession, give them more hope, breathe life into the political arena and bridge differences among Iranians. The right man for all of the above is Ebrahim Raisi, and therefore, we are sure of that by May 19, people will be aware that such a candidate exists, and the good news is that they can vote for him to be their president.”