As the deadline for Iran's presidential candidates to register their nomination approaches, conservatives are unable to reach a consensus over a single nominee. 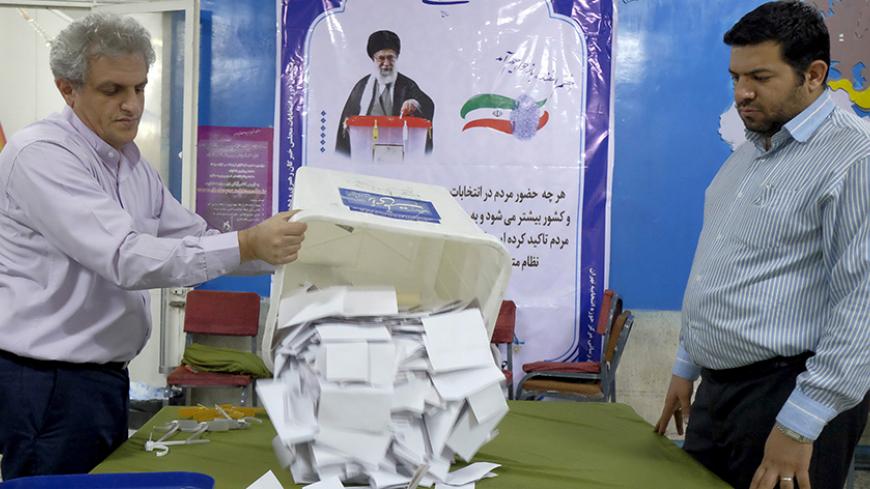 Election officials count ballot papers after the closure of polling stations during elections for the parliament and Assembly of Experts, which has the power to appoint and dismiss the supreme leader, in Tehran, Iran, Feb. 26, 2016. - REUTERS/Raheb Homavandi

Iranian officials announced that registration for the May 19 presidential election will start April 11.

Ali Asghar Ahmadi, the head of the election center at Iran’s Interior Ministry, stated April 3 that the presidential candidates will have the opportunity to register for the election from April 11-15.

Soon after the end of registration, the Guardian Council, which is tasked with vetting the candidates, will study the candidates’ political backgrounds and announce whether they are eligible to run in the election. In the 2013 presidential election, the Guardian Council unexpectedly disapproved of the candidacy of Ayatollah Akbar Hashemi Rafsanjani, who had twice before served as president of Iran. The disqualification prompted criticism from moderates and Reformists.

Currently, none of the likely presidential candidates have announced their decision to run. Moderates and Reformists have formed a coalition and announced that their sole candidate is incumbent President Hassan Rouhani. However, Rouhani himself hasn’t said a word about his decision, though his entourage has said he will surely run for president.

In the opposing conservative camp, the hard-liners' goal is to reach consensus on a single candidate. The possible conservative candidates are as follows: Ebrahim Raisi, the custodian of the holy shrine of Shiite Imam Reza; Saeed Jalili, the former chief of Iran’s nuclear negotiations team; Mohsen Rezai, the former chief commander of the Islamic Revolutionary Guard Corps; Mohammad Bagher Ghalibaf, the mayor of Tehran; Rostam Ghasemi, the former oil minister under President Mahmoud Ahmadinejad; and Ezzatollah Zarghami, the former head of Iran’s state TV.

However, hard-liners under the leadership of Ayatollah Taghi Mesbah Yazdi are more inclined to see Raisi as the only candidate of conservatives. They have already started campaigns to pressure other possible candidates to withdraw in favor of Raisi. Although Raisi himself hasn’t spoken about his candidacy, sources close to him have said he will announce his final decision April 6. His decision might be tied to the conservatives’ April 5 coalition summit, when they will declare their five candidates. Based on this mechanism, the four other candidates will withdraw in favor of the one who has the greatest chance of victory. Despite this, some news reports allege that certain candidates, like Jalili, don't want to leave the race in favor of a single conservative candidate, which might be Raisi.

Moreover, former hard-line President Ahmadinejad, who was advised by Supreme Leader Ayatollah Ali Khamenei not to run in the election, has encouraged his former vice president, Hamid Baghaei, to nominate himself. Ahmadinejad has increasingly tried to distance himself from the conservatives to attract the “grey voters.” It is noteworthy that the segments of Iranian society that aren't amenable to conservative views do not usually vote, but when they do, they have changed election results, like the 2013 presidential election that led to Rouhani’s victory.

Without naming Raisi, who is a member of the Guardian Council’s monitoring committee, Ahmadi, the head of the election center at Iran’s Interior Ministry, said that all individuals who have a direct role in the presidential election must resign before registering their candidacy.

Meanwhile, on April 3, Iran’s Attorney General Mohammad Jafar Montazeri warned the media about publishing false reports and insulting the candidates during the election.

Montazeri said he has ordered prosecutors across the country to monitor cyberspace “second by second.” In Iran, news websites and channels are very popular and have majorly impacted the results of recent elections.

“We are informing all the persons who intend to enter the race, and all the people who have activities in this arena, not to degrade and insult others and violate the law. … And if they do, they shouldn’t complain [about their] site [being] blocked,” Montazeri said.