Millions of Israelis had to sit in shelters in recent days, in fear of Hamas rockets, but their greatest concern now is the crumbling of Jewish-Arab coexistence inside the country. 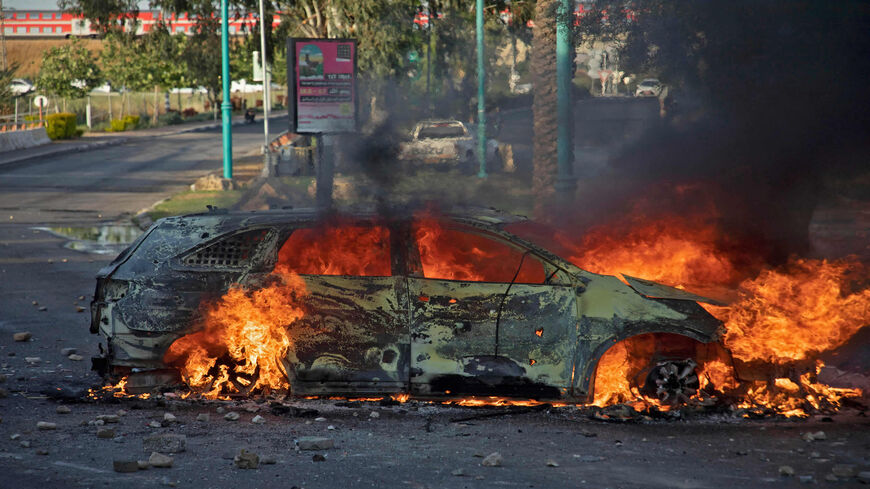 An Israeli police car burns after an Arab Israeli demonstration following the funeral of Mousa Hassouna in the central city of Lod, near Tel Aviv, Israel, May 11, 2021. - -/AFP via Getty Images

The premature death of what has been billed in recent weeks as a “government of change,” tentatively scheduled to be sworn in next week and send Prime Minister Benjamin Netanyahu to the Knesset opposition benches, is the direct outcome of violent clashes in mixed Jewish-Arab towns this week.

The violent and unusual confrontation that erupted earlier this week between Israeli Arab and Jewish citizens took Israelis and their political leadership by complete surprise. It broke out even as Israel and Hamas engaged in yet another round of deadly fighting, with rockets from the Gaza Strip raining down on Israel and bombs from Israel dropping on Gaza. However, despite the daring Hamas missile launches targeting Jerusalem and Tel Aviv that have sent millions into shelters, Israelis are apparently more concerned about the domestic violence in their midst.

On May 12, after three days of rockets and riots, Bennett could no longer withstand the pressure of his political base, comprised mostly of right-wing, religious Israelis, against the historic coalition government he has been trying to form with centrist, left-wing and Arab parties.

Up until the rioting broke out, he had appeared committed to this political experiment designed to unseat Netanyahu and dismantle his right-wing, ultra-Orthodox coalition. But the shocking events of this week disrupted what was left of the fragile support of Bennett’s fellow lawmakers for the controversial move, which had already tarred Yamina as a traitor to the nationalist cause.

In fact, a deep rift had opened up on the political right even before this week’s rioting, with many feeling cheated, angry at losing the hold on power the right had enjoyed under Netanyahu and his Likud party for the past 12 years. They directed their fury at Bennett and his six fellow Yamina lawmakers, calling them every name in the book and trying with a mixture of threats and blandishments to pull them back into the Likud-led fold. For weeks, Yamina appeared to be resisting, determined to stick with the “bloc of change.”

On May 10, Israel marked Jerusalem Day, the annual celebration of the city’s unification following the 1967 Arab-Israeli War. With tensions in Jerusalem increasing, Hamas fired six missiles toward the city, setting off the most extensive fighting between Israel and Gaza since the 2014 war.

Just before the rockets landed, Yamina, Lapid, Abbas and four other parties had been putting the final touches on their broad-based coalition. The ensuing eruption of violence placed their initiative under grave threat. They all knew Israel would have to respond to the violation of its sovereignty.

But the flare-up with Gaza was just a trailer for the real drama that unfolded within Israel, with young Arab Israelis, likely incited by Hamas, turning on their Jewish neighbors in two towns that had been symbols of coexistence — Lod and Acre. Israelis hiding out in safe rooms and shelters realized that the missiles threatening their lives were in many ways less dangerous than the rioting and lynching they were seeing in live footage much closer to home.

On May 11, the town of Lod in central Israel turned into a war zone. The city in which religious Jews and Arabs live side-by-side, many in the same apartment blocks, was being torn apart. Arab gangs were torching synagogues and cars owned by Jews, throwing firebombs at Jewish homes and vandalizing property. The northern port city of Acre was also on fire, literally, with Arabs torching a popular Jewish-owned restaurant — Uri Buri — and hotel, where an 84-year-old Jewish man was severely injured by smoke inhalation.

What stood out throughout these outbreaks of violence was the country’s deeply flawed governance as reflected in its prolonged political crisis. Not only did the leadership appear helpless, the police seemed unable to control the spread of unrest, prompting some Jews to feel compelled to defend themselves.

Netanyahu himself was also caught unaware. During the early hours on May 12, after he spent hours at military headquarters in Tel Aviv monitoring the war with the Gaza Strip, he rushed to Lod at 2 a.m., his grey, troubled countenance telling its own story. He convened an impromptu news conference announcing that he had authorized the deployment of border police units to deal with what he described as “anarchy.” Anyone who knows Netanyahu well could sense his distress. While he has meticulous contingency plans for dealing with Gaza, the volcano erupting under his nose seemed like the eruption of a civil war.

The chaos on the streets continued May 12, in some cases escalating despite the deployment of border police troops on the streets. A piece of memorable footage that was to play over and over in the days to come showed a Jewish mob of right-wing extremists kicking and beating an Arab driver whom they had pulled out of his car on the coastal promenade of the Tel Aviv suburban town of Bat Yam.

At the same time, reports emerged of a religious Jewish teacher whose car was pelted with stones in Acre, where an Arab mob pulled him out of his car and beat him. He was taken to the hospital in a medically induced coma. That event, as well as the shooting and injuring of two Jews in Lod and the synagogue arson prompted talk of anti-Jewish “pogroms” and fury at the idea that Jews were not safe in the Jewish land.

Netanyahu and Defense Minister Benny Gantz, bitter political rivals, seemed united as they faced these two fronts — with Hamas and with domestic unrest. “It was clear to us that what worried them more was the events inside Israel. This was something different that no one expected, something far more frightening. They had to stop the Arab civil unrest but were not sure they would succeed,” a security source close to both men told Al-Monitor on condition of anonymity.

Israel has been plagued with a political and civilian crisis for over two years. Its focal point is Netanyahu, standing trial on charges of bribery and corruption but still widely popular. This week’s domestic unrest appears to echo this national crisis and will likely impact politics and life in Israel in the coming years. The coexistence between Arabs and Jews will face one of its greatest challenges. Israel’s political leaders — Jews and Arabs — could channel it into positive directions of integration or revert to the paradigm of polarization and boycotts.