The cease-fire between Israel and Hamas is in place and working for the moment, but tensions within Jewish-Arab mixed cities inside Israel have not disappeared yet. 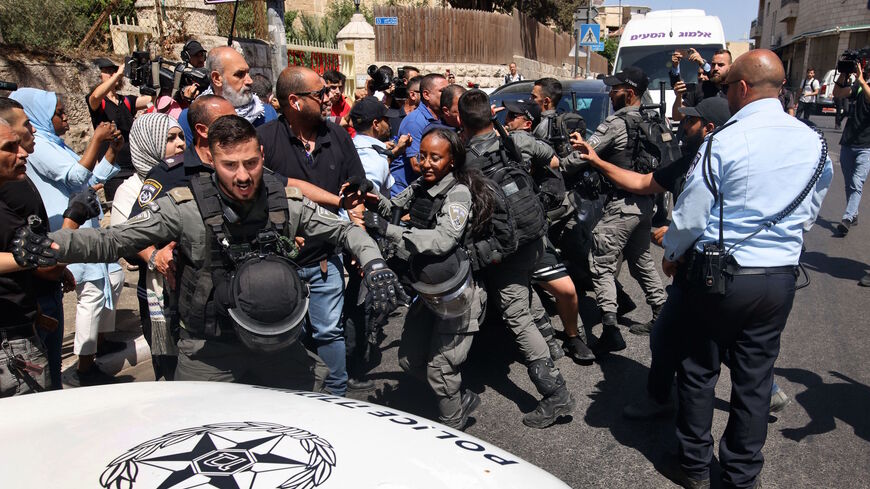 Palestinians scuffle with Israeli security forces outside the court in Jerusalem on May 26, 2021, during a protest over Israel's planned evictions of Palestinian families from homes in the eastern sector's Silwan district. - AHMAD GHARABLI/AFP via Getty Images

Dozens of people demonstrated this morning outside the Jerusalem District Court, which had convened over a petition filed by two Palestinian families from the Silwan neighborhood against their imminent eviction. Two demonstrators were detained by police for disrupting public order. The court session ended without a ruling. The judges said they will rule on the matter after the High Court rules on similar cases that have been presented to it recently.

In parallel, the Knesset today held a session on the ongoing violence in mixed Jewish-Arab cities. Reportedly, Public Security Minister Amir Ohana and Arab legislator (Labor) Ibtisam Mara'ana exchanged words. Ohana was quoted as saying that "some of Israel’s Arab citizens turned weapons against Jews, against police officers, against citizens." Mara’ana responded, "Stop inciting and do your job." Ohana also said that "five synagogues were torched, but no one torched a mosque; Jewish citizens were lynched and fired at." To that, Mara’ana reminded him that an Arab citizen was killed in the city of Lod. Ohana announced at the same session that the reserve unit of Israel’s border police will be reinforced and thousands of extra police officers will be recruited in the coming three years.

Israel and Hamas agreed May 21 on a cease-fire. Evidently, the agreement did not calm tensions inside Israel, though these tensions were at the origin of Hamas’ recent rocket campaign. Tensions had risen in Israel at the beginning of May. Residents of the East Jerusalem Palestinian neighborhood of Sheikh Jarrah were demonstrating then against court orders for their eviction after settlers allegedly proved to the court ownership over their houses. At the same time, tensions rose by the Damascus Gate near the Jerusalem Old City, where Arab youngsters traditionally gather during the month of Ramadan, and on the Temple Mount compound.

All of these incidents were followed by clashes and attacks by Arabs against Jews and Jews against Arabs in several cities across the country. The Gaza rocket campaign, launched when tensions first erupted on Temple Mount, encouraged more violence in Lod, Ramle, Jaffa, Jerusalem, Acre and Bat Yam. Far-right Jewish groups have been trying to enter city centers to generate conflicts with Arabs. In Jaffa, some Arab citizens have taken matters into their own hands by organizing local neighborhood watch groups, especially in the late night hours.

A statement issued by Israel police on May 23 said some 1,550 people have been detained in the past two weeks, since May 9. One hundred and fifty indictments were presented to the courts, in some cases with several people accused together. The statement also said the police were launching that evening Operation Law and Order to deter and apprehend anyone disturbing public order or acting violently. Thousands of security forces from different policing units will be deployed to carry out these raids, the statement read.

Hundreds of police officers entered last night the Jewish-Arab mixed city of Jaffa, adjacent Tel Aviv. It was part of the abovementioned nationwide crackdown on civilians suspected of participating in the recent riots around the country. Together with the mixed city of Lod, Jaffa had become in recent days an epicenter for riots and clashes between citizens and police forces, and between Jews and Arabs. A video posted by the police on Facebook yesterday shows police officers searching homes of suspects in the mixed city of Ramle in the center of the country and retrieving illegal weapons there.

Yesterday, police suspended an officer after a video emerged of him apparently shooting a sponge-tipped bullet into the back of a Palestinian teenage girl in the Sheikh Jarrah neighborhood. The footage suggests 16-year-old Janna Kiswani was shot as she was obeying the officer’s order to go back into her home. Kiswani is still hospitalized and is being treated for a fractured vertebra and breathing difficulties.